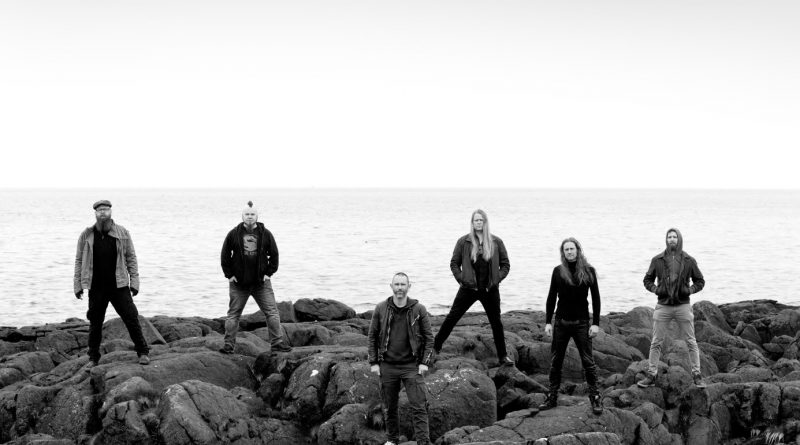 The Icelandic Viking Metal Heroes SKÁLMÖLD present the very first video for their upcoming album Sorgir (eng.: sorrow). SKÁLMÖLD, known for their unique sound, taking you with “Sverðið” (eng.: sword) right into one of the four stories full of tragedy and death. But beware, there are two sides! As every story is told from two perspectives, first called “Sagnir” (tales) and second “Svipir” (ghosts), the last four songs of Sorgir will give you a different view of the previous experience.

While SKÁLMÖLD are currently playing their sold out shows together with the Icelandic Symphony Orchestra (Sinfóníuhljómsveit Íslands) in their hometown Reykjavík in front of fans from 37 (!) different countries, you can be amongst the first ones to listen to “Sverðið”!

SKÁLMÖLD states: “We are happy to share with you the first single from our album “Sorgir” (“sorrow”). This (quite folky) song is an epic tale of a brave viking fighting a battle and winning against the odds, until his sword brakes in half and he is killed.”

Watch the lyric video for “Sverðið” below:

Sorgir is a dark, cold and tragic album dealing with Icelandic myths of superstition, shadows, spectre and despair. Look elsewhere for something light, warm and comforting! Soaring melodies, folk elements and harsh outbursts remind of the chilly beauty of SKÁLMÖLD`s home country – Iceland, the eternal and awe-inspiring source of inspiration for neckbreakers such as “Gangari” and the gripping epic “Mara”.

NORTHWARD, the hard rock project from masterminds Floor Jansen and Jorn Viggo Lofstad, have finally unleashed their debut single ‘While Love Died’, alongside a video for the track. The single is a part of their upcoming debut album “Northward” (release: October, 19th).

“We are both very proud and happy to finally get to show you all what we have been up to. Here is our first single! We hope you will enjoy it”, comments guitarist Jorn Viggo Lofstad.

The video was produced by Ville Lipiäinen (NIGHTWISH, PAIN and more)

Furthermore, the band has revealed the cover artwork – created by Hannes Van Dahl and Chris Rörland – and tracklist:

Pre-order the new album “Northward” via this link: http://nblast.de/NWNorthward

RISE OF THE NORTHSTAR – release brand new track, ‘This Is Crossover

Europe’s biggest crossover band, RISE OF THE NORTHSTAR, have released the brand new track ‘This Is Crossover’. The song comes off the band’s upcoming second full-length album, “The Legacy Of Shi”. Check the song out here:

Get the song here: http://nblast.de/ROTNThisIsCrossover

The band recently released a video in which they explain the concept of the so called “Northcards” that will be included in every digipack of »The Legacy Of Shi«.

Earlier the band had announced that the digipack edition of the album will include 1 of 10.000 so called “Northcards” (also see graphic below), featuring one of the band’s members. 10 of the cards will be different “Shi Northcards”. Find it and you will be rewarded.

“The Legacy Of Shi” will be released on October 19 via Nuclear Blast (Sharptone Records in the USA, Ward Records in Japan) and was recorded with GOJIRA‘s Joe Duplantier in his Brooklyn, NY-based Silver Cord Studios. The album will contain 11 brand new songs and one additional bonus track (vinyl and Japan only) with a running time of 44, respectively 48 minutes.

The album will be available as CD digipack, various vinyl colors (black, white, black/white bi-colored) and as digital download/stream via all known platforms.