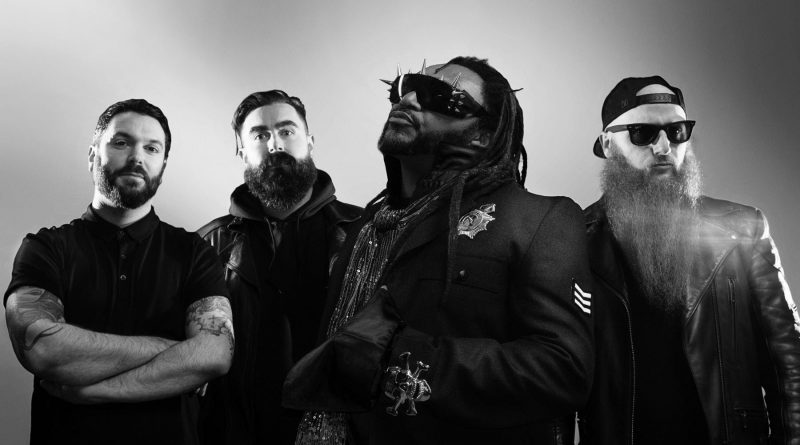 “Machine” is the first single from SKINDRED’s upcoming album entitled “Big Tings” – out on April 27th 2018 via Napalm Records. The band has already released a first album appetizer in the form of a teaser for the track “Machine”. Now it’s time to unleash the full music video which features actor and stunt man Neil Chapelhow best known for his work in new films Wonder Woman, Fantastic Beasts and where to find them, The Commuter, King Arthur and many more.

The band states:
“When we were told we were doing a video with the stunt team thats be behind the marvel films, James Bond and the Bourne films we knew we were in for a good time on the shoot! Throw in Gary from Reef and one of our fav bars in London (Big Red) and you have the ingredients for a really fun video! The idea is don’t judge a book by its cover. Skindred is inclusive. Not Exclusive. So when someone in a rock bar is being teased by some “rockers” for not being the same as them, he hits back! In a big way!“

“Machine” has already been used as both the intro and outro theme to AC/DC frontman Brian Johnson‘s TV show ‘Cars that Rock’ Worldwide and features Reef frontman Gary Stringer lining up alongside the band’s own Benji Webbe on co-vocals and if that is not enough the single also features Motorhead/Bastard Sons guitarist Phil Campbell taking the honours on the guitar solo too!

Get your pre-order HERE!

Winterfylleth have today announced details of their new album, titled The Hallowing of Heirdom, which will be released via Candlelight/ Spinefarm on April 6, 2018. The 12-track album is their sixth studio release, and pushes the boundaries of their sound into new territories.

Elder Mother is the first track to be premiered from the album, which is presented via a lyric video. See below:

Having incorporated elements of traditional English folk music into their previous work, it is on The Hallowing of Heirdom that the band takes a deep dive into this genre, and the result is an entirely acoustic album which is sure to challenge pre-conceptions of the band, whilst retaining their signature spirit.

Drawing lyrical and conceptual influence from ancient folklore, pastoral poetry, riddles, rhymes and odes, as well as early British customs and practices, Winterfylleth present a unique and reverent homage to Ancient Britain. The music draws on the atmosphere, feeling and emotions of their previous albums, but expresses it through acoustic instruments, and in the folk tradition so important to the original formation of the band. Winterfylleth have drawn on their collective skills across a wide variety of musical styles to incorporate interesting, new instrumentation and textures into this most rich of musical tapestries.

With a stable new line up in place since 2014’s The Divination of Antiquity album, and with a ten year anniversary tour under their belts, the UK’s finest proponents of atmosphere and emotion have created what will surely become a future classic in this genre.

Pre-order The Hallowing of Heirdom here

Vöödöö are out with a music video for their debut single ‘Lay Me To Rest’! Their unique sound comes from the bands wide span in musical background and approach. ‘Lay Me To Rest’ music video presents a brilliant four minutes of soulful heaviness with vocals that will take you to different inner landscapes.
Press play and introspect!

The band comments: “We are extremely proud to present the video for our first single ‘Lay Me To Rest’. The video is a story with a twist of sorts, or is it? Being stalked by shadows and chased by darkness, or is it all in our head? The video is a mix between a storytelling plot mixed with shots of the band playing in an old abandoned water power plant factory. Together they create the atmoshpere for the lyrics and the message to blossom. The location of the abandoned factory may remind you of something that was working but now its left for dead. A few decades ago it was the beating heart of a small community, but now it is abandoned and lonely, similar to how we feel when we dwell in the struggles that are imprisoning our mind. The aggressively heavy, though simplistic sound of the song amplifies the aggravation, pain and struggle that is felt throughout the video. The story telling portion of the video was filmed by Gunbjørg Gunnarsdóttir, while the live action band shoots and projector scenes were filmed by Troll Toftenes, who also cut and did the final editing of the video. The inspiration for the ‘Lay Me To Rest’ comes from drummer Giuliano’s own personal experience with loss and hopelessness , and the steps one must dare to take to reach the light at the end of a very dark tunnel.”