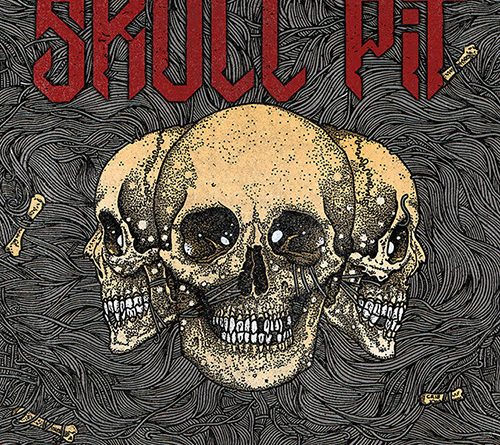 SKULL PIT is a tale of two musicians from opposite sides of the heavy metal spectrum and the planet. Tatsu, hailing from Tokyo/Japan, bassist and mastermind behind the internationally acclaimed Doom outfit CHURCH OF MISERY. And Mem, from New York/USA, singer and frontman of German Thrash pioneers EXUMER!

You can pre-order the album here: metalblade.com/skullpit

Shortly before heading out on their Apocalypse Over Europe Tour, the American heavy metal force RIOT V have released a lyric video for “Caught in the Witch’s Eye” from their recent album “Armor of Light”. In addition, the special vinyl pressing of »Live At Keep It True Festival 2015« which was previously only available as a bonus CD for the bands latest studio album »Armor Of Light«, will be out this Friday.

The band commented: “We are very excited about a couple of things coming up. First we offer a conceptual lyric video from our latest album “Armor of Light” on the great Nuclear Blast records, “Caught  in the Witch’s Eye”. On every Riot record we try to break up the crazy fast songs with mid-tempo groovers, in the great tradition of Dio and Crimson Storm. DVS composed the music and Todd wrote the lyrics about a witch that wants to sell your soul to the devil type of tale, she promises to take away your troubles, but you’ll end up hating the cost you have to pay!
And of course this week we head out for the Apocalypse Over Europe six-week tour with the mighty Primal Fear! We are very excited and feel this will be a great tour as both bands complement each other and sound similar in some ways, and have powerhouse vocalists fronting the bands! Do not miss this one!”

Kentucky’s favourite rock sons, BLACK STONE CHERRY have released their brand new video for Carry Me On Down The Road, taken from their current sixth studio album, Family Tree.Directed by Mike Rodway and shot on the road with the band over the last year, the video features clips of them on stage at the UK’s Download Festival, across Europe and the US.

BSC bassist Jon Lawhon tells us, “If you’ve ever wondered what it’s like or wanted to experience a tour with BLACK STONE CHERRY, the Carry Me On Down The Road music video gives you the coolest and most unique perspective of our touring lives.”  Guitarist Ben Wells continues, “Carry Me On Down The Road is one of my personal favourites on the album.  I remember as we were writing it and creating these riffs, I knew we had something unique and different to anything else we had done before.  To me, it’s a catalyst song for the overall vibe of Family Tree.”

The song is taken from their newest album, Family Tree which landed at No. 7 on the UK Official Album Charts, No. 11 in the album chart in Germany and No. 8 in the Current Rock Albums chart in the USA .