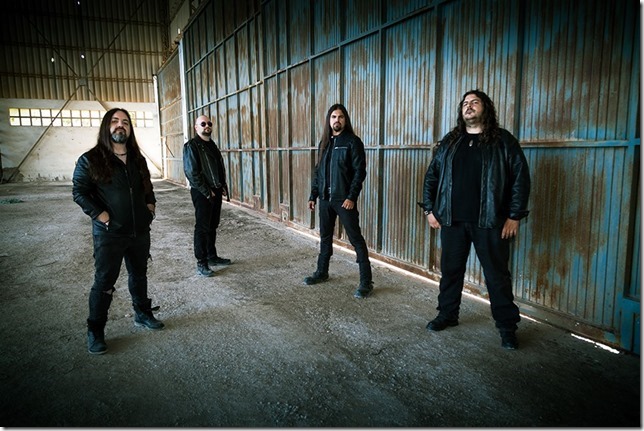 SnakeyeS, the band started by José Pineda, Justi Bala, and Carlos Delgado (from the former Spanish band SPHINX) together with Romanian singer Cosmin Aionita (9.7 RICHTER) releases its second album “Metal Monster” this week. The “Metal Monster” video, available below, was recorded and directed by Leo Traverso:
The band comments on new the album: “Metal Monster is our «creature», our most ambitious project yet, a true Heavy Metal burst of energy, a declaration of intent which aims to seal the band’s own style and consolidate SnakeyeS both nationally and internationally.”
A very special edition of the new album, titled the “Monster Pack” can be ordered exclusively from the band’s website: www.snakeyes-metal.com. The “Monster Pack” will include the following items:
·       New “Metal Monter” album on audio CD
·       “Metal Monster” official t-shirt
·       Exclusive “Metal Monster” guitar pick
·       “Metal Monster” poster
·       SnakeyeS post card signed by the band
·       Exclusive “Mask of Reality” single on audio CD, including the brand new song “The Hunt”, not available anywhere else
Facebook: www.facebook.com/SnakeyesMetal
Official website: www.snakeyes-metal.com.

Since their inception in 2004, American-Brazilian extreme fight metal act ENDRAH have managed to advance the boundaries of hardcore and death metal into a highly technical, brutal and overwhelming combination. Over the years, they have unleashed five releases, “Demonstration” (2004), “Endrah” (2016) (Coretex Records (EU), Dynamo Records (BR)), “The Culling” (2012) plus single “Cadáver na Barragem’ (2012) and “Shoot, Shovel, Shut Up” EP (2016).

Currently working on their next album, ENDRAH have posted a music video for their new single “Your Life Deleted”, which features the debut of their new drummer Henrique Pucci, a former member of Paura and Project46. The track was produced by Tiago Hospede with cover art by Hugo Silva (Abacrombie Ink).

Watch “Your Life Deleted” below:

‘Egyptology’ will also be aired during the new episode of Showtime’s Shameless, on November 19th at 9PM ET/PT. For more information about Shameless, please visit: sho.com/shameless

Mother Feather front-woman Ann Courtney says of the song, “I wrote ‘Egyptology’ after doing an archeological dig of my soul. It’s pure pop myth–if ancient Egypt looked like the Bowery in 1970’s NYC. It’s a story of rebirth into a supremely fabulous rock and roll afterlife.” Of the new lyric video, Courtney says, “Isaiah King has been a trusted collaborator ever since we made the ‘Mother Feather’ video together. We knew he could build upon the amazing work he’d done with the ‘Egyptology’ single cover artwork, and he blew us away with the final result. It didn’t hurt that he’d taken a trip to Egypt a few years before and had sketchbooks full of incredible material to incorporate.”

Mother Feather will release their upcoming album in 2018 via Metal Blade Records. “The newest songs for the album were written last fall and winter in the midst and aftermath of the US presidential election,” Courtney comments. “The political climate and outcome were personally devastating, but it also re-ignited my sense of purpose. I locked myself away to write, face my depression, and stare down some uncomfortable feelings. Truthfully, I went to some very dark and lonely places. So there’s a lot of fever – and intimacy – in the new music. When I emerged from my self-exile, I discovered my band waiting for me on the other side, so there’s exuberance and catharsis there too. It’s good to have friends, ya know?! Together, we worked to develop the songs and shape them into some of Mother Feather’s best, most eclectic work yet. We couldn’t be more excited for this opportunity to continue our work with Metal Blade.”