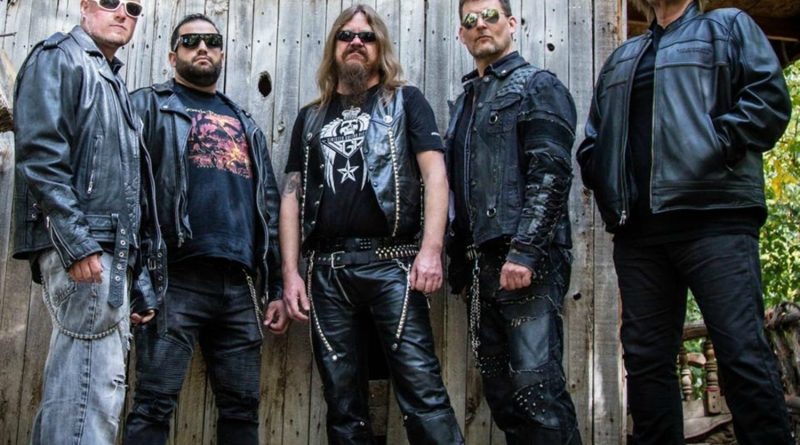 American power metallers SONIC PROPHECY are set to unleash their third full length “Savage Gods” via Rockshots Records on January 19, 2018. Featuring 10 fist pounding tracks rooted in traditional heavy metal melded with the symphonic beauty of power metal, SONIC PROPHECY capture the excitement and sound of such bands as Iron Maiden, Judas Priest, Helloween, Hammerfall and Kamelot while blending other musical styles to arrive at a sound all their own.

The band’s new music video and first single “Night Terror” can be viewed below:

“We think our fans will love this album! Savage Gods, as a record, basically combines all of the things I think people liked about our previous releases and then moves us forward into new areas musically and lyrically. For our fans, there will be no mistaking this is Sonic Prophecy, but we definitely cover some new exciting ground on this record.”

“Savage Gods” follows SONIC PROPHECY‘s 2015 sophomore release “Apocalyptic Promenade” (Maple Metal Records), an album that combined the melody and beauty of symphonic power metal while maintaining the crunch, drive and power of traditional metal plus their 2011 debut “A Divine Act of War”, which had its music placed in the television series “Rock n’ Lock”, the video game “Volgarr the Viking” and movie Danny Trejo’s “Vengeance”.

The upcoming release lyrically covers many topics, from quests and medieval wars, to mechanized genocide, to the dangers associated with extremist ideologies. Broadening and stretching their musical palate, “Savage Gods”will give fans an adventurous listening experience.  It’s an album that combines melodic hard rock, driving heavy metal, and chest pounding anthems in a way that is uniquely Sonic Prophecy.

“This is pure heavy metal with driving guitars, thundering drums, and some of what I feel is my best vocal work to date. With songs “Night Terror, “Unholy Blood” and the album title track, we’ve really laid down a brutal sonic backdrop, along with keeping the melody, which is important to our music.” adds vocalist Shane Provstgaard

Following “Savage Gods” release, SONIC PROPHECY has plans to hit the road and tour across North America, Europe and beyond. The band has performed with Tyr, Alestorm, Ratt, Cinderella, Accept and Sabaton.

After having played various festivals all across Europeand relentlessly touring with retro rock outfits like Blues Pills and Kadavar in promotion of their critically acclaimed Monkey album, Slovenian heavy blues rock steam machine STRAY TRAIN now present Heading For The Sun, their first official music video that you can watch below:

The song is taken from their upcoming second album Blues From Hell(Nov 24th, 2017) and represents it like no other, as guitarist Boban Milunovic points out:

“‘Heading for the Sun’ is a song about unconditional love. In negative times like these, Lennon’s words ‘All you need is love’, seem to be more important than ever. When we started to work on our new record, the opening riff for this song somehow stood out. It represents our new album in all musical aspects and it has all the ingredients that make Stray Train music what it is.Needless to say, we were pretty much sure right away, this is going to be the song for the band’s first video. The idea for the video itself came spontaneously and since Luka (vocals) is a passionate custom bike builder it was pretty logical to have a storyline that visualises and supports the lyrics.”

Not only was the video shoot personally rewarding, it also became a spiritual experience for the band:

“We shot this video near Split (Croatia) with a very talented director named Marcela Zanki. We just gave her the basic idea and all the rest is Marcela’s work. On spiritual level, the location couldn’t have been better. Once we arrived there at 7:00 on that extremely hot September morning we realised that on this very site, not too long ago, two different ethnical and religious groups were fighting each other in a pointless yet very bloody war. It was not planned at all but now the video bares a deeper symbolic meaning for the band as well.”

Blues From Hell will be released via SAOL on November 24th and available as CD, double vinyl and digital download.

Their new album, “Forsaken One”, is out now via Sleaszy Rider Records. You can watch the video below: