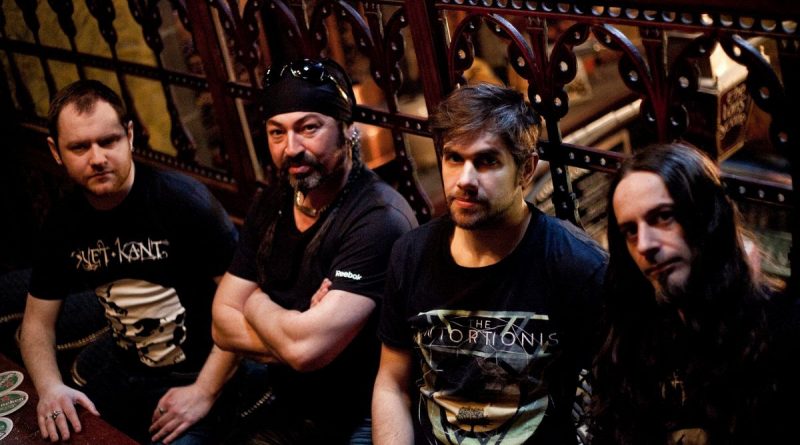 Dublin’s experimental metal combo Svet Kant are thrilled to present their new official video for the track “Sea of Planets”. “Sea of Planets” is a track taken from “The Visage Unbiased”, due for release on 31/05/2019. The album can be already pre-ordered.

The song, as well as the rest of the album, was composed by Santiago Kodela.  Santiago Kodela holds a bachelors degree in music performance specialized in Classical guitar and decided it would be a good opportunity to present a different aspect of the band to the audience.  For this piece, Santiago contacted Rebecca Rodgers, a good friend of him and colleague at the Institution where he studied classical music and composition (Royal Irish Academy of Music).  The piece was inspired by Opeth’s “Coil”.  Even though the aforementioned track doesn’t combine male and female vocals singing together in harmonies, for “Sea of Planets”, Santiago wanted to experiment with the idea of intertwining melodies carried by both singers.  These melodies work independently, sometimes fusing together, and sometimes working in opposition.

The song speaks about how will we depart onto the next world.  Will we leave being a legacy of bitterness and sourness? or will we let go of all our resentment and material possessions and do what’s right both for us and for the world we leave behind? It is a song that talks about facing the inevitability of death in the best way possible, bringing only positive thoughts and memories while leaving behind everything that troubles our minds.

The track wraps-up the record and aims to close the crazy, experimental journey in a meditative and reflective state of mind.  Almost like a much-sought rest after going back and forth onto the realms of chaos and unpredictability.

The song was supervised and coached by Judith Mokk, an international coaching legend who has taught the likes of Mick Jagger, Tom Yorke, Eddie Vedder, and many more international stars.

Taking off towards the stars from the small town of Kimberly, Canada, PHAETON is bringing a new kind of instrumental spacey prog metal to listeners across the galaxy. They have been toiling away on their debut self-titled album, which will be released this past December. In support of the debut album, they have released a guitar and bass playthrough for ‘March of the Synthetics’, a six and a half minute sojourn through delicate prog riffs and heavy pronounced bass work.

They quote that they anticipated taking their listeners “through space and time and feel a complete visceral release that can only be found through prog metal”.

Fans looking for something fresh and relaxing that is reminiscent of Rush, Dream Theater, and King Crimson should check out ‘March of The Synthetics’ below:

VICTIMS comments: “We’re really happy to release our new record through Relapse, a label we have great respect for. It feels like the perfect partnership for us, especially with this new record, which we feel is our most expansive yet in terms of sound and concept. We’re very much looking forward to releasing this latest chapter in the band’s history”.

Additionally, VICTIMS have announced Fall European headlining tour dates beginning October 25 and ending on November 2. The band will also celebrate the release of The Horse and Sparrow Theory with a record release weekend June 28-30 in Poland and Germany. All confirmed tour dates are available below.

The Horse and Sparrow Theory is due out June 28 on CD/LP/Digital. Physical packages are available for pre-order via Relapse.com HERE. Digital Downloads / Streaming Services are available HERE.