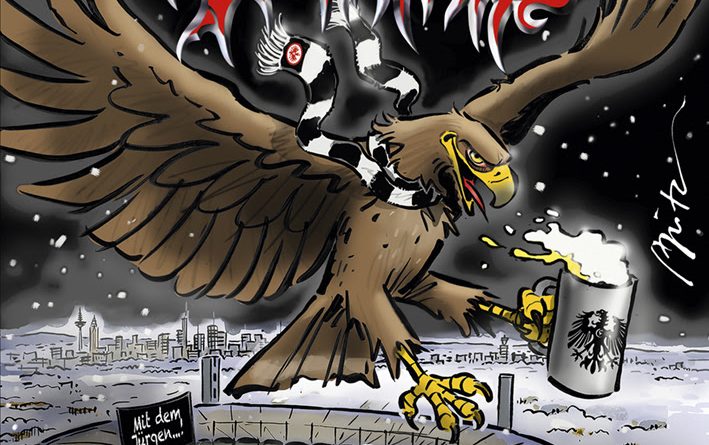 German thrash metal legends TANKARD have released an official video clip for their song ‘Schwarz-weiß wie Schnee’, taken from the identically named EP, which was re-released in 2017 via Nuclear Blast.Impressively, the track has been performed three times by the band before the German football cup final (2006, 2017 & 2018) in which their hometown team Eintracht Frankfurt participated. Check out the video here:

The video was produced by Ralf Holl (Soccer Records) and filmed by Doug Laurent.

‘Schwarz-weiß wie Schnee’ is the anthem of the German football club Eintrach Frankfurt and has been played in the stadium for ten years before every home game. The song has now been completely re-recorded by the band. The thrashers were supported by Henni Nachtsheim (BADESALZ), Ande Werner(MUNDSTUHL) and Roy Hammer (ROY HAMMER & DIE PRALINÉES), who can be heard in the backing choir. The artwork was designed by cult comic artist Michael Apitz, whose comics have been published for years in the stadium newspaper of Eintracht Frankfurt.

You can order the EP here: www.nuclearblast.de/tankard

TANKARD released their highly praised 17th studio album »One Foot In The Grave« in June 2017 viaNuclear Blast Records. With the enormous support of their loyal fan base, the band entered the German album charts at #26, which marks the highest entry in the band’s career.

The official video for GLORYFUL‘s new single “Brothers In Arms” is here! Check it out below:

The song is taken from the band’s upcoming album “Cult Of Sedna”, which will be released on January 18, 2019 via Massacre Records. The album will be available as CD, limited vinyl LP, stream & download, and is available for pre-order on https://lnk.to/cultofsedna. The upcoming album is full of neck-breakers – some of them with a bit of thrash – as well as rock anthems. On “Cult Of Sedna”, mixed and mastered by Jörg Uken at soundlodge, GLORYFUL unite all their trademarks and up the ante with an even heavier sound! Axel Hermann was recruited to take care of the album’s artwork.

The band recently announced that they’re going on tour with Brainstorm in January/February 2019, and released their first single “The Hunt” – which is available in its entirety on https://youtu.be/0ZyzkanO9Rs as well as on various streaming platforms.

And in case you missed it: GLORYFUL were also confirmed to play at the 2019 edition of the Wacken Open Air!

The start of 2019 slams: On January 18th DUST BOLT fire a real thrash-bomb with their fourth longplayer Trapped In Chaos.  Now the raging quartet releases their second video off the upcoming record!

Lenny states:
“Bloody rain is a really special and outstanding song on the new album and in the history of Dust Bolt. It is by far the most melodic song vocalwise, though it´s also a really dark and heavy banger – especially towards the ending. The song was written by our guitarist Flo D. .  I remember him calling me multiple times as he had this song he needed to show me immediately on a rainy and pale day. Mentally it was a dark and uncertain time for both of us, which probably made the song, what is is now. Uncomprehendingly, in some ways “grungy”, heavy and as nihilistic as it can get.”