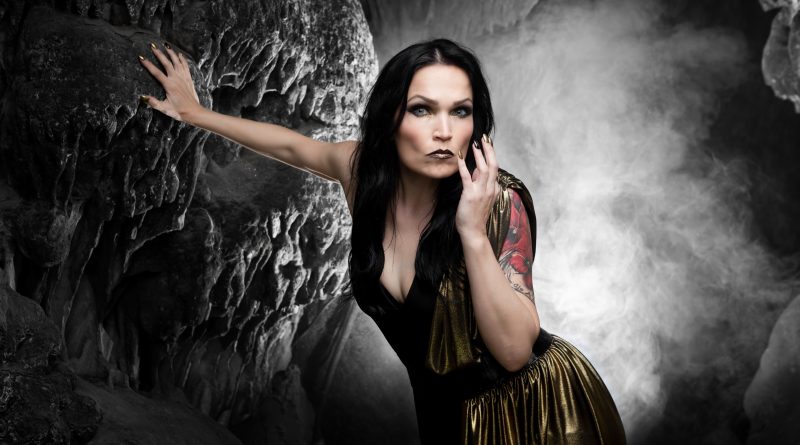 As the saying goes, not all that glitters is gold. But then again, not all that is gold necessarily glitters. It was this idea that struck Finnish singer Tarja Turunen as she began work on her seventh solo album, “In The Raw”.

“Gold, we think, is something polished and perfect, sophisticated, a luxury – but in its natural state it’s a raw element”, explains Tarja. Just like the music on her upcoming album: a combination of sophisticated and refined orchestration, choir and her classically trained voice with a raw, dark heavy musical core. Simply put, “In The Raw” is a gold-plated work of wonder.

Three years on from her last album, 2016’s “The Shadow Self”, “In The Raw” finds Tarja and her beautiful voice sounding, as ever, truly stunning. Working with many of the same musicians and production team as before, the intention was to bring out the idea of rawness to match the feelings Tarja was having from the very beginning of the process.

The album finds Tarja going to raw, personal places in her lyrics. Opening herself up more than ever before, she says she was left feeling naked by her honesty, but also pleased at where she had gone with her words.

The first look at the album, the brand-new song “Dead Promises”, is all this and more. Matching the stunning power of Tarja’s voice with a thunderous guitar, the aggression she speaks of is brought to the front, not threatening to shatter something fragile, but reinforcing its power. “I really like how the guitar sounds: in your face,” she says. “If I’m singing powerfully, I need something powerful behind me so that I don’t feel like I am left alone.”

Fans will find that the album includes a different version of the song with guest vocals by Björn “Speed” Strid of Soilwork.

Reveal, the international Tino Hevia´s band from Spain (Darksun and Nörthwind) and the famous  Swedish Youtuber Rob Lundgren, signed with WormHoleDeath a deal for theworldwide release of their best album “Overlord” .  “Overlord” will be out on 24/05/2019 via Wormholedeath/The Orchard/Wormholedeath USA.

We are proud to work with our new family and show you our best work. “Overlord” has been recorded between 3 countries (Spain, Sweden and Germany), mixed and mastered By Marcos Rodríguez from the legendary metal band Rage, it features very special guests like Derek Sheridan (Songs of Apollo, ex- Dream Theater), Chen Balbus (from Orphaned Land & The Secret Saints) and Marcos Rodríguez from Rage.
Deluxe cover artwork by Felipe Machado (Blind Guardian, Iced Earth and many others). Is Time To Reveal.  #istimetoreveal”

Reveal is a new band put together by Tino Hevia,one of the founders and composers of Darksun and Nörthwind. For Reveal, Tino recruited acclaimed Swedish singer Rob Lundgren, a well-known Youtube presence with more than 139,000 followers and over 500,000 new views of his videos every month. Reveal’s debut album also featurescollaborations with musicians from leading metal acts, including: Marcus Siepen of Blind Guardian, Marcos Rodriguez of Rage, and Tom Nauman of Primal Fear. Reveal’s recording and touring lineup is completed by well-known Spanish musicians with extensive experience in the studio and live arena: David Figuer, Dani Cabal, Jorge Ruiz, and Helena Pinto. Tino recorded two albums with Nörthwind, and has eight albums with Darksun. Throughout his career with these two bands he has shared the stage with Rage, Savatage, Sinergy, Bruce Dickinson, Angra, Motorhead, and many others.

Prysma is a progressive rock band from Thessaloniki. The band was formed in 2014 and after some changes in the lineup and style of their music, they stabilized their sound. Inspired by the progrock scene of the 70s and the most modern evolution of the genre, they try to distil the different musical influences and instincts of each member towards building a more general character, which is also the characteristic style of their music. Some bands that influence the band’s current sound are Pink Floyd, Porcupine Tree, Opeth, Camel, etc. The catalytic factor, of course, was played primarily by the influences of its members, as they formed their “musical perception”. Bands such as The Doors, Rory Gallagher, Nick Cave, Nirvana, Metallica and many more legends of the broader blues, rock and metal scene.
The first album of Prysma was released on March 15, 2019 under the title “Closer to Utopia”. The recording was performed live, without the use of a metronome and with little overdubs, achieving the live and vintage aesthetics they wanted to impart to the contents of the disc. The duration of the recording was 3 days and the space was nVelopeStudios.

In this album is included the song “Lost in the sky”, which video you can see below: