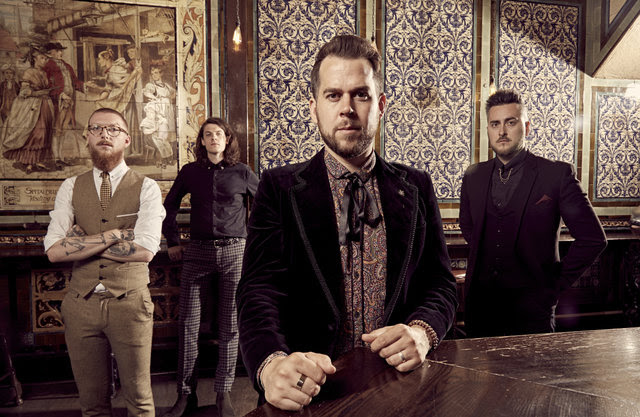 Nuclear Blast Entertainment are pleased to announce the release of the new single from TAX THE HEAT, ‘Money In The Bank’, on the 8th November, 2017. The single is the first track to be taken from the band’s forthcoming second studio album, due for release in 2018.

‘Money In The Bank’ highlights the band’s unique blend of blues driven rock with a modern alternative twist that has won them a legion of fans. The driving rhythms of Jack Taylor (drums) and Antonio Angotti (bass) are overlaid with the powerful riffs of JP Jacyshyn (guitars) and distinctive melodies of Alex Veale (vocals, guitars).

“We are extremely excited to unveil the first single from our new album. ‘Money In The Bank’ combines key elements of what we do best: big riffs, big choruses and filthy guitars. We believe that an album should be seen as a snapshot in time of an artist or band, this album has captured us at a particularly exciting moment. On Nov 8th we hit the road with BLACK STAR RIDERS and will be playing some material from our forthcoming album.” – Alex Veale

Italian symphonic death metal quartet Genus Ordinis Dei have just unveiled a stunning new music video for their latest single ‘Cold Water’. The impressive music video was directed by Steve Saints, and filmed in the dangerous Italian Alps (aka Dolomites) in Trentino, Italy. The band and crew spent a total of three days & two nights trekking across the snow-covered mountains at altitudes exceeding 7,300 feet above sea level, filming at both Pordoi Pass and Sella Pass.

The song was written about an expedition gone wrong, and the rescue squad that was sent to find the missing explorers. They eventually find the cave where the survivor lies, but is it too late? Watch ‘Cold Water’ now below:

‘Cold Water’ is the second single taken from their upcoming sophomore full-length album entitled Great Olden Dynasty which will be released on November 24, 2017 via Eclipse Records. The album features ten pummeling tracks of symphonic death-metal mastery, including Cristina Scabbia (Lacuna Coil) on guest vocals for the song ‘Salem’. The album was produced, mixed, and mastered by Simone Mularoni (Luca Turilli’s Rhapsody, DGM) at Domination Studio.

“I have never walked so much in my entire life!” states drummer Richard Meiz.“I’m not a sportsman, so it was challenging to do all that climbing with as much as 1 meter of snow under my feet, but we have seen places that some people will never see. I feel very lucky about that!” Guitarist Tommy Mastermindelaborates, “The next video MUST be about beaches and sun! We suffered intense cold, snow, and traversed several treacherous trails. We were tired as hell and had to walk with no real sense of direction because the snow had covered the paths. At times, we didn’t know if we were about to fall from a cliff or not, but we’re lucky enough to have come back without injury! The vistas were amazing and fortunately the weather cooperated, otherwise this could have ended up being a real story. I don’t think any of us will ever forget this, and it was totally worth it!”

Luxembourg’s Extreme Progressive Metal six piece Mindpatrol have just released a new video clip for “Her Dire Sacrifice”, taken from their upcoming album “Vulture City”, which will be released on December 9th. “Vulture City” is a concept album, accompanied by a German tie-in novel written by vocalist Luc François, telling the story of an orphaned pair of siblings, living in a dystopian future. In this highly conceptual work, Mindpatrol are painting a world, in which humanity is on the brink of extinction and has to ask itself what’s more important: free will or a safe place to live. The band wishes to invite their listeners to join the journey of these two siblings as they search for a better place in a city that seemingly holds nothing but pain for its inhabitants.
“Vulture City” was produced by Sebastian Levermann (Orden Ogan) at the Greenman Studios, and the video was directed by Benedikt Dresen (Upstart Media).
www.mindpatrol.net
www.facebook.com/mindpatrolband
www.youtube.com/mindpatrolband
www.instagram.com/mindpatrolband
www.twitter.com/mindpatrolband