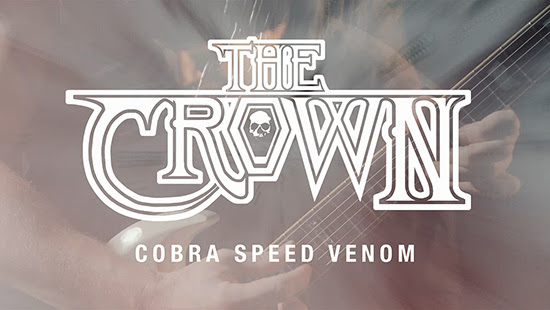 Swedish Death Metal legends THE CROWN will release their new album ‘Cobra Speed Venom‘March 16th via Metal Blade Records. Produced together with Fredrik Nordström at Studio Fredman the record promises to be one of the biggest surprises of the year. A return to Death Metal speed and darkness in full glory! THE CROWN have now released the 2nd single taken off ‘Cobra Speed Venom‘. Click the following link to watch the full production videoclip for the title track ‘Cobra Speed Venom’:

“A 5 minute Death Metal Grindcore Opera! Take a deep breath before the plunge – This will drag you down into the deep Waters!”

Comments THE CROWN on their new album ‘Cobra Speed Venom‘: “We are really looking forward to finally be able to show our fans how damn good this band can be when the circumstances are right. With that I mean to be able to do an album the way we want to do it: creating as a band, rehearsing as a band, recording as a band. You will hear a band performing here, with fierce energy and hunger!”

Surf over to metalblade.com/thecrown to check out the video for the first single ‘Iron Crown’. At the same location you can pre-order the album in the following formats:

Chuck Norris never falls, he just attacks the ground! He makes onions cry, he can sit while standing, piss his name into concrete and drown fish. Chuck Norris does not celebrate his birthday either, his birthday celebrates him – as does guitar kamikaze Jen Majura, who pays homage to the action movie legend in her new ENGL playthrough clip “Like Chuck Norris.”

The song is taken from her newly released solo album InZENity (available world-wide now) and delivers a sweet 80s Hard Rock tune, armed with a catchy chorus that would even make Mr. Norris smile. Perfect earcandy for the party that waits around the corner! But beware, Chuck Norris likes to throw parties – 200 meters!

InZENity is in stores now and available to download and stream!