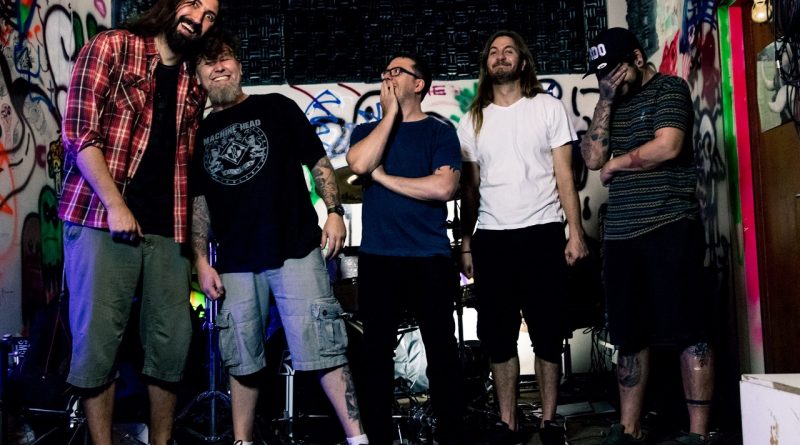 After storming on to the scene in 2014, the release of 2 critically albums and short break, Johannesburg based sludge metal miscreants The Drift are back with a new line-up, video and forthcoming album. Seer is the title track taken from the new album which is set for release in September.

“After a 2-year hiatus, this was the first track written when the pieces came back together. It was a fresh finish to an album that was mostly done, truly giving it a raw and unbiased musical perspective, so much so that it was chosen as the title track that kicks off the Deluge trilogy.” – Vocalist Louis Du Pisani

Comprised of seasoned old salts from various corners of the South African scene, having performed with Lamb of God during their South African tour in January 2014, as well as playing with international bands Unearth, Protest the Hero, Wolfmother, Affiance and a national tour with Dreamshade. In 2015 the band played Witchfest alongside Cannibal Corpse, Hatebreed, Epica, Decapitated, Kataklysm, Belphegor and many more. The Drift was also chosen as the sole support act for the At the Gates event in Johannesburg.

Things got complicated after the release of the second album The Mountain Star in 2015, with work and family commitments the band had to become more fluid to survive. Guitarist Stefan Stabic had to leave; Alec Surridge stepped in. As a result, the band crafted their own corner in the Johannesburg music scene by opting for a more DIY approach. The result was a series of packed out shows which evolved into packed annual music festivals.

The band has completed the recording of their 3rd album SEER, the last piece of the Deluge trilogy.

“These guys are at the forefront of the growing South African heavy music scene and are poised to spread their groove laden metal throughout the World!” – Trevor Phipps (Unearth)

Danish black metal band ORM recently announced the release of their long awaited second album ‘Ir’ (‘verdigris’) containing two long compositions which will see the light of day on August 30th. Now, the band releases the first album excerpt of five minutes from the record’s side A in a filmed live version, and the album’s physical formats are now also available for pre-order.

ORM’s second album ‘Ir’ is an ambitious progressive black metal work consisting of the two compositions ‘Klippens Lyse Hal’ (‘The Bright Hall Of the Cliff’) and ‘Bær Solen Ud’ (‘Carry Out the Sun’) which clocks in at 23 and 24 minutes respectively. The band’s guitarist and singer Simon Sonne Andersen has produced the album and the band has also designed the record’s visual side themselves. Recently, ORM released the first sounds from ‘Ir’ in an album trailer, but now the band unleashes the first genuine excerpt from the album in the shape of five minutes from the record’s side A ‘Klippens Lyse Hal’. The excerpt is not sound directly from the album though but instead it comes from a recent live session in the Copenhagen based studio Black Tornado, produced by the band itself and filmed by filmmakers Bjørn Patterson and Anders Dahl.

ORM (Danish for ‘serpent’) assumed form in 2015 and in 2017, the band released its first and eponymous album which arose with its mythical tales of man and nature accompanied by a grandiose, melodic yet raw and direct black metal. The next chapter of ORM’s history is ‘Ir’. On ‘Ir’, the contrasts are bigger, the complex is more complex, the simple more simple and the melodies are poignant and contagious. The form is elongated, dynamic and adventurous, and the musical ambition and performance bears witness to an ensemble void of compromise and led solely by its own flame – where ever it may lead to. The album’s narration revolves around the impermanence of all things and is a personal reflection on how this aspect is contained within the human drama, religion and nature.

‘Ir’ will be released on vinyl, cassette and digital formats on August 30th 2019 through Indisciplinarian. The vinyl version comes in 400 black copies and 100 white copies, both with a beautiful gatefold with a booklet, and the cassette version comes in 150 white copies in a slipcase. Both physical versions of the album are now available for pre-ordering via Indisciplinarian webshop HERE.

Vulvodynia unveils the video for their track Famine

Vocalist Duncan Bentley explains, “Poverty brings forth our darkest perversions, a starving belly leads to a starving mind.” These are the opening lyrics to ‘Famine’, a song that focuses on all the poverty in South Africa and around the world. These are the horrific things unfortunate people will resort to in order to survive.”

“We had an amazing time with Fred “The Image Engineer” shooting this video! We hope our fans think as cool as we do! It’s all about the poverty we have back home in South Africa and the desperate horrific measures people go to for money” – adds guitarist Kris Xenopoulos

Watch the video below

Mob Justice released on the 30th June 2019 on Lacerated Enemy Records and all digital platforms.
Order the album here