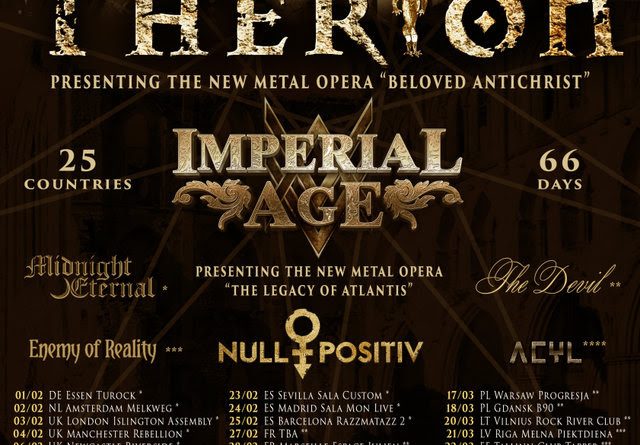 Symphonic metal pioneers THERION unveiled the plot and first track off their opulent opera project »Beloved Antichrist« last year, which will see the light of day on February 9th. Today the band is kicking off the new year by presenting another digital single, ‘Night Reborn’. This uptempo track from the opera’s second act melds typical THERION metal riffs with symphonic grandeur and gives fans another taste of the three-hour-long drama composed by band leader Christofer Johnsson.
Watch the lyric video here:

n February 9th, Salt Lake City’s traditional metal champions VISIGOTH will release their sophomore album, ‘Conqueror’s Oath‘, via Metal Blade Records. Today, the band unleash a new video on the world for the lead single “Warrior Queen.” The video was directed by Brock Gorssl (vortexvideos.com) and can be seen now below:

At metalblade.com/visigoth the record is there ready to pre-order and available in the following formats: 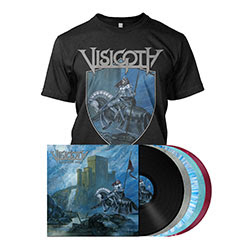 Standing in staunch opposition to any presumptuous notion of “reinventing the wheel” or “redefining the genre”, VISIGOTH instead dedicates themselves to worshipping at the ageless altars of heavy metal with a singular focus on writing music inspired by their favorite records. Whether whipped into a frenzy ignited by classic USPM or NWOBHM anthems, or pensively meditating on traditional epic heavy metal or weighty doom-inspired moments, these Salt City hessians wear their influences proudly on their sleeves. With their new 2018 long-player ‘Conqueror’s Oath‘, VISIGOTH stays true to the title and conquers the sophomore slump blues with 8 iron-forged anthems of pure metal magick guaranteed to satiate the hunger of the rock’n’roll hordes! Returning to the depths of the Boar’s Nest in their hometown of Salt Lake City to record once again with engineer extraordinaire Andy Patterson (Subrosa, Deathblow,Dreadnought, et al), ‘Conqueror’s Oath‘ was hammerforged in a whirlwind month of mayhem and mastered by Dave Otero of Flatline Audio (Satan’s Host, Nightbringer, Khemmis, et al). Immortalized by breathtaking cover art created by none other than underground album art legend Kris Verwimp (whose work has graced records by Absu, Bewitched, Desaster, Horna,Moonsorrow, Skullview, Arkona, and many, many more) in proper swords-and-sorcery fashion,Conqueror’s Oath stands tall on the field of battle, serving as a gauntleted fist in the face of non-believers. Prepare for the onslaught of Salt City Steel!

PHILIP H. ANSELMO & THE ILLEGALS are premiering the third crushing song taken from the legendary singer’s sophomore album with his personal band, ‘Choosing Mental Illness As A Virtue’. The full-length will be out on January 26th, 2018. “Delinquent” is now streaming below: