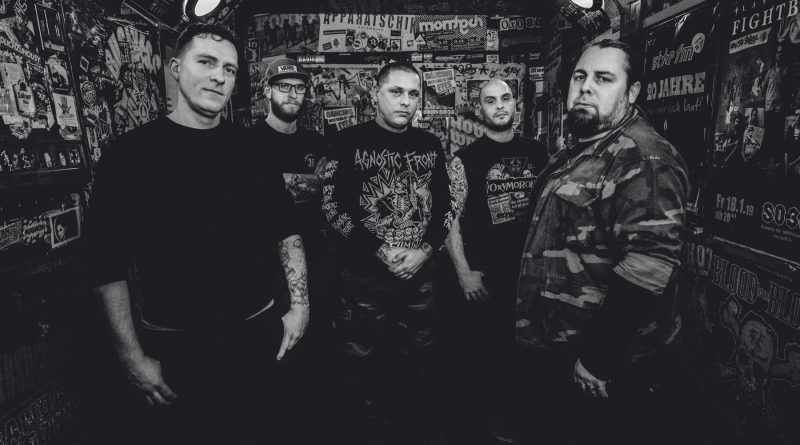 German streetcore legends TOXPACK from Berlin return with their ninth full length album Kämpfer on May 31st! After entering the Top 20 of the official German album charts with their last two releases (Schall & Rausch #20 and Friss! #16),TOXPACK continues their journey to the top with the impressive, honest and strong new album Kämpfer.

Now the fifth piece from Berlin release the title track and video „Kämpfer“ (German for “Fighter”).

TOXPACK on the new album:

“On May 31st 2019 our ninth studio album Kämpfer will be released via Napalm Records! With 16 songs + Bonus Track at about 54 minutes play time it is the longest album in our 18 year history. We are proud that Kämpfer is produced by Florian Nowak and Marc Wüstenhagen (Dailyhero Recordings) again, who also recorded our last full length Schall & Rausch. Our main focus is once again on catchy harmonies and melodies, which will stick in your head. The songs are about freedom, courage, daily fights, hope, love, anger, sorrow, desire and our strong friendship. We are sure that you will regain yourself in our lyrics!

“Kämpfer” is an album for everyone that is living in daily fights. For everyone that stays strong and never bends down, never surrenders and always keeps on fighting for their dreams and to reach their goals in life!”

Furthermore TOXPACK and Napalm Records produced a documentation a on the eventful history of the band – watch HERE for stories about first rehearsal rooms, bar fights, and shows in front of 20.000 people

A unique and powerful live band, Western Australia’s Tempest Rising, hit the road as often as they can. Since 2012, they have toured anywhere and everywhere – from gleaming capital cities to dusty outback towns – forging themselves as one of the most distinctive and engaging metal bands in the country. Kicking off 2019 with a bang, they have emerged from the studio with a ferocious new album, also having just returned from their first European tour. Following on from 2014’s Transmutation, Alter Ego finds Tempest Rising heavier, groovier and more musically ambitious than ever.

Shifting from soaring melody to sheer brutality in a heartbeat, Alter Ego displays a jaw-dropping fluency in heavy music. A vortex of drums, bass, guitar and vocals, each track is a blistering showcase of the band’s talented line-up of seasoned, accomplished musicians. Together, Tempest Rising flawlessly tread the tightrope between heaviness and technicality, drawing from the history of metal while carving out the shape of things to come.

Engineered and mixed by Chaos Divine’s Simon Mitchell, Alter Ego is an absolute pinnacle of songwriting, performance and production. A perfect case in point, the album’s first taster Breathe and new single Ghosts is everything at once: complexly rich in crushing power and virtuosity, yet somehow immovably simple and uplifting.

More than anything else though, Tempest Rising are a live band. Honest and unpretentious, they are the kind of people who are found sharing a beer and a laugh with fans after every show. In any country, in any language, metal evokes the most passionate, loyal followers, and Tempest Rising want to meet them all. With the release of Alter Ego Tempest Rising have entered an exciting new chapter of their story that will cement them as one of the best emerging heavy bands around.

Like a blackened metallic phoenix rising from the ashes of their previous band Endemise; Ottawa’s SERENE DARK intends to take their extreme metal to new heights. Morphing from Endemise to SERENE DARK, these demons have joined forces with YouTube channel Black Metal Promotion for the premiere of their first single ‘Where Time Drowns Still’ off their forthcoming yet to be titled debut album, which was recorded at Wolf Lake Studios deep in the woods of Quebec. The upcoming album ushers a new era for SERENE DARK as the band worked with longtime producer Mike Bond (Loviatar) and session drummer Eric Morotti (Suffocation) to create a 10 song full length that plans to unleash a blistering force of evil. ‘Where Time Drowns Still’ lyrics deals with pain and loss, a theme that will be seen throughout the record.

“‘Where Time Drowns Still’ is one of our darkest songs to date and is a perfect representation of Serene Dark and the album we have nearly finished.”

Listen to ‘Where Time Drowns Still’ below: