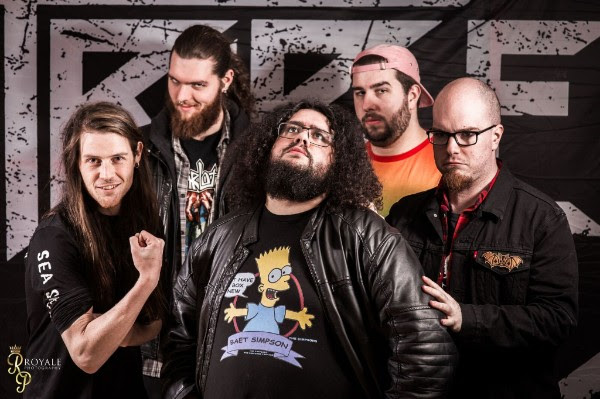 Melbourne’s hottest metal band Triple Kill are stoked to unleash their latest film clip and new single “The Alchemist!” This will be the first release from their upcoming album “Age Of Rebellion” and what a way to kick things off! “TheAlchemist” is a brilliant example of what is to come from Triple Kill’s epic new album! It’s heavy, it’s hard hitting, it’s riff filled with brilliantly on point vocals and it’s here now!

Check out “The Alchemist” below:

Melbourne’s Heavy Metal stallions, Triple Kill are known for their incredibly witty and humorous film clips and promotional videos. They’ll make you laugh one minute then have you in awe of their amazing talent and brilliant music the next. They might have a great sense of humor and love to get their fan’s laughing, but they also take their music very seriously. Triple Kill are lifelong best friends with Rodney Goolagong on vocals, Anthony Commane and Daniel Mackie on guitars, Efun White on bass and Connor O’Keane on drums. The band first formed back in 2015 and from the very beginning they have been committed and passionate about the band and their music. After releasing their EP “The First Kill” in July 2017, they are now set to release their debut album “Age Of Rebellion” very soon!

Two weeks to go before the release of this outstanding melodic metal album “Firesign” from Sweden’s hopefuls DYNAZTY and as advance to it we present you here the official lyric video “Firesign”:

Accompanied by a lyric video, it is the first time fans are able to hear a Stratovarius classic in orchestral style. With the album version being one of most streamed songs in the band’s history, the inventive orchestral version highlights the band’s talent for epic melodies and fine harmonies. Below you can see the lyric video:

Pre-orders of the album, with the song as an instant grat track, are available now:
► https://stratovarius.lnk.to/EnigmaIntermissionII

“ENIGMA: Intermission 2” features three brand new songs as well as, for the first time in the band’s history, four beautifully arranged orchestral versions of popular Stratovarius songs. The
album is similar in concept to “Intermission”, released 17 years ago between “Infinite” and “Elements”, in the sense that these seven tracks made in 2018 are completed by nine very rare,
very hard to find power metal gems. With over 30 minutes of brand new material and 50 minutes of previously rare metal, “ENIGMA: Intermission 2” is definitely a killer release filler!
The album is going to be released on September 28 th , 2018 as CD Digipak and Digital on earMUSIC.