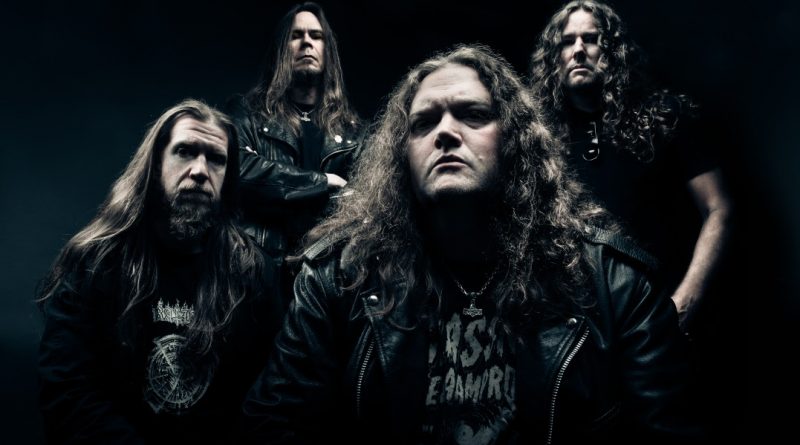 Here comes the second strike of UNLEASHED’s new album. It’s the title track of The Hunt for White Christ, which will be out on October 26th via Napalm Records!
Singer and bass player Johnny Hedlund explains the story behind the new song:
“After the despicable acts of terror against women and children in the South, and the devastation of the villages (as seen on the album cover), The Midgard Warriors decide to hunt down White Christ, all the way to Jorsala if need be.”
When it comes to Swedish Death Metal, the traditional Stockholm way and death metal per se, there is one band you have to mention: UNLEASHED! Formed in 1989 by vocalist / bass player Johnny Hedlund, UNLEASHED have been delivering supreme death metal from day one. Dealing with Viking traditions and values, and honing their craft, they have become extreme metal pioneers, musically and lyrically, inspiring legions of other bands with their sound.
“The Hunt for White Christ” is the fourth album in the continued story line of the World of Odalheim and their Midgard warriors – a story authored by Johnny Hedlund himself, comprising of the past, present, and what Hedlund’s deems as the future of the Viking traditions and values. The album was recorded in the spring of 2018 at Chrome Studios, and does not simply mark the Swedes` 13th full-length album: it also solidifies the bands impact on history, paving the way to their 30th anniversary in 2019! Three decades of metal onslaught, and they have neither lost their bite, nor their love for pure death metal mayhem!
Pre-Order The Hunt for White Christ HERE!

Moonshade long anticipated debut album “Sun Dehtroned” gives birth to the second single, “Eventide”. 26th October it’s the day you are all waiting for but until then listen to “Eventide” below:

“MOORE BLUES FOR GARY – A TRIBUTE TO GARY MOORE”

The sky was crying when Gary Moore passed away on 6th February 2011.  From Thin Lizzy to Colosseum II, together with his solo hits ‘Parisienne Walkways’ and ‘Out In The Fields’, Gary influenced a whole generation of guitar players and guitar playing.

The bass player/producer Bob Daisley had played with Gary since the 1980’s, and is known for suggesting to Gary that he should make a blues album – the rest is history, ‘Still Got The Blues’ was an immense hit, followed by a series of classic modern blues albums. Bob, also known for his contributions to Rainbow and Ozzy Osbourne, was the driving force behind “Moore Blues For Gary”.

“In my opinion, Gary was one of the best guitarists who ever lived”, says Bob Daisley. “It was an honour for me to have worked with him and to have known him so well. When Gary passed away in 2011 the world lost one of the all-time greats. I don’t think that enough was said or done at the time to acknowledge the loss of such a great player so I took it upon myself to pay personal tribute to the man and record some new versions of his music, mostly from his blues catalogue.

I asked many members of the Gary Moore family tree, and some other great players, to contribute to the project. The response was not only encouraging, but very moving. It seems that the name Gary Moore is also synonymous with the words ‘respect’, ‘honour’ and ‘greatness’. I didn’t set out to recreate anything that Gary had done, or to compete in any way, these arrangements and performances represent a ‘hats off’ to Gary and nothing more. Long live the memory of Robert William Gary Moore. Yes, he was an­other ‘Bob’ – something that I wasn’t aware of for all of those years that I worked with him. I feel such gratitude towards the people who contributed to this album and I’m honoured to have worked with them all.”