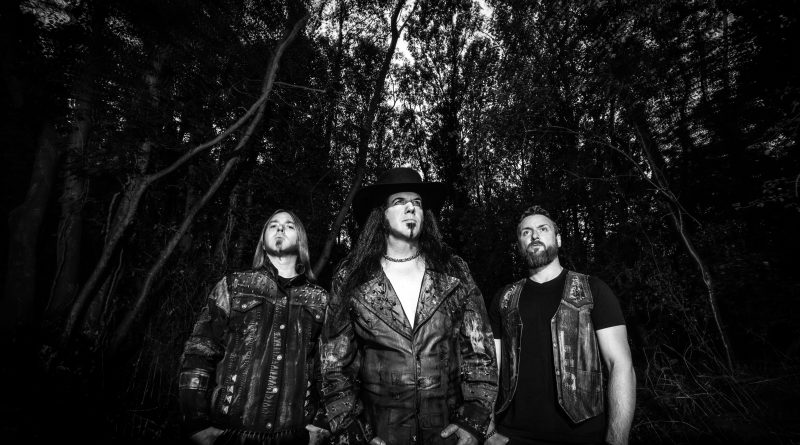 Rune Blasphemer Eriksen comments on the track: “In my personal opinion, any one of the songs on ‘Something Wicked Marches In’ could be a potential single. We ended up choosing ‘Praevalidus’ as the first one, mostly due to its immediacy and intensity but also as it feels like a suitable way of showcasing what this band and this album is all about. Let the celebration of the wicked commence!”

The first track of the death metal energy can be found below:

VLTIMAS have furthermore revealed the cover of ‘Something Wicked Marches In’ which has been created by renowned Polish artist Zbigniew M. Bielak (GHOST, PARADISE LOST, BÖLZER, ZHRINE) and can be viewed together with the track-list below.

Pre-orders will be available in January 2019

Deathcore merchants CARNIFEX have released a brand new EP today entitled »Bury Me In Blasphemy«. The EP was mixed by Jason Suecof (DEATH ANGEL, CHELSEA GRIN, JOB FOR A COWBOY) and artwork was created by Zack Dunn. Check out the music video for the title track, here:

Fans can now stream the release on all fine streaming platforms. It is available to purchase physically as a limited cassette and digitally from the following location: http://geni.us/CarnifexBMIB.

CARNIFEX began carving out that bond with the audience way back in 2005. Over the course of four albums –»Dead In My Arms«, »The Diseased And The Poisoned«, »Hell Chose Me«, and »Until I Feel Nothing« – the band attracted a diehard following. Engaging a hiatus in 2012, they returned a year later with a vicious and vigorous vitality. It’s only grown since and is on full display in »Slow Death«.

WINDSWEPT, the Ukrainian black metal formation founded by DRUDKH mastermind Roman Sayenko, are premiering a new track. The song “Stargazer” is taken from the upcoming album ‘The Onlooker’, which will be released via Season of Mist Underground Activists on February 8, 2019. The song can be heard below:

Conceived by DRUDKH mastermind Roman Sayenko in cooperation with two fellow band members, black metal force WINDSWEPT have returned with their second full length. ‘The Onlooker’ is to be released via Season of Mist Underground Activists on February 8, 2019.

Sayenko’s latest brainchild, WINDSWEPT, came into being in 2017. As this project stays within the classic expression of Ukrainian black metal, the band shares some similarities with legendary DRUDKH. However, the main goal for the three musicians is to express their creative ideas by improvising and capturing these sounds with the raw and authentic feeling of a live performance.

WINDSWEPT released their full length debut ‘The Great Cold Steppe‘, last year (March 2017). A musical piece that was inspired by the cold and harsh realities of the hostile and fierce Eastern steppes. Reflecting upon notions of traditions and the past, the musicians released the EP ‘Visionaire’ on Van Records, early in 2018.

Built on the same foundations, the new record ‘The Onlooker’ once more employs a raw, fierce black metal sound reminiscent of earlier days, harvested from spending only a few of days in the studio. ‘The Onlooker’ is bound to appeal to those who’ve enjoyed other works of these veterans of Ukrainian (black) metal scene.