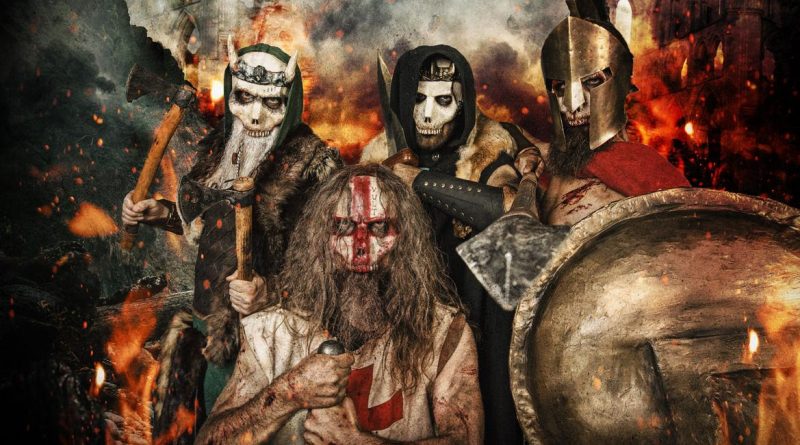 WARKINGS Warriors! The week of truth arrived! The time has come to unveil Odin’s full word.

300 Spartans against the Empire – this heroic fight can’t be forgotten and so Odin sent The Spartan as one of the four Kings Of War back to planet earth. This brave king was one of the few who stood side by side to hold the place of doom when the superiority of the Empire tried to fight them back, armed by not much more than their iron will. Spartans are men of few words. They prefer to go straight to action. So The Spartan summoned two attendants: From the seventh circle of hell, the Queen Of The Damned arises to lend her voice to the WARKINGS! Hear (and watch) her in the video below. For the album Reborn that appears next Friday, Odin sent another of his disciples for the song. Stay tuned!

Queen Of The Damned:
“I’ve come a long way to meet the kings again. Now listen to the sound of our voices dancing with the screams of our weapons.”

Myrkur is Amalie Bruun. For her forthcoming Juniper EP, she’s joined forces with Jaime Gomez Arellano (Ghost, Paradise Lost, Solstafir, Cathedral) at Orgone Studios in Bedfordshire, England. The album’s B-Side, “Bonden og Kragen”, is a solo reinterpretation of a traditional Danish folk song from the 1600s. Together, both tracks exquisitely display Myrkur’s eclectic sound and captivating personality. A limited edition of the 7″ will coincide with the digital release, December 7th on Relapse Records. “Juniper” is available now on all streaming services and you can pre-order it here.

SHADYGROVE – Live video of “The Port of Lisbon”

Folk/acoustic band SHADYGROVE has just unleashed a live version of the song “The Port of Lisbon”, taken from their debut album “In the heart of Scarlet Wood”. The video was taken at “Bum Bum Festival” in Bergamo (IT), as opening act for LACUNA COIL and you can watch it below:

Featuring members from Elvenking, Evenoire, and Sound Storm, Italy’s SHADYGROVE journey into our primordial and mythological past for inspiration. Like musical time travelers or aural archaeologists, they have trawled eras beyond most bands’ inspiration to create music from the soul…for the soul!

Theirs is an acoustic heaviness that is truly original and special. It’s as though, like the myths and legends that inspire them, SHADYGROVE have always been with us, in the Celtic Otherworld, just waiting for us to look with our hearts rather than our eyes. SHADYGROVE make music as fresh as tomorrow’s dawn.

“In The Heart of Scarlet Wood” was released via Rockshots Records on April 6th, 2018
➤ smarturl.it/shadygrove