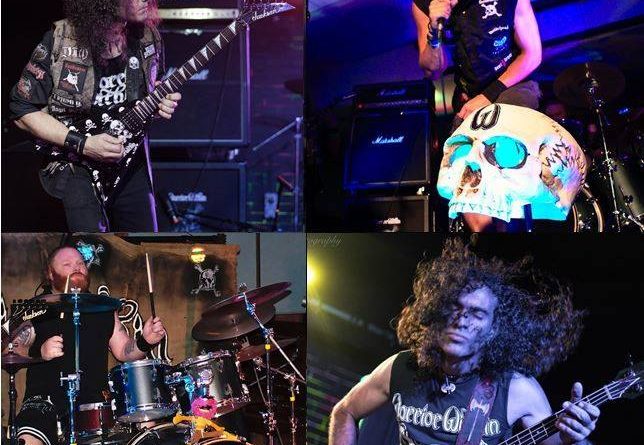 Australian thrash metallers Warrior Within have released the song Opus from their deput EP In Darkness Act 1 as video.

Warrior Within are purveyors of good wholesome thrash metal. They do not stick to one topic lyrically but cover social, political and esoteric themes. The band from the Australian Sunshine Coast was established in the 90s by brothers Tass and Toli. With Scott and Dan joining, the band has been shaped into the current form.

Guitarist Tass states: “We have persevered through all adversity to release our music. To us Heavy Metal is not just entertainment, its a vehicle to explore a better reality.” Fans will have a lot of opportunity to find out what that means. Warrior Within is already working on their second EP. In addition, metalheads living along Australia’s East Coast will have the chance to see the guys live as they plan a tour for early 2020.

Have a listen to In Darkness Act 1 to get a first taste of all that coming.

Warrior Within’s EP In Darkness Act I is now available physically or for download on Bandcamp.

On June 7th, the two highly acclaimed albums “Demons & Wizards” (2000) and “Touched by the Crimson King” (2005) are going to be released physically again.  Now, DEMONS & WIZARDS present a lyric video for the track “Heaven Denies“, taken off the remastered album “Demons & Wizards”, created by Scott Rudd. You can check out the video below:

Streaming & pre-ordering options are available below:

“Touched by the Crimson King”:  https://DemonsWizards.lnk.to/TBTCKRemaster

The band says: “A great opening livesong live that really works to get the audience into headbanging mode! This is one of our faster tracks….heavily NWOBHM influenced! The video is recorded at our hometown for the releaseparty of the ”Dust to Gold” album. Stretch your neck and get ready for the Speed and Attack”