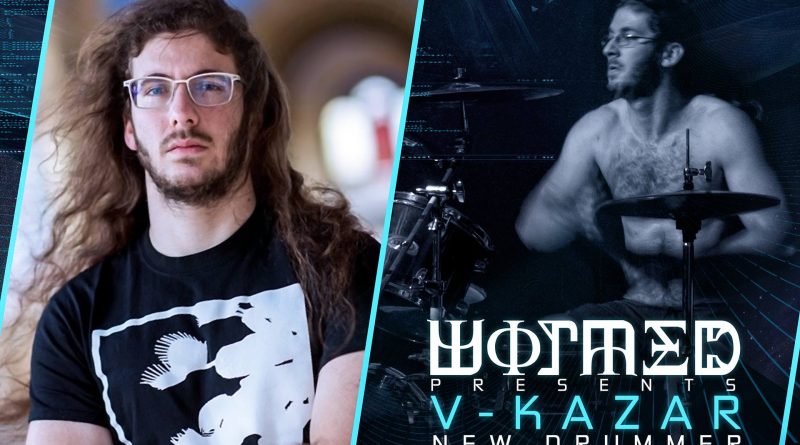 Furthermore, WORMED recently announced that V-Kazar (Gabriel Valcazar) has joined the ranks of the technical death metal formation as their permanent drummer, after the tragic passing of drummer G-Calero.

The band comments: “We want to share some great news with you. We’re very happy to inform you that V-Kazar (Gabriel Valcazar) is joining WORMED as our new drummer! Gabriel is an awesome and talented drummer; just from the first rehearsal we were completely impressed with his amazing skills and technique. For those of you who don’t know, he also does impeccable work drumming in Ernia and Aposento, among other projects. We see him as a promising new talent in the scene! This guy is superb, and we’re really proud of having a good drummer, as well as a great person, join our ranks.”

In V-Kazar’s own words: “It’s extremely humbling to be a part of WORMED after so many years of being a fan of their music. Performing their material is no easy task, but I will do my best to live up to their legacy and Calero’s memory. I can’t wait to share the stage with them! Stay Wormed!”

Montreal progressive death metal four-piece Shape The Above released their debut full-length album entitled At the Hands of Loss on April 13. The group has now launched a music video for the song “Cessation”. Watch it here:

Commented the band: “Rehearsals before Metalhead Meeting Festival and Wacken Open Air this summer, We can’t wait to share our music into new horizons. This is one of many projects we are working on stay tuned.”

As previously announced, PHENOMY won the Metal Battle in Beirut on April 27th, earning so a slot at the Wacken Festival 2018 (August 2nd-4th).

Lebanese metal band PHENOMY was formed by Loïc El Haddad and Rudy Bejjani in 2014. The band’s sound is a mixture of Thrash/Groove metal with Melodies, breakdowns and tribal/ethnic rhythms. Only three month after its formation, PHENOMY performed in several local gigs and in the Persian Metal and Rock Festival in Cannakale/Troya city in Turkey alongside big names like Orphaned Land. Later on, PHENOMY released their debut album “Once And For All” and received good feedbacks from magazines and webzines, before signing a distribution deal with Via Nocturna in 2017. In Summer 2017 PHENOMY toured with Repay the eastern European countries (Hungary, Croatia, Serbia, Romania and Bulgaria). Furthermore the band supported GRAVE in Lebanon in October 2017. The band released their second album “Threaten World Order” on March 2018.