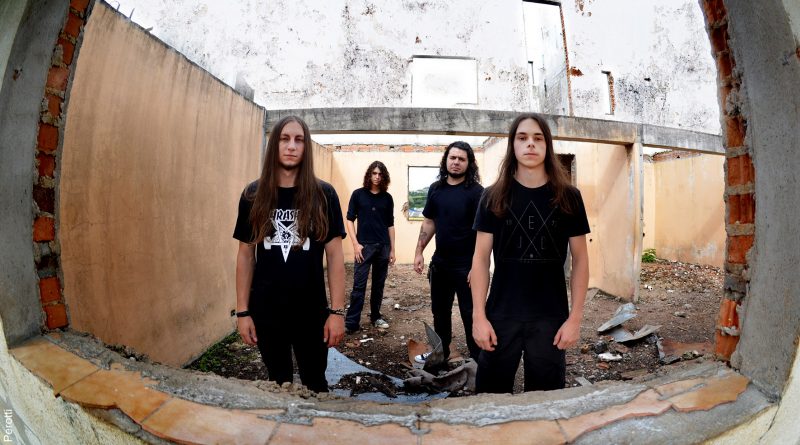 Brazilian thrashers WORSIS have posted a new lyric video for their track “Sisyphus“, which is off their debut album “Blinded By The System” released this past September. Recorded at Black Stork Studio with producer Thiago Caurio (Astafix) with mixing done by Benhur Lima (ex-Hibria) and mastering by Marcel van der Zwam, the 11 track headbanger also includes two moshers in Portuguese. Cover art was created by Hugo Silva, from Abacrombie Ink.
You can watch “Sisyphus” below:
“Blinded By The System” was released independently and is available in physical format directly from the band with worldwide shipping. The digital version is available via:
Spotify: http://open.spotify.com/album/0hYpAaESBGhSOCFHZ2sDvP
Amazon: https://www.amazon.com/Blinded-System-Worsis/dp/B075W48K8K/
Deezer: http://www.deezer.com/br/album/48934662
iTunes: https://itunes.apple.com/br/album/blinded-by-the-system/1289649015

Back in 2008, ALESTORM were mere newcomers and beginners – and yet they created a modern metal classic and a completely new subgenre: Captain Morgan`s Revenge marks the birth of Pirate Metal as we know it today and turned a couple of young Scotsmen into the hottest band the modern metal scene has to offer! Ten years later and sold-out shows all over the world, their boozy debut gets its well-deserved anniversary treatment and will be re-released on January 26th 2018with Napalm Records!

Captain Morgan`s Revenge – 10th Anniversary Edition has received a fresh remix and remastering by original producer Lasse Lammert at his LSD studios and will be coming with a rejuvenated artwork. Alongside the ‘Live At Summer Breeze‘ bonus disc, this re-release will be a true gem for all collectors, new fans and nostalgics alike!

Let’s travel back in time, as the band now released a lyric video for the album title track ‘Captain Morgan’s Revenge‘. Check it out right below:

Says the band:
“Oh wow! What a great song! The title track of our first album Captain Morgan’s Revenge is still a live staple in our set these days, and I’m sure you all know the words to it already, but we made this fun wee video just in case any of you have recently contracted amnesia. As you can hear, our producer Lasse Lammert did a great job improving the mix from the original version we made 10 years ago. Nothing too crazy, just a bit of spit and polish. Enjoy!”

TRIBULATION have revealed the cover artwork for their new album “Down Below”, to be released January 26th, 2018. The hauntingly beautiful painting was done by TRIBULATION’s guitarist Jonathan Hultén.

The first track of the album is also available as of today! Check out the album’s opening track “The Lament” in a video directed by Robert Piel here:

TRIBULATION comment as follows: “We always plant strange seeds, seeds that when fully grown and ripened have taken their own often unexpected twists and turns. When working with this video we got to share that process with someone else who is also planting strange seeds. Director and producer Robert Piel approached us and wanted to make a collaboration, which was something that we gladly accepted after seeing his previous work and after seeing how well we got along and how our cinematic references really overlapped. It’s rare that you find people who have that creative spark that lacks in most of us and the discipline to fully get the job done. Robert and his entire crew had that! They all put a lot of effort and work into this and we all gladly endured the long and cold German nights. We hope you all enjoy our artistic amalgamation!”