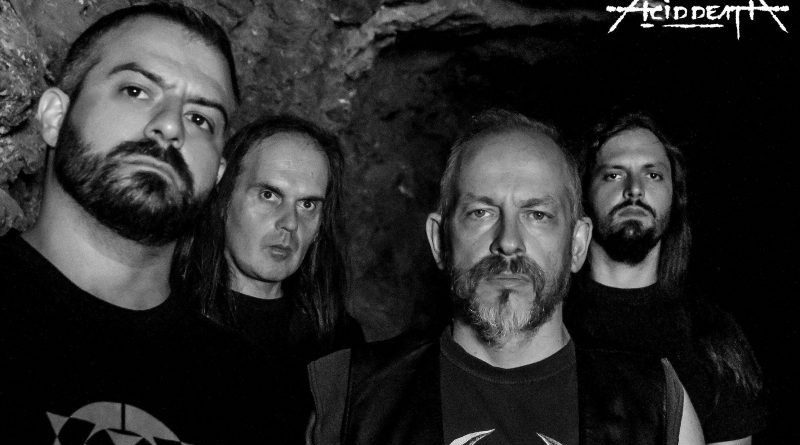 What a huge surprise that was to hear Acid Death’s latest album. Not that we’re talking about some new band that just surfaced some few years ago. Acid Death began in the nineties and although it faced a period of hibernation in the first decade of the current millenium, they were back in 2011 and since then already released 3 albums, with the latest being “Primal Energies”, a monster masterpiece that was distinguished as one of our albums of the month in July. Savvas is the only founding member in the current formation and it was he who received World Of Metal in Acid Death’s lair. – by Fernando Ferreira

Hello Savvas and welcome to our World Of Metal. For starters I would like to tell you that it feels that Acid Death released an album that it will present the band to a whole new generation. Do you agree?

Thank you so much for the interview and the band presentation! We are so proud of the new album, “Primal Energies” Yes, I believe this album can re-introduce us to the old fans and on the other hand to make new ones to keep an eye on our music and work over the years.

“Primal Energies” is a great return after four years of waiting. Did the time lapse between albums turned pressure up for the band? How did you lived this album?

No, actually we didn’t had any preasure for this one, you know it is the good thing for a band to work with a label that gives the freedom of creation without pressing too much. Things started in summer of 2016 when we started processing the new songs and everything finished in January/2019 when we had the final master at hands. Almost 2 ½ years in album process, recordings and all the similar activities, the same time that we were touring, promoting the re-repeases of band’s first albums -Pieces Of Mankind & Random’s Manifest- it was a period full of work!

Sometimes we see bands labeling themselves as progressive or technic but you guys really put the worth on those labels. Did you had any prior objective when you started composing “Primal Energies”? Was there any plan? I ask this because of the tracks flow really great like it was a jam between excellent musicians…

Your words make us really-really happy, thank you so much for that! Well, “yes” and “no” the same time! What I mean on that? Every time that we are on composing process we don’t follow a specificstructure with the meaning that we work as team and everyone offers what he is able to. The same happened to “Primal..” but we saw at the beginning that at first there is more melody in the musical parts we had at hands. We decided not to stop it but to try to update it with more and more process.On the other hand we had some ideas that we never used in the past, e.x. The use of some new intruments such as saxophone or traditional zither instrument. Having the pre-production at hands on time -keep in mind that every song was pre-produced after finishing composing process- we saw that we had the album with a really good flow and no “breaks” between tracks, with the meaning “ok, let’s use this one as a track-filler”. Of course there was a really hard work behind all this, many days and nights improving things over and over again, but finally I believe that we made to do an album that everyone can listen to from the beginning to the end without having the thought “oh no! What a boring part!”

I have to ask you about “My Bloody Crown”… how the hell you thought of having a saxophone solo?!

(Laughs) This was the first “strange” instrument we used in this album! Actually the idea came from Dennis Kostopoulos -band’s guitarist- by saying “hey guys, what if we try a saxophone solo in this part instead of a guitar one?”….We were looking at him on a way like “oh really?….Hmmm Yeap, why not!” Finally I believe it was a really successful part and the saxophone fits perfectly at that track!

Tommy Vetterli was a no-brainer choice for producing? How was working with him?

Tommy is as we say “The Man – The Myth – The Legend”! The same we say also for Martin Zeller, CORONER’s sound engineer who was behind the mixing desk. The first conversations about having Tommy as co-producer took place in 2016 when we had the Italian tour with CORONER, Tommy made clear that “hey guys I would like to listen to the material first before start any process”. So the pre-production files got at his hands in April/2018. He said “ok, we can work on this album!”. Tommy and Martin gave soul to the album and made to give a really powerful production with a specific character. We are really proud to work with them and we hope to have the opportunity to work again with both of them in the future.

Reactionwise, how “Primal Energies” have been received so far between fans and critics?

The reviews we have so far are more than enthusiastic! From fans and from press too. This makes us really happy since we see that everyone loves this album!

Comparing nowadays to the days you’ve released “Pieces Of Mankind” or “Random’s Manifest”, what would be the major differences to point out? From the band’s perspective, I mean.

Things were more difficult those days, we are talking about a season that existed 20 years ago. We were too young trying to create our own style of music in a season that no-one was interested in Progressive Death Metal. Today things are easier, at first there are all the technological tools for helping the musicians to work easier, on the other hand the Metal fans like the progressive way of reaching music. The same time the bands now need more powers for promoting their albums, the music industry is geting harder day-by-day…

Talking about the past, what were the main reasons for the ten year hiatus between 2001 and 2011?

There were many reasins behind this hiatus… At first the inner problems we faced, something that made us to say “ok, let’s stop it before we really hate each-other”. On the other hand we had 12 years in back those days and we felt that the band deserved something better than what we had at hands… If we continued thise days things would be totally different now… I believe that stoping the band in 2001 was a big mistake!

Back to the present and moving to the future, what are the plans you have for touring, if any?

Yes, we are on the way on arranging the next shows, at first we are planning a Greek tour in the autumn, celebrating the 30 years of ACID DEATH as a band-name and after we will try to find a good tour slot for a European tour. It is a dream of life to visit Portugal also!

Being a greek band, how did you managed to get by after all the great crisis that afected your country? In Portugal we all suffered but now things started to get normal, with the scene evolving and multiple shows happening at the same time – something we all thought impossible years ago. Did things in Greece turn for the better? For Acid Death in particular and for the metal scene in general?

Thank you for the interview, greetings from Portugal, hope to see you guys over here someday.

Thank you so much for your good words and this wonderful presentation! We hope to see you all sometime in the near future!