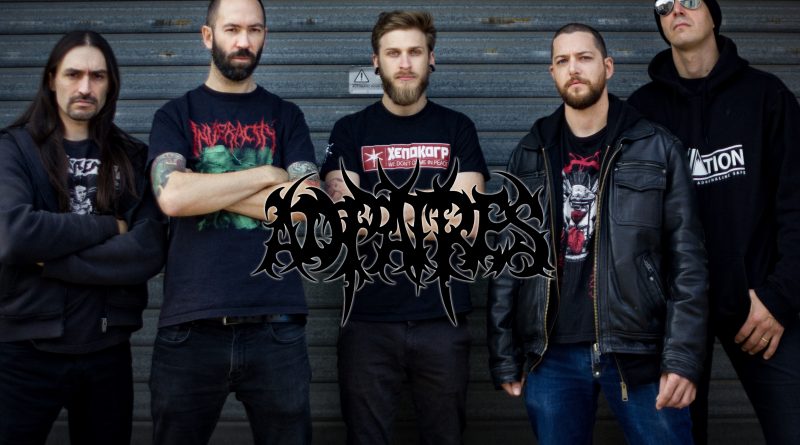 Ad Patres are one of the strongest names in the french death metal underground scene. After a long absense in records, they’ve returned this year for a sophomore album that really shook the ground. “A Brief Introduction to Human Experiments” was powerful enough to kick us in the arse and made us go and talk with Arnaud Pecoste, the bass player and mastermind of the almighty Ad Patres! – Fernando Ferreira

Hello Arnaud and welcome to our World Of Metal! It’s great to talk to you about “A Brief Introduction To Human Experiments”, your latest and great album. How is it to be back with such a strong work?

Hello Fernando, thank you very much for having us with this interview. Obrigado ! It is a great pleasure to be back wih our new album “A Brief Introduction to Human Experiments”, we are really proud to have this out now.

What’s the feedback on the album that you’ve gathered so far?

The reception so far is amazing, lots of great reviews, all the fans are really enthousiastic, that is really important and we feel relieved the have not forgotten us. We also have many exciting shows opportunities coming to us, which is by far one of the most important things, playing live!

“A Brief Introduction To Human Experiments” is released after seven years your debut. What was the main release for this long silence? Did the line-up change, with PY Marani entering the band was one of the causes?

Absolutely not, the integration of guitarist Pierre-Yves Marani was really easy and he did really add some fluidity within the band. The main reason is that I am doing everything by myself and it is a lot of work, to manage a band, produce a record, book gigs, promote, communicate, etc. I have a full time job and family, working for the band is on my spare time, we are non professionals so we can’t dedicate as much time as we’d like.

When did you start writing for this second album?

Olivier Bousquet, our guitar player and composer, wrote the first song “Enclosing Terror” back in 2012 I think, straight in line with the songs for our first album Scorn Aesthetics. We don’t work in sequences like many bands do “composing/recording/touring”. This probably takes longer but in the other hand, we don’t rush to close a sequence of composing with botch songs.

You’re also responsible for all the lyrics, was there any concept that you wanted to focus? What was your main inspiration?

Yes, writing is one of my many attributions and it is not an easy one! My main inspiration was my personal life and feelings. I am very interested in psychology and introspection and I have been through tumultuous moments in my personal life. I did my best to get the positive out of it through writing. There’s a lot intimate about me in there and have developed several ideas, including transcendance of the mind by the flesh and observations on “modern” society and people with individualistic behavior.

Musically, was a team effort?

Absolutely not! Our guitarist Olivier is doing all the composition from riffing to drum parts to song structures. Axel decides vocals phrasing. Pierre-Yves composes his guitar solos and I am writing my bass lines.

Py served as your sound engineer, was this option that made your more comfortable? How would you describe the studio time?

It was much more confortable than bands having to travel a lot to go to the studio because we had the the studio around the corner. Other point of great comfort is confidence we have in Pierre-Yves’ ears and vision of music and musical production. He took tons of extra time to get exactly the result he wanted and worked really hard n the sound of “A Brief Introduction to Human Experiments” . He did great.

Will you go out to promote the album? Where do you expect to go? Any european tour on the plans?

Due to everyday jobs and family duties it is barely not possible to go on our own on a big European tour. Other point is that underground music industry is giving less and less opportunities to bands not accepting to pay support tours and we have difficulty to open for big acts as we do not accept that system. Hopefully there are still some independent and passionate scene supporters that don’t decide only with the wallet. We have a lot of gigs planned in France, we will also play in London for Eradication Deathfest and I am working on booking some more gigs abroad, Switzerland, The Netherlands and hopefully Greece are in the books.

I think we are living the best times in extreme music. We’re getting such great albums like “A Brief Introduction To Human Experiments” that bring back that somewhat lost feeling in death metal but without sounding a simple copy. What is your take on current death metal scene?

I do not like the actual trends for Tech Death and Slam Death, I don’t these are musically interesting and the amount of bands in these trends is drowning bands trying to shape their own style. On the positive, there are lots of great bands emerging from countries around the Mediterranean Sea, more that before I think. I love strong scenes they have at the moment in Italy, Greece and Turkey especially.