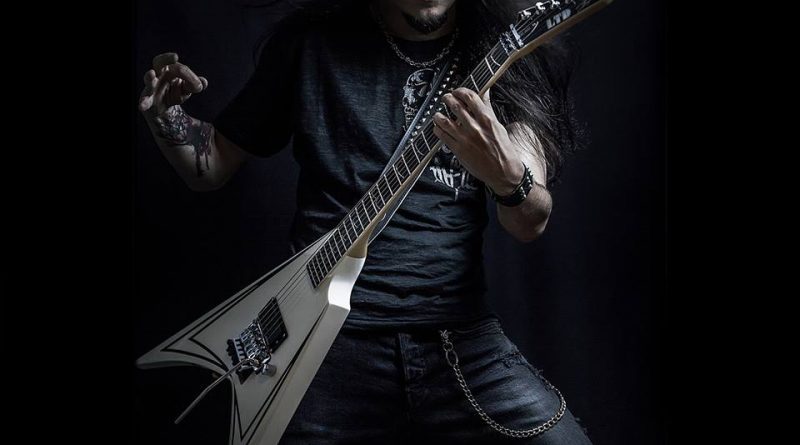 Sometimes, in life, we’re surprised by something unexpected. Something or someone. Bob Katsionis is one of Greece’s top musicians, present in multiple bands and projects, like Firewind. He also has a great solo career that brought us “Prognosis & Synopsis”, one of the best offerings in the power metal/instrumental realm that 2018 has. It was imperative to talk with him and introduce him properly to our World Of Metal. – Fernando Ferreira / Photo – Angelina Str.

Hello and welcome to the World Of Metal Bob. Great talking to you, as you are one of Greece’s magnificent musicians. Before we dive in on the “Prognosis & Synopsis”, let’s make a little introduction for our readers. They may not know but before Firewind, you already had released albums on your own, on your solo project. How did you get to Firewind?

Believe it or not..some friend of Gus and mine INSISTED on me contacting “this young guitarist from Thessaloniki-you guys got to play together somehow”!!! I knew his name and that he is a hard working person, but had no idea of the music. Then I sent him an email like “ok man,we have to do *something* together,you choose” and then he just told me “ok,then come to Thessaloniki to talk about a Japan tour with one of my bands,Firewind” and the rest is history, haha. Truth is that before Firewind I used to play in some of Greece’s biggest metal acts like Septic Flesh, Nightfall and numerous others but my favorite music has always been Power Metal, so…that was a very good timing!

After Firewind, you also participated in other projects and bands like Serious Black, and Outloud. Do you express your creativity in all these bands and projects, or is your own solo (one-man)band where you can explore your ideas like you want?

Yes! Actually, my “secret” on being a pro when it comes to bands is that my solo projects and the other bands I play or write music with, they let me express myself differently and not desperately trying to force all my ideas into my band cause this is what usually brings conflicts within a band. It’s not like working in a Bank or an Insurance company: here we are all artists, and when you have an idea that gets kinda “rejected” from the others you feel you ego torn a bit. So,by making all these solo albums I do whatever I want and keep only the best ideas -or whatever fits best- to my main band which is Firewind.

Let’s focus on “Prognosis & Synopsis”. You wrote, played guitars, bass, keys, produced, mixed and even created the layout. Is it more easier for you to do all this by your own than to delegate or are you just plain and simple workholic?

Yep,that’s exactly what it is. I want to have absolute control over everything. Same happens with Gus for example in his albums etc. My solo albums are my babies, they are a part of me, how could I ever let anybody else play, let’s say for example, the bass or decide on the final sound than me? And now, that I have reached a certain level of experience as a music producer I can do almost everything on my own and whenever I need some help I do it. That’s why I got this great drummer Vangelis Moraitis to play or Nasos Nomikos do the mastering. Same goes for the visuals as well: French artist Aurelien Police did my last two albums and he knows exactly what to do,as well as this young guy Philip Lykostratis who did this awesome unbelievable video for “Dark Matter”:

I suppose this way you are perfectly satisfied with the final result. Didn’t you had the need to distance yourself from the album so that you could ahve a more imparcial opinion?

I think that now I’m gonna freak you out for good: The album was conceived and recorded in a period of… 15 days! Yes. I felt inspired, had a clear vision of what I wanted to do and just did it. Even on some songs that pre-existed as demos or something, I re-visited them and made them sound as if I wrote them today. So,there was no need to go back and take some distance from the music.

What I like most on your album is that you focus on creating great songs instead of just shred all the way. That’s something that it’s natural in you or you make it so, you work so that you0ve got the best music possible?

If you ever get to listen to my first album “Turn Of My Century” you will have all the mindless shredding you will ever need from a keyboard player! (Laughs) But even then, I’ve always been focusing on a melody, theme or mood. I think that the solo albums made a bad name for themselves the last 20 years because people try to PROVE something but there is -most of the times- nothing in their soul. A lot of musicians play an instrument for the sake of the instrument and not the Music itself. Thank God, I still have inspiration and feelings and -again- thank God, I don’t have to prove if I can shred or not. There are thousands of musicians better or faster than me, but -one thing for sure- my melodies and ideas are mine and only mine. Since you dominate a lot of instruments, it’s kind of hard to figure out who are your musical idols, if a guitar player or a keyboard player… who do you consider that had a biggest part on your influences?

“Prognosis & Synopsis” was released independently, without the support of a label. Do you, as you do in the recording, prefer to control the distribution of your music? Because I believe many labels would be interest in releasing and distributing the album… well, if they’re not all deaf!

Well… it’s been released through my newfound SYMMETRIC RECORDS so I definitely have the full and absolute support of myself hahahaha! Times are changing, so we have to adjust. Thank God (again) by touring all these years with bands and playing or working with so many projects and musicians, has made a name for myself so I have a fan base, at least some hundreds or thousands of people who follow and buy my music and support me so I feel super-blessed and happy with that.

Will you go out on tour supporting this album? Do you have any shows scheduled outside Greece or is this a studio only project?

This is the biggest challenge for me but I don’t see it happening. I know a lot of musicians who make solo albums that sound awesome and then I see them playing this music in front of a pathetic crowd, a bad backline and this is not how I imagine a Bob Katsionis concert. and if the circumstances are not exactly how I want them to be… no, I won’t do it.

What are your future plans in your tight schedule? You must plan stuff away ahead…

Unfortunately,…no. There’s no planning ahead. I just do whatever comes every day. Be it the new OUTLOUD album, then the next solo album, or writing some songs with my friends from Kamelot, or producing other people’s music, I just do whatever my whiteboard schedule says. that’s not good but not bad either!

What would be your greatest achievement, that thing that would make you say “now I can go on vacation”.

That’s a great question that no true ARTIST can ever answer. My life is a constant vacation because I love what I do so much that I dont’ need time off. Unless it is some time to play the next FarCry game. Then, I will always find the time for it!

Real pleasure to do this interview Bob, your album is truly inspirational.

Thanx a lot for the interview,it’s been my honor!

You can check out Bob’s lat album below since it’s NOT available in any streaming platform worldwide: https://bobkatsionis.bandcamp.com/