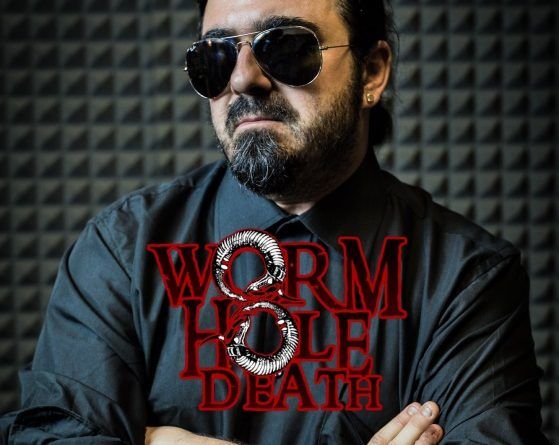 If you follow World Of Metal, you’ve must have noticed how WormHoleDeath is one our favourite labels. Not only they bring us exciting new music constantly as also they show a true enthusiasm towards music, just like we do. And the more we’ve known about them, more we wanted to know. We’ve reached out to Carlo Belotti, the man behind Carlo Belotti Publishing (the main company that includes not only WormHoleDeath but also Epictronic and a whole handful of companies dedicated to the music busness) for a elucidative conversation about the history of the man, the label and the passion. – By Fernando Ferreira

Hello, thanx a lot for your support, honored to be featured on World Of Metal!! When I was a kid, I was singer in a black metal band (Necromass – 1991) and I approached the music business through my band as we released a demo, a few 7” on different labels and a 2 full lengths via Unisound Records (From Greece). While licensing my music to the labels, I learned quite a lot in regards of contracts, deals, distribution and promotion. Later I started another band and I licensed my music again, toured, played at festivals etc…Having learned so much I started helping some bands I liked and started attending Popkomm in Berlin every year. At Popkomm,  I met many insiders from the music industry and started creating my own network, untill I had a meeting with an MD from Warner. This guy from Hilversum, called Arno, really liked my products (I had a small catalogue with the bands I was helping to present) and my approach to the music business so he asked me if I wanted to start a publishing company administered by Warner worldwide. I said yes and he helped, with my lawyer, to start Carlo Bellotti Publishing through Siae. In 2000, thanks to this deal, I was a music publisher and the business started to be a real job and no longer only a hobby. After a few years, still at Popkomm I met a girl called Sara from New York. She was working for the first digital music aggregator (The Orchard, which is now part of Sony Music). That deal changed our lifes in the same way the deal with Warner did and from that moment on, we were able to distribute music worldwide reaching every place in the world. During 2008, we started Wormholedeath with Aural Music Group and from there our growth became faster day by day, giving us the chance to become the company that we are now. Aural Music, but also Plastic Head Distribution and Goodfellas closed the circle giving us the chance to distribute the physical products everywhere. A very instense activity of Media research was the final step to becoming a strong company with a proper worldwide distribution network, publishing division and strong/wide promotion. This is how it all started.

Tell us and describe what are the companies that make part of the group.

Carlo Bellotti Publishig is now a group of companies with Offices in Europe (Firenze), Japan (Tokyo) and USA (Loas Angeles). We have 2 record labels: Wormholedeath (part of Aural Music Group) for Heavy Rock and Metal, Epictronic (distributed by The Orchard/Goodfellas) for Indie Rock, Dub, Downtempo, Jazz, Electronic. We recently started a new label in Beverly Hills called Enfire Entertainment that is specializing in EDM and Rap. One web agency in Milano called Web Is Now, and two B2C agencies for pressing of cds, printing merchandise, graphic artworks, lyric videos, videoclips etc…One is called Volume and operates from Novi Sad in Sebia and the other one is called Firmline Network and operates in Ferrara (Italy). Then we have a translation service for mass market companies (we worked with companies like Yamaha, Swatch, Giochi Preziosi and many more) and a school of English called Centro Per L’inglese Ferrara. We are now working to launch our clothing company called Sigillum Diaboli Wear for the Gothic / Street crowd.

Through the years you must have faced many challenges to the business, including the current moment. Can you share some of them?

Well the biggest challenge has been the transition from physical products to digital … Together with music distribution, the  the media has changed from being printed magazines to web magazines. Even a lot radios have moved onto the web creating the so called “web radios”. That has been the biggest challenge (cause the torrents were giving the chance to everybody to steal the music) but being with pioneers like the Orchard helped us to understand the changes in the market and the sale / distribution of music. Then it changed again from sales to streaming… This has been a huge change ‘cause all the promotion was not done to sell products anymore, but the goal was to get the songs streamed by people… The numbers with streaming became the main thing and they have to be big, huge if you want to make any profit in music. With this, our publishing division really helped the whole company massively, as we have Rap artists who have huge streaming results. Metal is still mainly linked to the idea of “owning the product” so Metal and Rock still sells good amounts of products (digital and physical).  Another big challenge has been the opening of Wormholedeath as it required quite a big investment and a huge amount of work to start the label. Luckily with the support of Aural Music and The Orchard we have been able to launch the label with good profit avoiding loss of money and with the credibilty of a proper label (even if new) belonging to such a great group like Aural Music.

Creatively, what do you think of our current era in heavy music?

I think that the bands are getting better and better…The musicians are more technical and the digital recordings (editing) are giving them the chance to leave their “confort zone” and try more difficult and complicated ideas. The different music genres are now basically just a memory and the bands mix so many different styles…. They even mix mainstream with underground in some cases. The heavy music is becoming heavier and heavier … The amount of extreme submisions we get is unbelivable. I think that the quality is higher than it was in the past, the only problem is space, as with digital distribution and promotion not all the bands signed to a label can release their music. The big support that we give our bands as a label is the A&R supervision (we help bands top create their own identity in order to stand out), wider promotion and distribution of physical products (despite what others say is still very much alive) which are things that the self produced (digital) bands cannot have.

It’s not easy to live from music nowadays, for bands, for promoters, for labels and for music press like us. Do you think things will get better?

Things are getting better and better for us. We will close this year (September) with big growth. The digital era is good and bad. It’s good if you are good as everybody gets to know about you and you get so many opportunities. If you are bad, everybody knows it and you are out…These are 2 faces of the same coin. It will get better when the live shows will start again…At that point we will be ready for a new challenge: the tours.

Is the huge offer of streaming solutions and the lack of proper compensation for the bands something that will strangle bands that are fighting for survival in a world that keeps taking for granted all the art and work that is made with passion and sacrifice?

Yes I hate what “streaming” solutions cause, I believe that people should buy the music how they like, not save it in a bloody spotify account to listen to it again later…Music losses its value like this and bands can’t make much money due to the fact that streming is paid in peanuts. If we were still selling products (even digitally ok) everything would be different, but now that’s the situation and there’s nothing we can do, only be there too, as they all are.

Most music fans would love to have a job in something related to their passion, working in the music business. What would be your advice to them?

The advice is that nothing comes fast or quick. If you want to start working in the music business you need to be patient and work hard for long time before you see any money. In a few words, it has to be your passion, your dream, your hobby. If you work hard for long enough, invest (mainly time) then one day you will get a salary from music, you will get paid. If you give up after 1 or 2 months ‘cause you are not earning money, then this job is not for you…When I was learning I was doing 2 jobs…One job that I didn’t like paid but bills and food, and the other was an unpaid job in music. That’s how it is. It’s a very hard selection.

You’re in a unique position to tell us how do you think the music business will evolve in the future.

New frontier of music promotion is the placement of the songs into the playlists…It’s all about streaming unfortunatly. The winners will be the ones able to generate real organic plays on the straming platforms and the market will go in this direction as well…Subscriptions, Pre-Save, Playlists etc…Horrendous. These playlists will be even more important than youtube plays or Cds sold…

Future projects and endeovors for Carlo Bellotti Publishing in general and WormHoleDeath/Epictronic Records?

My dream is to have our own magazine…We have been trying to create it for long time, and this time we even got close to doing it but the project failed again. As a company, we will try to develop the clothing brand quite a lot and we will invest a lot of time and money on the labels. Wormholedeath is growing and we are working so hard on finding new media partners everyday, we want to give our artists the maximum promotion possible. We are obviously working to get the songs in these bloody playlists and with one of our partners, we are tesiting quite a lot of services and trying to understand how to make this systematic for all bands. Obviously when the bands will start to play again, we’ll focus on finding more concert booking partners, festivals and tours for our artists. Thanx a lot for the space Fernando, really appreciated!!