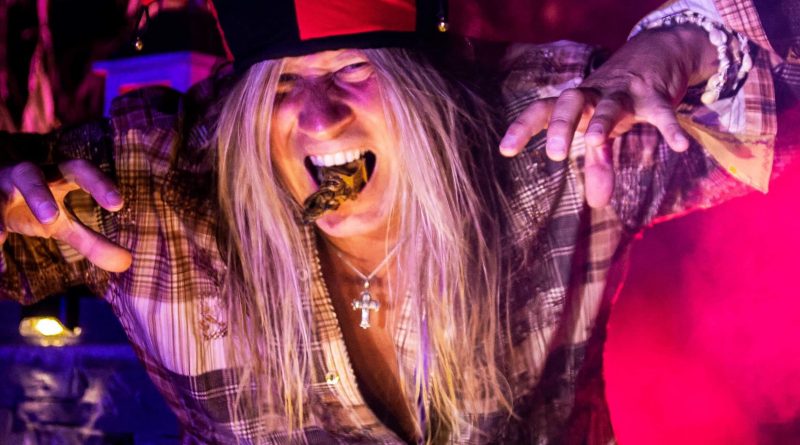 Chris Caffery started playing guitar at the age of eleven and recorded his first demo tape at fourteen. With an enviable musical career, which includes names like Trans-Siberian-Orchestra, it’s to Savatage that his name will always be associated. He has been working on a solo career since 2004, having recently released his sixth studio album – “The Jester’s Court”. And that was the motto for the interview with Chris Caffery, where we talk about the new work, but not only.- By Rosa Soares

Hello Chris, first and foremost, thank you for giving us some of your time. We know that you are very busy with the promotion of your new album, released on July 27th. And that’s where we start: despite being very recent, we already read good reviews. How is the reaction of fans and the general public?

Hi! Thank you so much for the interview! So far the fans and general public have loved this CD. They love the songs, the artwork…just about everything. There have been a few critics that have their usual statements about “Its not Savatage” and “My voice isn’t Jon”. I am used to it by now. I have been happy overall with most of the reaction.

“The Jester’s Court” – the album’s title and its artwork, refers us to a certain “playful” duality, a game, a symbolic joke between good and evil, fun and punishment. How do you define the album?

I have had a very long career. I am very fortunate for that. For over 30 years I have been a professional guitarist, singer, entertainer. My job has been to make people laugh and smile and get joy out of the music myself and my bands have created. Inside that “Jester’s smile” sometimes there is a lot of pain, sometimes there is a lot of happiness. Many times I had no control over what was making me happy or sad. Different elements controlled my life. Personally, financially, physically. It wasn’t my chess board and I wasn’t able to make my own moves. In time I learned it was not only my chess board, but my own Kingdom. You have to take control of your own life if you ever truly want to be happy.  I also learned you can never make everyone happy. You can kill yourself trying. So, I now have some businesses of my own. I have found a very happy spot emotionally being a vocalist. Singing makes me very happy. Financially I am doing ok so I have the room to work more on my music and art. So now it is the Jester’s Court. My time to grow up and accept responsibilities be in control of my kingdom. You can also look at this politically if you wanted to…there are many characters in the world with great power now that I find very entertaining. Not going to discuss politics so I will leave it at that!!!

Most of them are good friends. Angus, Joel, Tony and Jane I work with in TSO. Lost Tonite is a song I wrote for Paul O’Neill. It meant a lot to me to have some of my good friends on this special song. Alessandro I met through the Spirits of Fire recordings. Brian did my last record and I just love his drumming so I asked him again and luckily he was available when I needed the tracks done. I’ve heard the album and let me say that I liked it a lot. Heavy sounds, melodic, excellent riffs. Despite your musical journey, your solo career reveals an artist who knows how to reinvent himself, who has an identity. How do you get away from Chris of the Savatage and the Trans-Siberian Orchestra?

Well, sometimes the elements are there. That is hard to get away from. It is impossible not to be influenced by people like Jon and Criss Oliva, Paul O”Neill. These guys are masters at what they do. It is sad to think 2 of them are now angels but I will always have their influence in me. But I also have many other influences. As a guitarist, writer, singer and musician. Queen, The Beatles, Sabbath, Prince, Dio, Maiden and Priest, Jimmy Hendrix and Stevie Ray…the list goes on and on. I don’t listen to a lot of new music unless I am around it. So my soul is a bit old musically. All I try to do from there is write songs that are fun. Ones that I have fun singing and creating. Or ones that are carrying out my emptions. Hopefully people can connect to these emotions when they hear the music. I like to experiment. I like to use a lot of harmonies. I could do a record like I only had 8 colors of crayons, but I have the 64 crayon box and I like to use all of them!!!

The second theme of the album, is “1989”, which brings us back to those golden years of rock music. I can’t resist asking: what are the main differences between making music today and the ’80s?

Well this relates to that time not just musically but personally. I was 20 yers old!!! I was in Savatage and we were all over MTV. I was touring the world and owned my own home, new car, a boat on a lake…life was crazy fun. Not that it isn’t now but back then I lived every day like it was my last. No consequence. Waking up and brushing off the dirt and dust from the night before and starting over. It was a wave of about 4 years where every day was like Mardi Gras. Now there is nothing wrong with having fun. But I think personally I made some bad decisions and business wise too. That song just says I want to live like that again but do it right. Have the fun but responsibly and make sure my decisions aren’t blindly guided by emotions or whatever drink I was having at that time!

When there will be a Savatage reuionion?

You know the answer to this as well as me unfortunately. I would like to say tomorrow!!! But I cant. Hopefully sometime in the near future we can see that band onstage again. I really think there are so many fans that would love to see it. Not only the ones that saw us 20 years ago but a whole new generation of music and metal fans.

You recorded your first demo tape at the age of 14 … after all these years, what still motivates you to make music?

I always say the never ending fear of a real job!!! 😉 But seriously, its just what I love. It is all I have ever done. I have a hot sauce company now and my company Metalphant which does very well and I enjoy these outside things. Metalphant is based around a tiny mascot of mine named Wilbur and I sell jewelry and clothing and sea glass art to people of all ages through that. But I am a musician. That is where my heart and soul is. So I really don’t need the motivation. What I need more of is time! There never seems to be enough in the day for what I need to do! As a guitarist and vocalist, what are your main influences?

What are the best memories of your entire career? And the worst?

The best memories were definitely the first tours with Savatage. Actually any tours with Savatage! Especially the festival appearances in Europe and South America. TSO headlining the Garden. All of the TSO tours are fun but it is very hard work! The schedule is so busy. I loved the TSO Beethovens Last Night Tours because we only had one show a day and it was the core band again. Which is essentially Savatage minus the vocalists. My worst memories…I never should have left Savatage. I did it to work with my brother and it was a rookie mistake. I could have stayed and done both. I lost the last three years of Criss Oliva’s life and those two tours with him. Things I will never get back. His funeral and Paul O’Neill’s have to be my worst two memories. I will miss them both forever.

Do you already have dates to play “The Jester’s Court” live? Will there be any European tour?

I am discussing possibilities now and as soon as I know I will spread the word. If you have friends that run festivals tell them to put me on the bill!!! Keep an eye out at www.chriscaffery.com or www.facebook .com/chriscafferymusic for all of the news!

Thanks for the interview