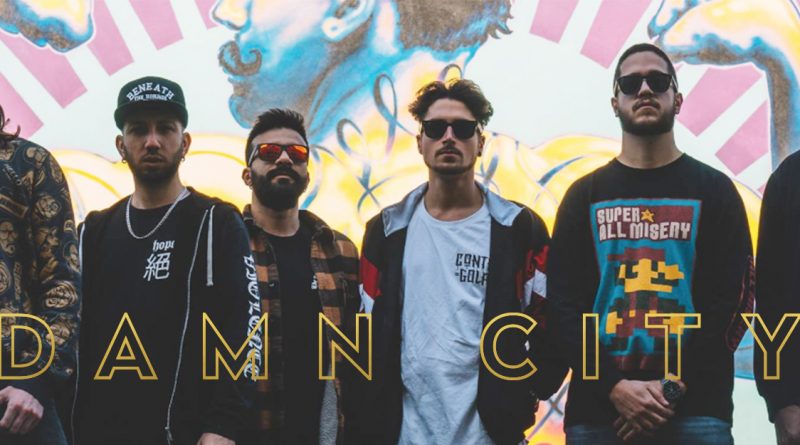 Damn City play a hardcore infused with rap vocals and they were a big surprise over here at World Of Metal. Coming from Italy, they got us a fresh punk/hardcore vibe with a modern twist and always a positive message as you can hear on “Gold Kids”. We’ve talked with Fred, Damn City guitar player and here’s the result.

Hello Fred and welcome to our World Of Metal. “Gold Kids”, third album out there… how is the present moment in the band? Ecstatic for releasing “Gold Kids”?

Hello World Of Metal, pleasure to be here. Yeah “Gold Kids” is finally out after a lot of time in the studio, we’ve been there for 9 months. We’re really happy about it and it’s a huge satisfaction after all this time to let you all hear our new album. It took us a lot of time because Mex and Tommy (ex guitarist and ex bass player) left the band a year and a half ago. In that moment the line-up was complete but me (Fred, guitarst) and Bamby (bass player) were leaving for Australia but at the same time Mazzio (guitarist) and Flint (DJ) joined the band, so fortunately Damn City kept on playing shows and working on the album. Actually, “Double Dragon” was written 2 years and a half ago, just to let you know how much work and effort we spent on these songs. We wanted to let them sound as good as possible. This is the first album with synths & electronics part in it thanks to DJ Flint (he was the bass player while we were abroad and he was even writing the electronic stuff for “Gold Kids” in the meantime), as the first time for us we wanted to do it in the best way we could so that’s why it took us a while. We’re now taking a bit of time for us ‘cause the last 2 years where a non-stop period of shows, practising, studio.. we’ve been even in Mexico last december for 2 weeks. It’s summer time now so we’re still doing the same things but with no rush. We all need some holidays to start all over again in the best way. We’re going to play some gigs during summer and shot some footage for new videos and we’ve got a lot planned after summer, we’re going to promote our new album in & out Italy.

I found curious some of the titles of the songs like “Double Dragon”, Karmageddon”, “Metal Slug” that report to my childhood and adolescence, when these where addicting games. Can you see “Gold Kids” as some kind of conceptual album about those golden years?

Fun fact: wherever we find a classic arcade in a venue Alex literally sticks to it until it’s time to play on stage. He’s a Metal Slug champion. We’re all a bit nerdy if we talk about videogames, tv series, movies and stuff. “Gold Kids” is essentially a pure homage to all the 90s kids and all the best stuff in that years. Every song is a pure reference to something of that era, we’re all pure lovers of those times, you can see that in the way we dress, we do graphics, lot of music we like and love is from that period. “Fresh Prince 051” is a tribute to “Fresh Prince Of Bel Air”, tv show that we all love and we wanted to do a kind of cover of the main theme. The lyrics anyway are all made and referred to our crew “Nuke Crew”, we’re really proud of it and that’s way the song features three really good friends of us. There’s various different topics you can find in this album, bullism (“Lords Of Dogtown”), knowing that we’re all growing up but with consciouness (“Bangarang”), who the real monsters are in modern society (“Monsters In My Pocket”). So yeah, “Gold Kids” is (lyrically and sometimes musically) our tribute to that special years of our life.

The sound of “Gold Kids” is quite powerful. Who was in charge of the production duties and where it was recorded?

We normally start and do all our pre-productions in our music room in Bologna, our city. This time we had the possibilty to record the album at the “Morphing Studio” in Bologna with Cristiano Santini (member of Disciplinatha, a legendary punk rock band from our city, they became famous in the 80s because of their strong and provocatory topics and the way they played shows) and Francesco Pinto which is a really good friend of us. Cristiano did also the mix and the master was made by Nicola Fantozzi. We made all the production work before and while we were in the studio and we wanted this album to sound big, fat but even deep and with tons of colors and it finally came out as we wanted in the beginning. Easy to tell that without our DJ Flint “Gold Kids” would have been totally different. One of our biggest dreams since years was to have a DJ in the band and we finally have it and we’re super happy about it. That’s one of the reason you have to take “Gold Kids” just as a step for a new sound. This album is our first experiment that can open our sound to a huge amount of new possibilties. Years ago we were just a classic hardcore/metal band, but we all believe that growing up (as a band) is made by this, interact with new types of music, experiment, try to add more stuff to your sound and avoid to stick to things you’ve already done.

Being the third album, did you felt you had something special on hands?

Yes we did. We’ve never spent a total of hours like this in the studio. We’re all really proud of the work and effort put in this new album and our main goal with it is finally reached. Even the amount of time that we spent and we’re still spending in the music room is huge, working every day on our show and to become as tight as possible on stage. Believe me, this album has been an enormous and not easy to reach destination, but we ended up in it. We can’t wait to keep on working on our new sound and on new songs. I think you’ll maybe hear something new not in a long time!

This songs get a huge live feeling within them. It feels that they were born to be played live. I guess that this always a point that you have special care when writing these songs?

Absolutely. For example, “No Heroes” (first album), was created to be a pure, strong and straight (but with positive vibes) “Punch in the face” on stage. Our style was so different those days, even for the members inside, only Alex (singer) and Toro (drummer and singer) are from that period. As time goes, you understand who is open-minded musically and who isn’t and that can be one reason that puts you in the place to decide: “are we going to play hardcore all our life or not?”. “Pariah” (second album) is a bit different, still hardcore/metal, but you can clearly hear rap verses, melodic choruses, more mature lyrics, there’s a step forward. It was also mixed with a more “garage” style. The intention was to have an album which was less exaggerated and overloaded as sounds, so on stage our songs would have been better than the ones recorded. We’re playing all our new songs live and try to understand which works better in which moment. We always want people to have the best time ever at our shows and that’s one of the reasons why we always try to think (while writing new songs) which way is best for it to sound good for the audience and to make people interact with us. We love to play music on stage, we want to refine us as much as we can but still with our musical attitude, the one that created Damn City in 2011.

You’re one of those bands that seems to live and breathe on a stage. What do you prefer more, playing live or writing or recording in the studio?

Well, it depends. As a six members band, everyone of us has a different opinion. I like either, usually in some months of the year where i’m free from other things i take my time to write songs and i really enjoy it. Going to the studio is not easy, usually you’re always under a lot of stress because you want things to work in the best way at the first tries. I love anyway the way you feel in the studio, the way the raw music you created takes shape in high quality sound. Anyway, I’d probably say that i prefer to play shows, i love the attitude, the waiting of play your set, see the merch of the bands, make new friends. Alex loves to play shows and he literally hates going to the studio because of the pressure. It’s not easy to record vocal lines at your best without mistakes. It’s just probably something about your mind, he did a really good job in the studio but he was always thinking at the same time “i can do better”. Toro and Mazzio like to play on stage but even record in the studio, Bamby and Flint prefer to be on the stage.

What do you have planned for live activity outside Italy?

We can’t say much at the moment but we got a lot of things planned for the future, expecially after the summer. We’ll go surely in Switzerland, Austria, Germany, Czech Republic, Slovenia. Lots of Europe, but we’re even working on new countries to reach new people.

What would it be, for you, the greatest thing you would achieve with Damn City?

Going to Mexico was a huge pleasure and one of the best things happened in my life. Bring your own music outside your country is one of the greatest thing that can happen in your life as a band. So, we’ll try to keep on doing that as much as we can.