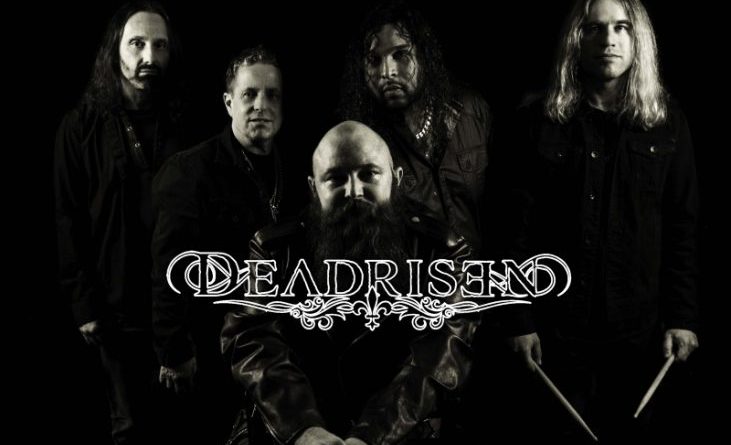 “DeadRisen is an explosive cocktail of older musicians with young new school guys. Together they create a metal sound that can go from blues, to classical, to thrash and beyond. The band also incorporates unique kinds of music such as Latin-flamenco overtones, but without losing heaviness.” World Of Metal took the opportunity to speak with the well-known Mike Le Pond, one of the members of this project. by Miguel Correia

Hi Mike, thanks again for the opportunity of this interview and this is the third time that I interview you, but always for different reasons … you don’t stop. How did this participation happen or is it something more serious?

I have been playing with Rod Rivera (guitarist) since 2007. We had a band called Rivera/Bomma. When John Bomma(singer) quit, we decided to form a supergroup of unknown musicians. A Unit that sounded like all the bands we loved when we were younger. This was the birth of DeadRisen.

Funny, even before I heard when I noticed your name involved, I thought, well if he is there then that will have quality and I was not mistaken. How do you see this Deadrisen record?

We wanted the DeadRisen record to feel like a live concert, with lots of jamming sections like you would see many of the older hard rock bands do. We wanted the album to have no boundaries. It could sound like anything from Rainbow to Testament. I think we achieved that.

The authorship of the cover that is fantastic? Who is behind this idea?

For about a year we tried to work with some artists to get a cool cover. Finally, we met Drake Mefestta, who gave us exactly what we wanted in literally his first attempt. We were looking for something retro and not fantasy art like every other metal band. An older looking photo with modern techniques.

Together you create a metal sound that can go from blues, to classical, to thrash and beyond. The band also incorporates unique kinds of music such as Latin-flamenco overtones, but without losing heaviness. Wow how do you get all this?

Rod Rivera’s father was a professional Flamenco guitarist, so he grew up with that. Combine that influence with his love for Blackmore, and it gives him a unique style and sound. I also love medieval folk music, so we were able to master the art of combining metal with these other cool styles.

In the end, what surprised you the most with this album?

In the end, we were very happy with the way the album flowed from beginning to end. Every song had its own feel and mood. The playing was top notch and the production was big and raw. It inspires us to write bigger and better songs.

The cover of “For Whom The Bell Tolls”, just fantastic, how did the idea to do it and introduce it in the alignment of this record?

We wanted to do a cover on this record. Everyone had ideas, but we were getting nowhere. Rod was a teacher at a local music school. One of his students asked to learn that song. Since it was now fresh in his mind, we decided to try it. It sounded cool with the keyboard in there.

This is more and more a line of work to be followed by many musicians, different projects, different sounds, a way of learning and also a way to gain something else. How do you manage your time?

In order to do so many projects, I have to manage my time well. I am a very organized person. I wake up at 5am every day and practice for 2 hours. By the time everyone in my house starts to wake up, I am already finished for the day. It works great for me.

It may be early, which of course it will be, but will there be room for a second Deadrisen record?

We all are so proud of this album and we want to record a 2nd one as soon as possible. I think we can make a better one. The band is so talented, and the sky is the limit for our songwriting and career.  As long as we have the label support, there is nothing we can’t accomplish.

Look, I can’t help talking about the current moment that the world is experiencing, as an artist and as a person, how do you see this situation?

This is something we have never seen before in our lifetime. I know everyone is afraid. Trust me, we will defeat this virus. The best doctors on earth are working on it and together, we will win. God will deliver us from this nightmare.

Everything has changed or everything is going to change, what do you feel can come around?

I think we must learn from this pandemic. Now the world will be much more prepared for such a catastrophe. This is a good thing. Also, people will appreciate the simple things in life a lot more. This will bring us all together.

I know you’re also working on your next solo record. Are there already deadlines?

The next Mike LePond’s Silent Assassins album will be called “Whore of Babylon”. The release date is May 29, 2020. The record company will be Silver Lining music from the U.K. I am so excited. This is my baby and labor of love.

The return was scheduled with Ross The Boss, meanwhile canceled. Are there any plans for rescheduling?

My tours with Ross the Boss and Symphony X have been postponed. Both will be rescheduled for 2021. I miss playing on stage, but I will take this time at home to compose a 4th solo album. I can’t stop working.

It is easy to work when those around us have quality and it is always a motivation to overcome being with such musicians. You are naturally proud of your journey. One day you will tell your grandchildren all the adventures of this career or they better not even know it?

When I finally retire, I will have no regrets and will be so happy that I was once a rock star. I will feel blessed that I contributed to the world of heavy metal. I won’t talk about it much but if someone asks, then I will be happy to tell them about my wild journey through the world of Rock n Roll.

Let’s drink to our friendship and heavy metal!