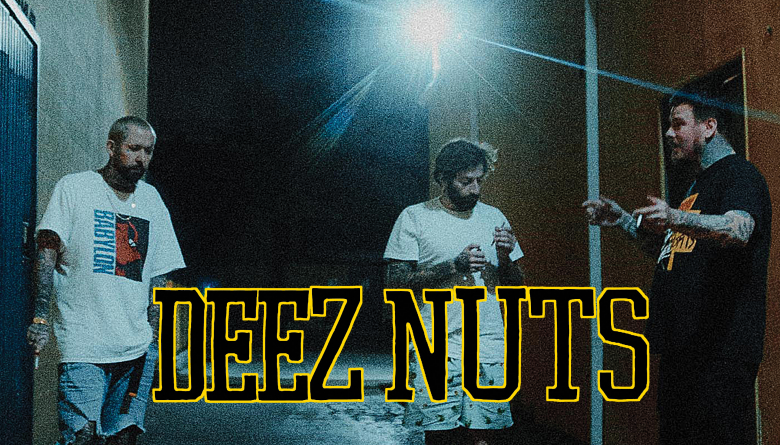 Deez Nuts need no introduction. Coming from Melbourne, Australia, the band is growing and getting better every album they release. And now here it is “You Got Me Fucked Up” by Deez Nuts, an album that, according to J.J. Peters, frontman and founding member, this is the album that the band needed to write. World Of Metal reached out to J.J. to know more about it. – Photo by Daniel Prieb

“You Got Me Fucked Up” is finally out. Who are those ones that got you fucked up today?

Finally! The title is kind of a double entendre, for both having us misunderstood, as well getting us just as “fucked up” as our reputation has us for getting other people. (laughs)

On a recent statement about the new album, you said “It contains “ten hard hardcore songs” and “no 20-second joke songs”. Would you say this makes it your more serious record to date? Do you think you’ll get more of a mature audience with the upcoming album?

I don’t know if I used the words “hardcore songs” and “joke songs”, but i think what I was trying to get at was there is no filler on this song, every song is a well written well executed song. I think our audience is pretty mature already, plus there was no funny/party content on “Binge & Purgatory” and almost none on “Word Is Bound”. but i hope to just reach more people no matter there level of maturity.

What would you say were the main differences with writing this album in Toronto, rather than New York? And what about the recording process, why Los Angeles instead of Boston?

We just wanted to mix it up after three albums with the exact same process. toronto was less distractions for the other two members and LA was just better weather. although we really didnt leave the studio at all so it didnt really make a difference.

Your debut album “Stay True” was such an important record back in the day, and you recently took the opportunity to take it back to the street with the 11th anniversary tour. Do you think that its message is still relevant today?

Its message should always be present, the message was always to stay true to yourself no matter what other expect of you, as we did at that point in our career and continue to do today with the new album. the irony is people try and tell us we dont “stay true” to like we did on that album, when the message was always about being yourself.

Are you looking forward to putting this record through its paces and touring Europe next Month?

Yeah, man, can’t wait, watching the responses online and stream numbers, etc., is a good gauge of how well a song is received, but you really never know what’s a hit ‘till it’s played live, the crowd decides what’s a hit every night.

Can we expect a Deez Nuts gig in Portugal soon? What memories do you have from performing in our country?

Yes, for sure in 2020! We’d go all of the time if we could, but don’t want to over stay our welcome (laughs). Some of our fav people are from there and we have nothing but great memories of performing there.

Hardcore is going through a great expanding phase but in the grand picture of modern music, as all heavy music in general, it doesn’t get as popular as pop, R&B and hip hop. Do you think that it will get bigger like that or is it supposed to be an underground genre?

I would say its supposed to be like that and it will stay like that, but the same could be said about hip hop and even rock n roll at somepoints so who knows what the future holds.

A final message to your fans.

Thanks for taking the time to read this, please have a listen to our new album, if you dont like it you never have to listen again (laughs(, but i think you might love it.