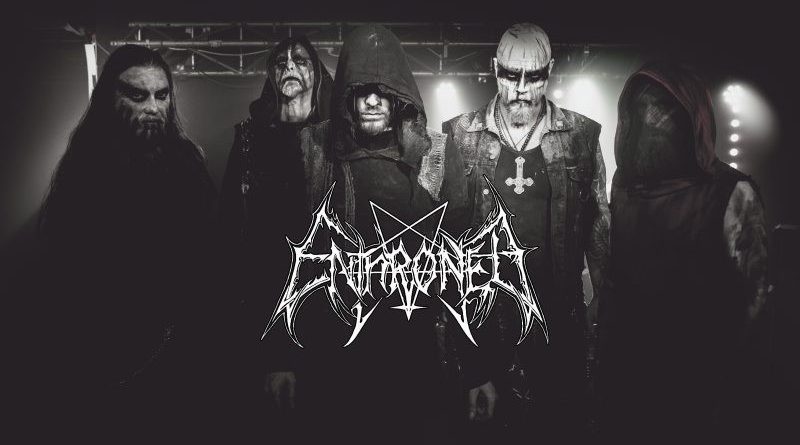 Enthroned is one of the mightiest black metal bands coming from Belgium and of Europe’s finest examples of the black arts manifestation. A five year of absense did not change that status. In fact, it only made that our interest in “Cold Black Suns” grew even more. Menthor, the mighty portuguese drummer for Enthroned talked with us about the dark world of the belgian band. – By Daniel Pinheiro

“Cold Black Suns” just came out and it shows growth, evolution. Is there still a desire to evolve and go beyond the narrow structure of what we commonly call Black Metal?

There was an intention to push and better ourselves as much as possible to try to get a good work of art in the end, that was one of the main forces that drove us and ultimately made this album what it is. I never found Black Metal to be limiting or have a narrow structure – even though there are a lot of new elements in the new album, it still is Black Metal.

Four years since your last endeavour, new members. The more than obvious question: how have these operated a change in Enthroned’s sound?

Actually, not that much. Most of the songs were written by me, Neraath and Nornagest so the changes you hear are not coming from the new members, even though they had the same input on the album. These changes have mostly come about because we felt that this album should reflect a sound that represents us as a collective. We tried to be as honest as possible with our artistic voice, both as individuals and at the same time in a way that allows everybody in the band to have their own voice too, so the final result – even though it could be seen as a collective representation of everybody in the band – seems to me to be Alien and unexpected, something that has a life of its own.

This new album sees the light of day through Season of Mist. How did you come to this newly celebrated relation?

Some of the guys in Enthroned have already been friends with Michael (SoM) for quite a long time; both Neraath and I have other bands that are signed to the label (Emptiness and Nightbringer); and there had already been talks to sign Enthroned, but for one reason or another it had not happened, so the whole process went quite smoothly.

Are there still barriers to be demolished, within Black Metal?

If you are referring to musical barriers, I have never felt that musically I had barriers to demolish in black metal, since it was one of the music styles that is quite wide where you really can do a lot. Maybe one barrier to demolish is to not put this kind of music in a box called black metal. Give it a name and you take away the possibility of it being something else.

You craft a Black Metal sound that goes along with a specific message, one that has lived within the genre for years. Is your music a vehicle of your spiritual thinking?

That is a discussion that could last for a while. Yes, people present themselves in this genre as being the carriers of a specific message that supposedly is representative of this music genre but when I talk with people about this supposed message I realise that it is not something that you can define as “one message” or one point of view and it seems at times very incoherent. Even in Enthroned there is a thematic that is present in our music and in the band’s identity, but different people in the band have different views and opinions about the same subjects. This is something that we talk about and discuss when we are together and I think in some ways the last album reflects that more than any of the previous Enthroned albums. As for whether our music is a vehicle for our spiritual thinking, I could ask what do you mean by spiritual thinking and that would be another discussion that could last a while but I will just say, yes it is a vehicle for something that is happening inside of us or maybe outside and expressing itself through us…

Is “Cold Black Suns” the ultimate expression of that spiritual thinking?

I wouldn’t say the ultimate expression but a step in the right direction for sure.

You and Norgaath were once members of Portuguese Black Metallers Corpus Christii, “Ophiusa” and now the recording of your new album at Pike Studios Audio. It seems you have a good relation with Portugal. How did that come to happen?

Well I lived in Portugal for 22 years and I see Portugal as my motherland, even though I was born and lived in Spain, so I suppose that would explain the good relationship with Portugal and the influence coming from Iberian history and philosophy that you can find conceptually on the album. As for Pike Studios we were looking for a very specific sound for this album and I knew that we could achieve it working with Carlos Ribeiro at Pike Studios, with whom I had already worked previously in several projects, so that was an easy and logical choice.

Supposing you keep yourself updated in terms of the Black Metal scene, what are those “little pearls” that have caught your eyes in recent times? Have they, in any way, been a source of inspiration for what Enthroned has been crafting?

I tried not to be influenced by other music when writing the new Enthroned album, but for sure there is some unconscious influence coming from the music I listen and used to listen to when I was younger. I also listen to a lot of music outside of the black metal genre. As for black metal bands that I have been listening to a lot recently I would say Ruins of Beverast and Craft.

Enthroned come a long way since that 1995 Black Metal classic, “Prophecies of a Pagan Fire”. What has changed, in your perspective, in Black Metal?

Well I wasn’t in the band back then, but from what I can observe in the genre, there was this “innocence” to the way things were done back then that I sometimes miss.

Is the overall present Black Metal Scene, one you identify yourself with?

I personally have never identified with the Black metal scene per se, I find that to be very limiting, it can be dangerous to your soul when you do that without deep reflection. The aesthetic that I found in this artistic movement is something that I use as a tool to have a positive output to the world and I get the same out of it.

Thank you for your time and your kind words. Hope Portugal has the opportunity to witness “Ophiusa”, amongst many other classics, live, in a near future.

Thank you for the interview and that will surely happen in a near future.