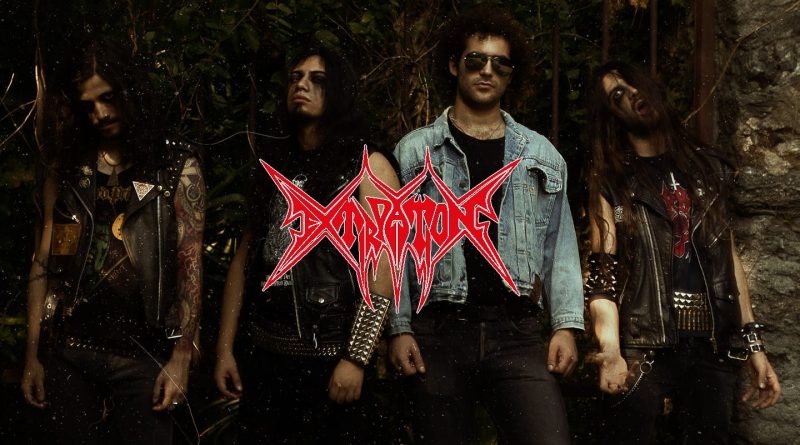 Extirpation is on of the most underrated metal juggernauts out there. The italian band left a deep scar on our soul with mitghty show in SMSF and since then we’ve kept a close eye on them. “A Damnation’s Stairway to the Altar of Failure” is a kickass album and also the perfect excuse to talk to guitar player Hellros, from the unbelievable insane Extirpation.

Hello Hellrosand welcome to our World Of Metal. First thing first, before we talk about your new album, I’ve got to confess, your gig on SMSF is still on our memory as the craziest we have ever saw! Do you rememer that concert?

Yeah, we remember very well this gig, Was the best of the tour, the audience was amazing! We didnt expect it because the show was at 2 am. Crazy Portugal! Hope to be back sometime soon!

“A Damnation’s Stairway To The Altar Of Failure is your third album. Usually the third one is seen as the definitive of a band. Did you felt any kind of pressure for this one?

I dont know if is the definitive one but is the most complete album of the band, riffs are sick and production is very great. Can’t wait to play this album on stage.

It is released four years after you sophomore album. What was the main cause for taking this long to release it?

We spent a lot of time in gigs, we have an hard life outside the band so, four years was a good compromise.

Your sound is a mix, a marvellous mixture between thrash, death and black metal, which take us to that to that primal and primitive feeling of the extreme metal, something that in this album is kept well alive. Is this a good description of this album and your overall sound?

Our sound is 100% Extirpation Metal! Don’t give a fuck about the rest! Black, death, thrash tags are not important to us.

How were the recordings sessions? I know that you recorded in SPVN Studio…

Recording sessions was difficult, we really haven’t had much time to record and we had some problems too but we are super proud of this work. We recorded at SPVN studios by Stefano Santi, this guy is super professional, he is the sound engineering of Incantation, Broken Hope, Enthroned, etc. And everything was mixed and mastered by our friend Marco from Demonomancy! They did a killer job!

You reach this year your first decade in existance. Nothing better to celebrate than to release an album. Are you planning to do something else special?

We are going to make some exclusive gigs in October/November for the 10th anniversary. In 2020 we will back on stage for festival shows.

How about playing live? Anything lined up for the promotion on stages? It would be great to see you guys again!

Would be great to back there in 2020. Who knows! We are working on it.

What do you prefer, write/record or playing live? From what we know, you really put your soul on stage!

Yeah, we really like to write songs and record it, we are totally involved in our music but live shows are our strength. We played a lot of crazy shows and we always received a lot of killer responses.

What does miss Extirpation to achieve? What is your greater objective yet to accomplish?

Our objective is play more shows and record more killer stuff for the next ten years!! Hails to World of Metal and thanks a lot for the interview! Hope to burn portugal very soon!