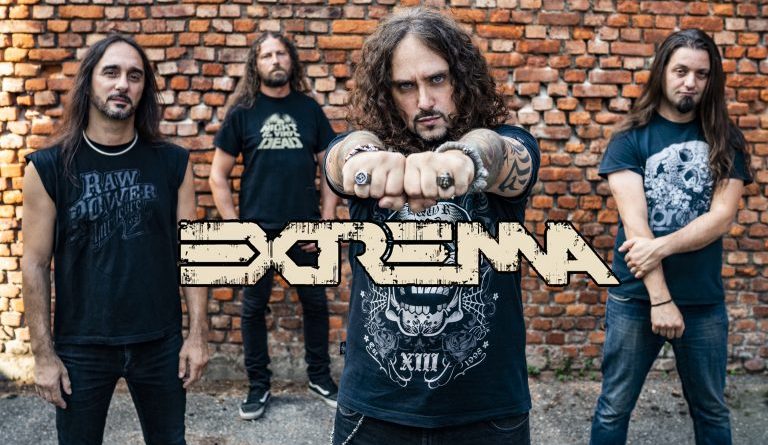 Extrema is one of Italy’s classic thrash metal names. With a career with more than thirty years, the band founded by Tommy Massara is been giving us modern thrash metal with great quality. And just now we had a good example, “Headbanging Forever”, their latest opus and that was the main reason to talk with Tommy. By Fernando Ferreira

Hello Tommy and welcome to our World Of Metal! And you’re back after a long time without releasing any album. Before diving on “Headbanging Forever”, I’ve got to ask… what took you guys so long to put it out there?

Hallo there guys, it’s a pleasure for us to be here at WoM. Well that it’s not 100% true, in 2016 we have released a Mini album titled “The old school EP” that contains songs written in 1987 and never recorded  before. Anyway the main reason why it took so long is that after the European tour we did in 2013 with Death Angel we party ways with our long time drummer Paolo Crimi that has been replaced by Francesco “Frullo” La Rosa at that point we decided to release the EP. In the meantime the problems within the band and our former singer GL Perotti reached an unacceptable level and in 2017 we decided to part ways from him. Only at that point we had a sufficent serenity to start working for real on the new album.

“Headbanging Forever” is a great thrash metal record bringing old school and new school together. What was your objective for this album? What was that you wanted to explore this time?

Being a band so experient, studio must not bring many surprises for you. Even so, how was it this time? Where did you record it?

The studio time it’s always a great moment of fun and creativity where to share ideas and find the best solution to do the best music we can, for us it’s always a surprise, otherwise I think we will not be able to write any good music at all, the attitude and spirit reminds me always the first time we hit a studio back in the ‘80’s. “Headbanging forever” has been recorded at Fear studios in Alfonsine nearby Ravenna, in Italy. It’s the studio of our long time engineer and co producer Gabry Ravaglia, there we did our last three recordings: “The seed of foolishness” – “The old school EP” and of course “Headbanging forever”.

This is the first album with Tiziano Spigno. What kind of input did he have on the writing of the album?

When Tiziano Joined the Band it was a Risk and a bet, the only certain thing when we party ways with GL it was that we wanted a different singer that could approach the songs on a different level. To have a clone of what we had before was more to not have respect for our past, so when the decision has been taken we gone straight for our way without listening the critics too much. So when the time to write the new vocal lines come me and Tiziano met several times just to focus on what has to be the path to follow, when we finally found the right balance between his vocal quality and what we thought was better for the Band, I leave him alone to write and propose his own vision. The final result is out there, “Headbanging forever”

It feels that Extrema is stronger than ever, is that the feeling within the band?

Absolutely yes, we are passing a really positive and creative moment in the band, we are finally again all toghether focused on the music and not on things that have nothing to do with music.

Extrema is a band with more than three decades in metal, that lived many eras of heavy music. Do you have some kind of nostalgia of the scene in the 80’s or do you feel heavy music is better than ever?

Well , in the ‘80’s Metal music was more coloured for me, and I’m still deeply in love with most of that production, I’m still buying old records. Today Metal it’s a more like an assembly line, most of the records companies wants a certain type of metal, and sometimes you can distinguish bands from bands, they sound too much similar between them, this is my opinion, maybe it’s wrong maybe not. Personally I prefer as told before old music.

With that legacy and history, is it hard to choose the songs to play live?

(Laughs) Absolutely yes, above all when you play festival and you play short sets.

Where do you expect to go in tour? Any plans for stepping out of Italy?

We have some booked shows, not too much to be honest, we don’t have an agent at the moment so we self book our shows. We are at the moment looking for a good European tour to support, we will see what happen in the next week/months.

What would the dream tour for you to play with Extrema? Where and with who?