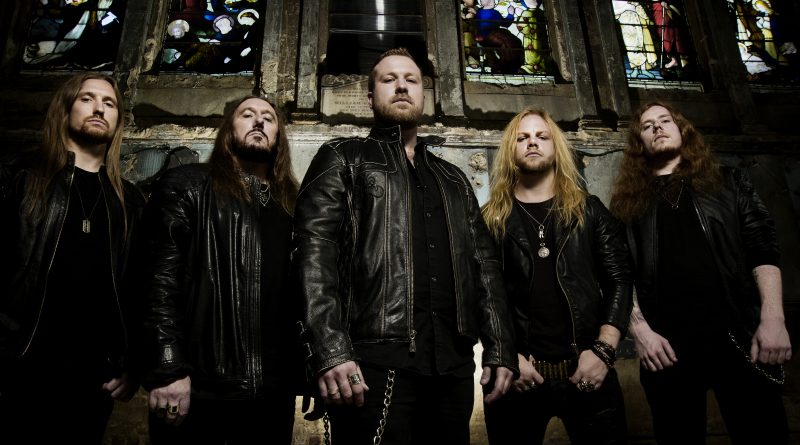 Forged In Black is one of the greatest new sensations in traditional metal and they’re back with their sophomore album “Descent Of The Serpent”. Fusing heavy with powerfull thrash metal, what you have is a must have for any metal lover. World Of Metal reached Kieron Rochester, Forged In Black’s bass player, for a nice little chat.

Hello and welcome to our World Of Metal. And it’s always nice talking to an english band that plays the good and old heavy metal. Did you ever felt some responsibility for being a new generation that follows such illustrous bands like Iron Maiden or Onslaught?

Yeah we certainly aren’t shy about showing our influences but to us, the final product ends up being our own unique sound so we try not to compare. We obviously would like to be another flag bearer for British heavy metal like our aformentioned heroes but really our responsibility starts and stops with us and our fan.

“Descent of the Serpent” is a great album that has all the classic trademarks but yet can feel that was done nowadays, sounding modern but yet organic. Did you had any special care in maintaing the classic vibe but yet having a powerful sound that didn’t sounded too digital, too… fake?

Going to Romesh Dodangoda certainly helped with achieving that classic yet contemporary sound. Our style certainly lends to this but Romesh really helped the record by achieving a sound that reflects our live shows. Recreating the feel of our live shows is integral to understanding our style of classic and modern and we think DotS does this.

How was it to work with Romesh Dodangoda, the producer of “Descent Of The Serpent”?

It was a real eye opening experience in terms of how prepared you need to be when entering the studio. He really made sure he got the best performances from all of us and pushed us to be the best players we could be. He was a true professional.

“Descent Of The Serpent” was released six years after the debut. Did you experience some difficulties that didn’t permit to release it sooner? I guess the line-up changes took its toll…

Line up changes always affect timings but really the main reason that the albums are so far apart is that we turned our focus to making EPs. We felt that making EPs was a good way of getting our sound out more regularly and we’re reall proud of the material on those collections. We’ve since realised the priceless value of releasing an album and will be looking to keep with this philosophy in future.

How did you came to Fighter Records’ rooster?

The guys at Imperative PR have helped in getting our music out to a variety of different areas, including Spain. This seemed to be an area where we were getting lots of airplay and positive reviews so getting our record over to Fighter seemed like a great idea. We piqued their interest and we’ve had a great working relationship ever since.

The album is out and being great, I’m curious to know the feedback you’ve been getting in the media and, of course, by your fans.

The album has been well received from a number of huge metal outlets. Zero Tolerance, Powerplay and Metal Hammer Portugal have all given the record great reviews and it’s been an honour to receive their kind words. Our fans ,as ever, have been so supportive and encouraging. It’s always great to play a gig and see people wearing the album t shirts and knowing the songs – their response has been amazing.

There it seems to be a renewed interest in heavy and thrash metal. Do you think there will be an explosion like in the 80’s or is it unlikely, will metal and all its subgenres  remained underground?

I think what’s great about metal nowadays is that there’s no real trend of bands that become the most popular. There’s such a variety of different metal styles that become popular these days and it seems like all sub-genres are getting a chance to shine.

How about a touring, what do you have planned for the coming times?

Touring is definitely on the horizon and we’re busy behind the scenes trying to make that happen but our immediate plan is to make sure we storm the VIP stage at this year’s Bloodstock festival. It’s an honour to have been asked back after our first performance there in 2012 and we can’t wait to show the Bloodstock crowd how we’ve evolved.

Being an english band how do you see all this Brexit deal and how do you think will affect you and all the bands that have aspirations to tour throughout Europe? Do you think it will bring you more trouble and hardship, added to all the ones there are now?

Logistically there might be the odd problem in making it overseas but we hope that there’ll be nothing too major. Whatever the case, we hope that metal will unite people and we can see past all the division.