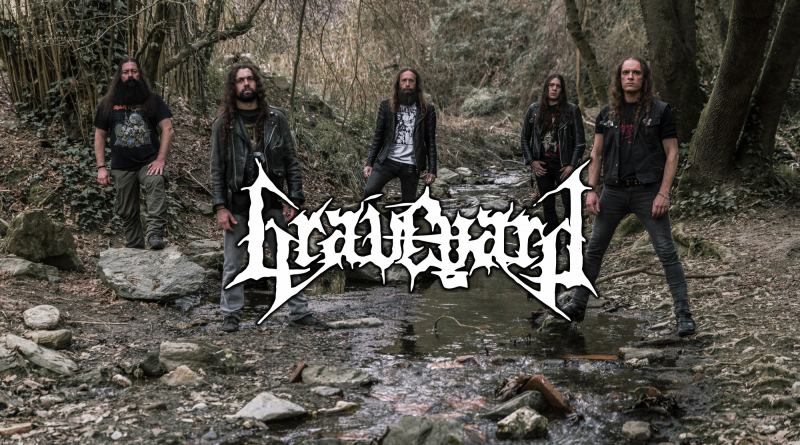 Graveyard is one of Spain’s best exports in Death Metal and to prove this statement, they’ve recently released “Hold Back The Dawn”, their fourth album, which is a powerful force in extreme metal. Obviously we got in touch with the guys and Julkarn (vocals and bass) and Javi Bastard (guitars) received us and answered our inquiries. – By Fernando Ferreira

Hello and welcome to our World Of Metal. You’re one of the most active death metal bands coming from Spain and you’re back with your fourth album, “Hold Back The Dawn”, that will talk about more in depth next but now I would like to start this interview by asking how is it to get a career in death metal for more than ten years in Spain? What were the main challenges you faced over the years?

Julkarn – Hi there! Well, I guess it’s as difficult as anywhere else, maybe with the added difficulty that Spain has never been a Metal haven, to put it that way. Gear in Spain is expensive, rehearsal places are hard to come by, there is very little Metal related activity compared to other countries…. So yes, some roadblocks in the way, but in the end it’s the same as everywhere else. You keep going for it and hitting the same brick wall again until it starts to break, that’s when you know you have to try harder.

“Hold Back The Dawn” is a great death metal and more than that is a great sounding death metal record. You were the producer and also did the mix. Since you have long experience in this department, that was a no-brainer choice, right? You’re not at that point where you feel you need some outside set of ears fo the equation, right?

Javi – I always took care of all our recordings, even in the old days when my skills where a lot more limited. I always say the same; next time if the budget allows it I will look for an outside set of ears but in the end I’m always in charge of the recording and mixing stages. In the last couple of records I decided to hire a mastering engineer, I realized I was a bit burnt out at that final stage of the production process which I think helped those last 2 records to go one step further. Since our sound is so old fashioned, it is difficult to trust any modern studio these days, most of them would not understand what’s our goal as far as production and general sound approach.

You play classic death metal that one cannot trace exactly where to, influences concerned. There’s obvious swedish ones but I’m curious to know if there’s some that might surprise some fans. For instance, is there some spanish band that might have influenced your sound overall or “Hold Back The Dawn” particulary?

Julkarn – I think the main “secret” to Graveyard’s music is that we never hid our influences and those are mainly rooted in classic Heavy Metal. We love Death Metal and grew up listening to all the classic stuff, but it’s true that after all the years we might not listen to Autopsy or Benediction as often as twenty years ago, to put a couple of examples. And we always end up going back to the same judas Priest, Running Wild or Dokken albums. So I guess it’s the combination of both worlds, our memories of the classic Death Metal we grew up listening to plus the classic Metal we have always listened to, that’s where I think Graveyard’s sound comes from. As for Spanish bands, I’d say Barón Rojo is a huge influence for us.

“Hold Back The Dawn” is a third part of a planned tetralogy based on H.P. Lovecraft’s work. When you’ve release “The Sea Grave” back in 2013, when and where this concept began, did you already had planned what you wanted to focus on all the albums? Or is it something you are building step by step?

Julkarn – I definitely had the tetralogy in mind when we started writing “The Sea Grave”. I knew it would be a really long and hard work to structure everything to fit four albums but the idea was too attractive to not to be explored. So, yes, our three last albums have been thoroughly planned to work as a parts of a whole concept, each of them with its own character and personality, but always fitting their own part in the whole story.

Being on a series of concept albums, do you feel that that may limit your criativity somehow? And does the concept influenced the music itself?

Julkarn – On the contrary, we have found that working this way actually helps our creativity in ways we didn’t now were possible. The process works this way: I come up with the general idea of the album, which might be something really undefined, something like “the forest, swamps, voodoo, the forces of nature, secret cults in the bayou…”, so I transmit these ideas to the other guys and that sets a general feeling  for the music, a mental image, if you wish, that affects and sets the mood for everything we do. So, yes, the music, as well as the lyrics and the artwork, are greatly influenced by these general frameworks we decide to fit our work to. It’s a very weird way of working, but very rewarding.

You’re really active in the underground, but it seems that you take different approaches between the albums and splits and Eps. Is this correct? Is the format of Split and Eps important to maintain the underground vibe alive?

Julkarn – We love 7’’ splits and EPs, of course. Those are the true essence of the underground. And we would love to record even more 7’’ and EP’s but time is a huge factor here and all of us having normal works and families makes more difficult every time to get together and work on those formats. But we have not forgotten them, we look forward to be able to record some stuff to be released as splits or EPs in the future.

Feedbackwise, how have been the reactions to the album?

Julkarn – So far the feedback has been excellent, truly awesome. We kind of knew we had recorded a decent album with “Hold Back the Dawn”, but the response has been overwhelming, we are truly humbled. Having people react to our own music the same way we reacted to the classic Death Metal albums is an unbelievable experience. We are truly honoured.

Any plans to go on road extensively? And if so, being Portugal so close… any chance a visit?

Javi – We played Barroselas Festival back in 2008, I think it was our third show ever but it was long time ago. We always talk about coming back to Portugal but it never happens for any reason. Next summer we should play a couple of galician festivals, I think it will be time to come to Portugal finally.

“Madre De La Noche” has a eerie hidden solo on the end, can you tell us more about it?

Julkarn – It’s funny that you mention that particular solo because I did record that one, and I’m the bassist… We always share bass and guitar work in the studio, so some bass tracks you might listen on an album were recorded by Javi or by me, a rhythm track might be Carlos or even Gusi and usually, Javi Carlos and me share the solo work. As for that specific solo, being a epic Heavy Metal inspired riff, I tried to go for a classic Candlemass / Manilla Road kind of lead guitar. It was mostly improvised and I seem to remember that the recorded version is the first or second take… I know for sure I didn’t succeed in replicating my heroes, but the end result is cool anyways so, there it is…

Javi – I think Julkarn didn’t get the question… You mean the hidden track at the end of “Madre de la Noche” right? Julkarn was talking about the last guitar solo in the song “Madre de la Noche” which was recorded by him actually. That hidden track is called “Strange Fruit”, it is a Billie Holiday track covered by many artists during the last few decades. Since the whole album has this swamp/vodoo/african rituals… vibe, we thought this song would fit perfectly even if it has nothing to do with Death Metal at all.

What would the greatest achievement that you would have for “Hold Back The Dawn” bring to you?

Javi – I think this album got us the best reviews ever and people agree this is the first one we really sound a bit “different” and “personal”. We haven’t reinvented the wheel but at least we finally found our way of expression as far as music ideas. I’m pretty sure in the future people will see the difference between the first 3 Graveyard albums and the next ones and “Hold Back the Dawn” is the bridge between both worlds.