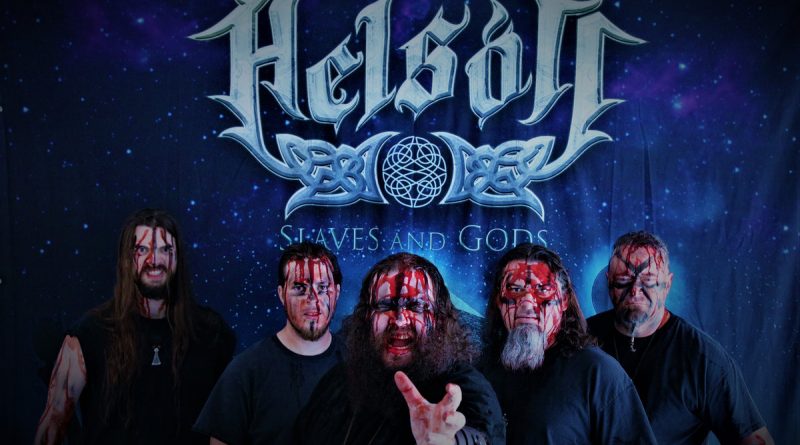 Helsótt was one of 2018’s good surprises in the extreme folk metal realm and when the opportunity arose to talk with them, we didn’t let it go. This one took awhile to be done, nevertheless it’s here now and we present it to you, Eric Dow from Helsótt

Hello guys and welcome to our World Of Metal. And welcome back with your second album, “Slaves And Gods” that kicks some serious butt. Since it was release awhile, right now you must have some more final idea of what was the reaction to the album by the media and by the fans.

Hello, thank you for taking some time with us.  The overall fan reaction for “Slaves and Gods” has been amazing.  Our reviews have been 50/50.  We are a very polorizing band and we do things our way.  A lot people in the world don’t relate to our style of music fully.  The reason for that seems to be that we are too diverse.  We have too many different influences in our music.  I think that we write music for people who have an open mind, and those type of people generally love our music.

Before you started writing “Slave And Gods” did you had any clear intention of what you’ve wanted to achieve?

Yes, absolutely.  Things change and we were hit with a very difficult challenge with “Slaves and Gods”.  When we entered the studio to record it our guitar player texted us and told us he was quitting the band and that he was taking the songs he had written with him.  So, Cooper and I wrote some stuff on the fly in the studio and brought back some older songs that were not intended for this album.  We asked a bunch of our friends to help us finish the album which is why there are so many guest performances on it.  With the help from our friends world wide and the intensity in which the album was recorded I feel like it turned out 100 times better than it was originally written.  “Slaves and Gods” truly represents the love of pagan/folk metal world wide.

You’ve got a ton of special appearances on the album. How all of that came to be? It just flowed that way?

I was going to ask Trollmannen and Masha to do guest vocals on the album originally.  That was going to be the extent of the guests on the album.  But as previously mentioned we ended up asking a bunch of our friends to help complete the album.

You’ve suffered some line-up changes even when you were recording the album. That can be a real blow on a band’s aspiration, specially to find the right replacement. How was it in your case?

I have been dealing with lineup changes in this band since the very beginning.  It never changes my direction or my vision for the band.  This is a labor of love.  It’s not for everybody.  We don’t make any money, and it is very expensive to be in a touring band.  So we usually lose band members directly after we have toured.  It’s just not for everybody and you never realize just how difficult touring is until you’ve done it.  It takes a special kind of crazy to do this and make no money at it.  I’m that kind of crazy.

In that sense, I have to mention the way “Doc” entered the band, that feels that in a way all fits together in the end. Was it a no-brainer choice for him to play the bass? If I’m correct, he didn’t play bass in the album right?

That is correct.  He hasn’t even been playing bass for a year yet.  It wasn’t a no brainer at all to have him join the band.  If anything it was a big risk.  It took one major drunken discussion to get the ball rolling with the idea and then we had many serious conversations afterward to see if it was really a possibility.  For me, I never wanted Doc to feel regret for spending less time in the Hospital and with his family.  But he has done things in a way that a lot of people should these days.  He has secured his future financially with decades of hard work and now he is living his dream to perform on stage without that overwhelming financial stress that most musicians have.  He has taken the bull by the horns and has grown so much over the last year as a bass player and entertainer.

The album was released in October… in what respects live promotion, you’ve been busy? When can we expect an invasion in Europe by you guys?

Since the release of the album we have done a west coast US tour with Korpiklaani, and Arkona.  We have played a San Diego show in support of The 3 Tremors first US tour.  We have played the Wacken Winter Nights festival in Germany, and the Cernunnos Pagan Fest in France.  We are preparing for a 4 day tour with Ashes of Ares and are looking to get back to Europe by the end of the year. 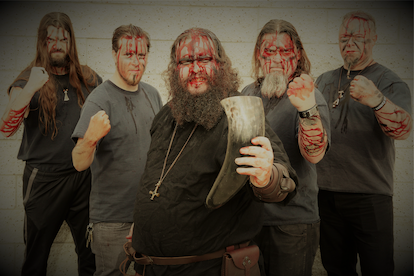 The U.S.A. isn’t the more expected destination to have a folk/pagan metal band. I bet that is something you hear a lot… Where do your major influences came from? If you’ll had to point out, what would you say that were Helsott’s primal inspiration?

I hear it everywhere were go outside of North America.  I hear it in every review and every interview I do outside of North America.  It seems like North Americans are the only people not surprised that there are Pagan/Folk bands in the US and Canada.  For me, paganism is a world wide culture shock.  I don’t understand why people think that you have to be European to be inspired by the history of paganism.  Pagan is a term brought forth by Christians as an insult to anyone who does not believe in Christ.  Not just Vikings, Goths, and Celts.  So I feel like the rest of the world could really use the eye opening experience that is Helsott.  We don’t just sing about Vikings, Goths, and Celts.  We sing about Serbs, Egyptians, Vandals, Athiests, Voodoo, American Indians…  I could go on and on.  All of which fall under the “Pagan” or “Heathen” labels.  That is my primal inspiration.  To go to the places of the world who think that they own paganism and have the narrow mind that you can’t be in a pagan band if you live in California, and show them exactly what Helsótt is all about.  9 times out of 10 we will change your mind and that gives me the biggest rush, the greatest feeling of accomplishment.  Music is life and Helsott is my music and I am very proud of it. Our major influences come from Iron Maiden, Therion, Virgin Steele, Cannibal Corpse, Amon Amarth, Moonsorrow, Ensiferum, Turisas, Pantera, Dimmu Borgir, Borknagar, and bands like that.

I can’t help mention the fantastic cover you guys made of the Tom Petty classic “Runnin’ Down The Dream”, not a usual choice but it did workd out great. Why this choice and did you had any others in mind?

We love music so much.  There are thousands of covers I would love to do.  It is so hard to narrow down to one song that you want to cover.  Tom Petty is a huge inspiration to me and that was a no brainer to cover one of his songs.  Which one was the hard decision.  After much thought I felt like “Runnin’” would be the perfect song to rock out to and tweak a little bit with a violin and a lower tuning.  I love how it turned out and we have been getting great response from that cover.

What’s next? I know that’s still early and that you had four years of interval between albums but do you know if it will take so much time for the next one? And do you have any plans or ideas where you want to go next?

I have already written the story for the next album.  It will be a concept/story that will represent who we are and where we come from better than the past albums.  We are hoping to finish the writing of the album this year and get it recorded and released by the end of next year.  If we get more touring offers then we will definitely take those opportunities and the album might not be released until 2021 but it won’t be any longer than that.  And I must add I am very excited about the next one.