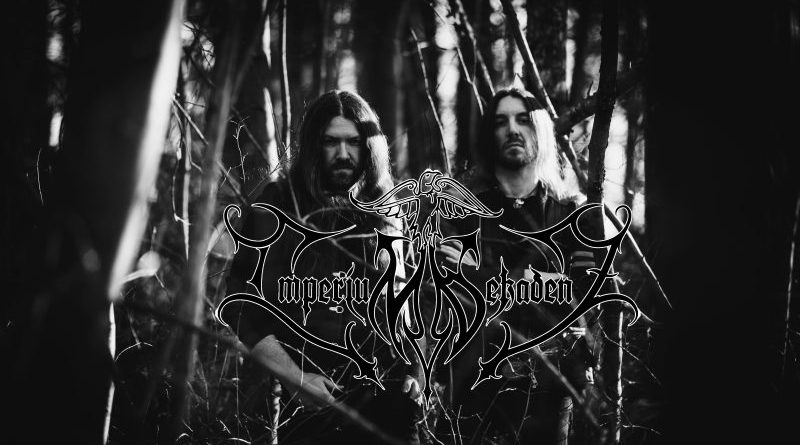 Imperium Dekadenz is bringing a fresh breath to black metal since 2006, when they released their debut album, “…Und Die Welt Ward Kalt Und Leer”. Now thirteen years later, the duo is releasing their sixth album, “When We Are Forgottern”, a true masterpiece that prooves that the band is evolving to brilliance by each album released. World Of Metal reached out for Horaz (vocalist, guitar and keyboard player), to talk about the new opus. – By Fernando Ferreira, photo by Void Revelations

Hello guys and welcome to our World Of Metal! I have to start to say that I felt that “When We Are Forgotten” is your most ambitious album that you made. More ambitious, more dynamic, more epic, more atmospheric… Do you agree?

Most ambitious indeed, dynamic and atmospheric too, but it was one of our goals to be less epic than on “Dis Manibvs” and with no more historical backgrounds in the lyrics. We used less riffs in a song and formed the composition more compact. In addition, the overall atmosphere in the songs remains similar which gave us the possibility to create a higher contrast between the songs. In our opinion it is less exhausting to listen to the whole album and still is keeping an epic impression of the whole work.

After such a great work like “Dis Manibvs”, what was the objective for this new album? When did the it start to form on your minds?

We wanted a darker and more intimate album with more relations to our personal experiences, dreams and philosophy of life. I think the idea of the new songwriting concept started already in 2017 and become flesh in the mid-summer of last year.

Can we say that “When We Are Forgotten” is a concept album?

We would say no, if you compare it with ‘Dis Manibvs’ or ‘Meadows of Nostalgia’. You can put many ideas in the title ‘When we are forgotten’ that deal with topics like life and death. So all songs make you thinking about those aspects and you can call it a concept album if you are open minded enough to find connections.

Lyrically, what was the main inspiration for “When We Are Forgotten”?

Our personal experiences, dreams and philosophy of life as mentioned earlier. There are topics were we spent much time to find answers for ourselfes or events that have greatly influenced us and made us think. ‘Absenz Elysium’ for example made us think about how far worldly striving makes sense taking into account death and its finiteness. Or ‘Transcendence’ describes the development towards the realization that true fulfillment can only be found off the beaten tracks…

Did you find any boundary that you felt that you couldn’t or wouldn’t cross when you were writing the new album? Creatively I mean.

Well the boundary are we, Vespasian and Horaz. Each of us has his own ideas and concepts, which only find their way onto the album if both of us are convinced of it.

What are the expections for the reactions from the fans? Is that something that takes impact on you?

Sure. We don’t make the music just for ourselves. There is already a certain obligation, but ‘Imperium Dekadenz’ is and remains authentic art with the goal of materializing our passion, longings and ideals.

How do you think these new songs will sound live? Eager to play them?

That’s exactly what we’re working on right now and you can be sure that we will do everything we can to create the atmosphere of the songs on stage as you experience them on the album.

What are the plans for that front? Can we expect an european tour? Where will you expect to go this time?

Currently it doesn’t look like there will be such a tour in the next 6 months, but now finally concerts in Spain and England. But if we would get a good offer next year, everything would be possible.

The core of the band is still you two, but did you ever felt tempted to have in the studio the full band? Or in the writing process?

No, a wise man said never change a running system. We have a great workflow and there is a blind understanding between us. I wouldn’t say that there are no conflicts, but we found constructive solutions to problems that are very emotional.

Nowadays it seems that is easier to see more adventurous works within the black metal realm than when you’ve started with Imperium Dekadenz. How do you see the genre now and how would you compare it how it was back in the day, 2004?

Not only the style and genre changed, also the way how bands promote themselves and also the possibilities to make good quality recordings with equipment that only costs a fraction of the price we had 15 years ago. All these fators led to a real explosion of bands, ideas and projects. You can find new interesting bands everyday, but it became very hard for a band to be heard by many peoples. One aspect never changed: You can only find satisfaction in art if success is not your most important goal, but self-realization.