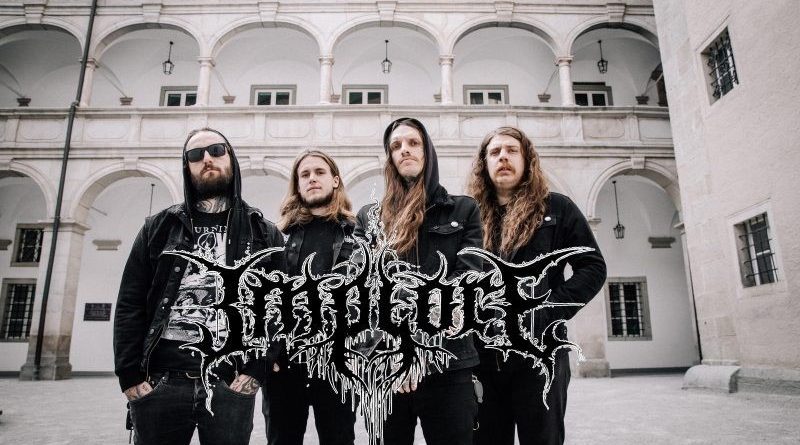 Implore is just one of the great outfits extreme music has to offer, gathering elements from death to black metal, not forgetting that grind/crust vibe that we could recognize anywhere. The band is back for its third album, and, of course, World Of Metal had to check out what to expect, although we expect to be rammed dow by “Alienated Despair”. Carol Lieb, the new bass player for the international band talked with us. – By Fernando Ferreira

Hello Carol and welcome to our World Of Metal! And welcome back with your third album! How is the mood in the band now that the time is near for “Alienated Despair” to be out?

Hello to you too and thank you for the questions! We’re super stoked about it! not only about the record being released but also about all the tours that come with it. We’re totally happy with the outcome and excited to bring all those new songs on stage.

You’ve some kind of line-up revolution with changes and a new face added to the fold. Can you walk us through these changes and also tell us how big of an impact it had on this new set of songs?

At the end of the “Subjugate” touring cycle Guido decided to leave the band after almost two years of intense touring. The guys didn’t want to stop writing new songs so Markus (who played guitar back then) switched to drums until they would find a replacement. I live in a flat with Markus (and now Gabbo as well) and the guys hung out at our place a lot. Knowing that I played bass in bands they asked me to join one day and since we were friends already we just clicked immediately. So Markus stayed behind the drums, Gabbo is only doing vocals now and even though we have to work with one guitar less it feels more like two steps forward than a step back.

The first contact I had with Implore was on the great show you guys gave on Vagos Metal Fest, back in 2017 – and only after that I heard “Subjugate”, that was your first album with Century Media. Being a DIY band, how was that experience of having powerful label supporting you?

It’s awesome. they give us our free space and will while taking the best care of us in terms of advice, organization, preparation, production, getting our stuff out into the world and by being super nice people on top of all that.

“Alienated Despair” doesn’t feel more relaxed… at all! It shows a pissed off band, ready to explode! Is reality still the best inspiration for such angry music?

Look around, man. Now is about the best time to be pissed off and it doesn’t seem to change anytime soon. and we’re trying to channel that anger and release it with the only thing we’re good at.

One can see a thread connecting all songs and the album title. It seems like the center is modern society and its power to disconnect people and isolate them/us more and more… the more we advance in technological ways, the more we are alone and less empathetic with each other. Do you agree that this a topic that reflects the spirit of the album?

It definitely is one of the many topics we and especially Gabbo wanted to focus on on this record, if not the main one. We’re numbing ourselves by blindly obeying an invisible hand that puts more and more weight on our shoulders and everybody has a different way of coping with that. Whatever this weight may be for each and everyone of us. This time the lyrics are written from a first-person point of view so that people can hopefully identify with it a little more, or maybe try to find a way out of their desperation, their loneliness, their anger, or at least know that they’re not alone in this giant pile of shit society is causing and forcing us to live in.

Soundwise, you still have that gritty and raw look that brings back memories of swedish death metal and even crust. This kind of sound already is your trademark and you don’t intend to deviate from it, right? Tell us more about the recording and production works on “Alienated Despair”.

We are angry and loud and we tried to not only put that into our songs but also into our sound. I think the whole process was pretty intuitive and therefore fast and straight forward. We wrote a bunch of songs without thinking too much about how they would or should fit or sound on the record. Petro (guitar) wrote most of the songs and I jumped in with a few songs and parts as soon as I figured out in what direction we were heading. We hardly changed or rewrote anything and took most of those songs into our friend Paul’s Deer in the Headlight Studio in Austria where Markus (drummer), our soundguy Yoshi (whom we actually consider as our 5th member) and Paul did a really great job in finding the right tools to make this record sound exactly the way we wanted it to sound. We had a lot of time in and also outside of the studio, so we really focused on the details. Also having Gabbo only doing vocals gave us some new territory to explore and play around with, which unintentionally or deliberately changed the structure of some of the songs almost completely.

You’ve released so far albums with a two year gap, like clockwork. And you’ve also been growing each release. Would you prolong this gap if the demand to play live also grows or putting new music out regularly is more important? What brings more gratification to you? Writing or playing live?

I think there’s not one without the other. We live to play live but also love to push our own and each others limits and work on new stuff. I think growth is a pretty accurate word and as long as we – and everything that comes and goes with or from it – grow we won’t stop doing both. If we want to keep this machine rolling we are aware that we need to put out music regularly not to lose the attention of our followers or new potential followers, so I think we will keep putting out music in a regular way like we’ve been doing so far.

Talking about playing live, what are the plans you’ve been plotting for the next months? Any idea where you can go?

Touring the fuck out of this record! Gabbo and Ghost Trail Booking are working on a lot of tours right now, like mainland Europe, Scandinavia, Asia, Canada and the US. we’re setting ourselves short-term goals and try to keep the band busy so I think that’s really just the beginning.

To finish off this interview, what would think will come first, the climatic changes wipe out mankind or rather will do it ourselves by our own hands?

That’s also a thing that goes hand in hand. Men will inevitably be the death of mankind, no matter if we force this planet to take revenge on us or kill each other over some stupid ideals we’re brainwashed into believing. I think we all could save ourselves if we act right now, but human kind has always proven to be too egoistic and/or stupid to take a step back for the greater good. On the other hand, we punished this planet long enough, so maybe it’s time to wipe ourselves out and give it the peace it deserves.