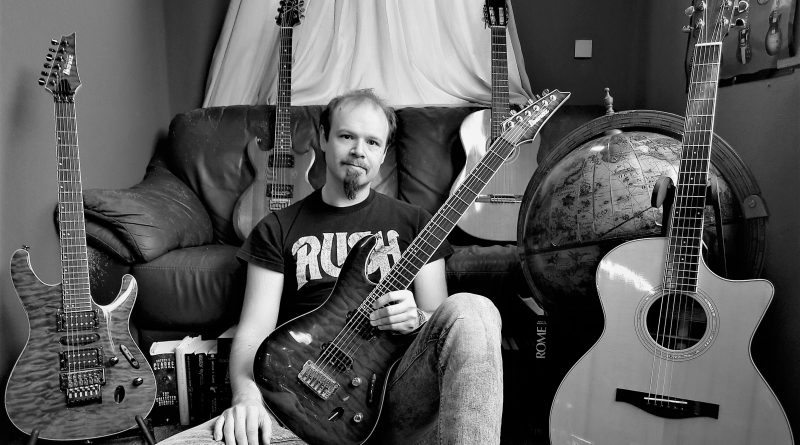 In Motion is Tom Tee‘s newest endeovor, whom you might now from bands like Thorium, Ostrogoth, among others. Through the years, Tom has collected a number of songs that he’s been working on his own. As the number of songs is so high, he had the need to create not one but two projects – one more melodic, Entering Polaris, and In Motion, where he can go deep on his more extreme metal tastes, focusing on death metal and melodic death metal. Working with lots of vocalists around the world, “Thriving Force” is the result of Tom’s vision for In Motion, which we all loved over here. So this was a no-brainer, we had to get in touch with Tom to know about him, and of course, In Motion.
Fernando Ferreira 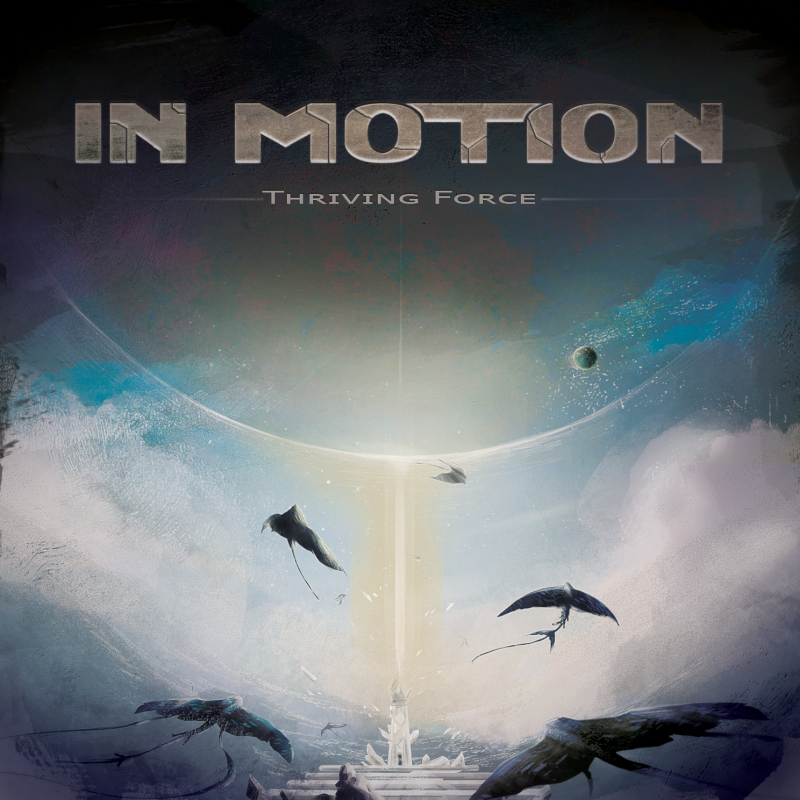 Hello Tom and welcome to our World Of Metal! “Thriving Force” is a more than appropriate album title as In Motion has a sound that keeps on growing inside the listener. Is this also the way that you feel the music?

Oh yes, absolutely! I love it when an album takes you along several unexpected detours and presents you with a few songs or elements that you weren’t expecting. In the past, bands did that a lot more on albums – think of groups like Rush, Queen, or even Maiden and Metallica, to name a few. I especially love it when an album ‘grows’ on you over time – it’s a testament to a lasting value. For me, a record or a band is particularly interesting when no one, single song is representative for the whole, and you need to listen to multiple tracks to really get a feel for all the things the artist is doing. I love the classic Iron Maiden formula for an album – there’ll be a few catchy, ‘single-worthy’ songs, one or two slightly more experimental tracks that take a few listens, and a big epic where the band truly lets go and takes you along the scenic route. Variation is key.

How did it all began for In Motion?

In Motion is the slightly heavier sister-album of Entering Polaris: that one was released last year and also featured a lot of my favourite vocalists, though more in the Prog/Power Metal genre. I like all sorts of Rock and Metal, and I’m always writing songs and albums. By the way: for those curious about what else I brew up, I’d say check out some of the other bands and projects I’m a part of, such as Thorium (classic Heavy Metal from Belgium!) or 23 Acez (catchy, heavy Rock). I simply love writing music and lyrics, so I’m always planning ahead and am always working on new stuff, constantly! 🙂  In Motion is one of those outlets, where this time I wanted to explore the heavier, slightly more modern side of Metal and write music in the vein of artists like Gojira or Devin Townsend.

You’ve had a great number of guests on “Thriving Force”. Was it a no-brainer to choose them? Did you contact them knowing what were the songs on which they would sing?

I try to plan that well in advance indeed: after the songs are written and I’ve done the vocal pilots, I have an idea of what sorts of voices would work for certain tracks and for certain parts, and then I try to imagine vocalists that I know and like singing those parts. A sort of Christmas-list starts to develop for who I’d love to have on there, and then I start drawing up e-mails and looking up contact information; that’s about it!

Who wrote the lyrics for the songs? Did you wrote them or did each vocalist write their own lyrics?

I absolutely adore writing lyrics, so I write them all indeed. When I was little, I always wanted to be a writer. I’ve always loved reading – especially Science Fiction of any and all kinds; classic novels, old books and poems, that kind of thing – and I’m totally addicted to writing up stories and settings and then trying to paint the musical scenery that will serve as a background for that particular story, concept or idea. That’s how most of the songs originate; everything flows from that.

What’s your favourite collaboration for this album?

That’s a hard one to choose… I’m immensely thankful and proud to have all these awesome guests on this album, and on the Entering Polaris record as well, so picking just one or two would be difficult. I do have to say that one of the things I’m most proud of, is that there’s a number of singers on both the Entering Polaris record and the In Motion album that usually don’t do guest appearances. To have them say ‘yes’ to this and to hear them on there, is mindblowing to me! 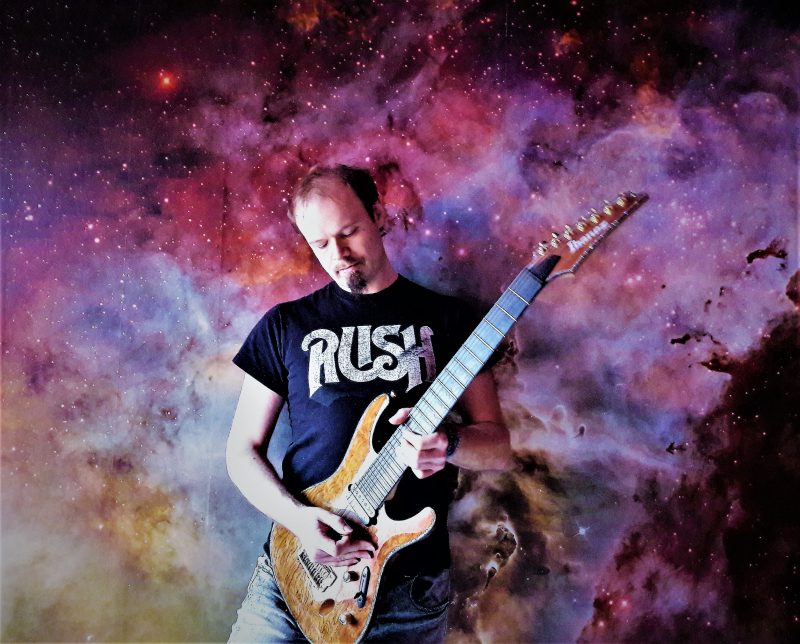 How about Entering Polaris, what can you tell us more about that set of songs?

Entering Polaris is the more melodic, proggy side of me. The concept for the debut album there was the same as for In Motion – nine tracks, with vocals done by people I love to hear, with plenty of variation, instrumental passages, proggy stuff, big choruses, and big concepts as far as the lyrics are concerned. Polaris ranges from Power Metal to some thrashy and modern stuff, to Progressive Metal and Prog Rock, and features vocals by members of Soilwork, Therion, Subsignal/Sieges Even, Balance of Power, Anubis Gate, Serenity and others. The album was released in June last year, so I’d say check it out and see if it’s your thing!

Do you envision playing live with both projects? Something special, a one-time thing?

That’s a very interesting question, and I’ve thought about the same thing too… I’d love to do something like that at some point – take the best of both projects and do a nice, possibly one-time thing or a small tour with some great guest vocalists and players, and make it cool and spectacular. The truth is, though, that the music at this point just isn’t well-known enough (yet?) to really make that worthwhile. It would take a lot of planning, a lot of work, and a lot of money to make something like that happen, and I’m afraid there’s just not a big enough fanbase now to justify it. Maybe in the future, after a few more albums…?

You’re still writing, as far as we know, for these two projects. Now that you have a selection for both projects, is there the tendency to try and fit the style of the two albums already written? Or do you try to write what you feel right and then try to see where it can fit in?

I’m indeed writing the follow-ups as we speak – in fact, they’re almost written at this point, and I’m heading into the studio this summer to start tracking the next few records! 🙂  The general approach to the writing process is to do what I always do: just write what comes to mind and work on it ‘til it feels right, and to release it, without worrying too much about what might fit certain stylistic expectations. There should never be a limit set on creative ideas and the flow of new material, no matter how much ‘out-of-the-box’ it might sometimes turn out to be.

Who would you like to work on these two projects?

Well, remember that Christmas-list I mentioned earlier…? There’s definitely a big one developing for the follow-up records as we speak – though I would definitely love to work with a few of the singers who appeared on the first Entering Polaris and In Motion records again as well. Only one thing’s for certain already, and that’s the fact that I’d love to put the re-amping, mixing and mastering in the expert hands of Simone Mularoni again! He did the sound on all four of the albums I did (or was part of) this year, namely Entering Polaris, In Motion, the third 23 Acez album and the debut album by Thorium, and I totally adore the result each and every time…