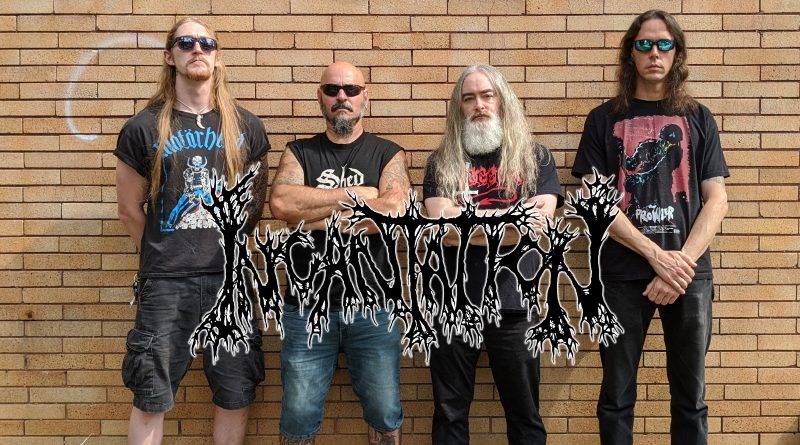 Incantation is one of the most influential american death metal bands ever. Let’s start by that. Although they had never reached the heights of popularity as some of their peers, their never ceased to bring to the underground pearls like “Mortal Throne Of Nazarene” or “Vanquish In Vengeance”. Now they have a new opus out, “Sect of Vile Divinities”, and its quality shows that they are at their be(a)st. World of Metal went to have a little chat with John McEntee (vocals and guitar) and Chuck Sherwood (bass). Step down below to the underground with Incantation.

Hello guys and welcome to our World Of Metal. New Incantation album out in a time that bands in general are facing difficult times. Before focusing on “Sect Of Vile Divinities”, I have to ask, how did the corona virus pandemic affected your plans for this new album? Was the album done when all this crisis happened?

John – We finished the album in late December 2019. So we have basically been sitting on the album for about six months. Once the Covid-19 situation became an issue for a few months I think Relapse was trying to assess the situation to see when the best time is to release the album. The album release was delayed a little bit because of the virus, but it’s okay we’re just happy to have it be coming out in August.

Overall we were expecting the first part of 2020 to be kind of slow touring wise. But we did have to postpone our performance at Oblivion Fest in Austin Texas. Along with are summer European Fest schedule. Also, the Quebec death fest got postponed until 2021. At the moment we are scheduled to go out with Belphegor in Europe in November, fingers crossed this will still happen.

When a band releases an album, is it odd for you to release this new set of songs and not being able to play it live? How deep was Incantation affected with the impossibility of having live shows?

John – The situation is a bummer. We were planning on playing “Propitiation” for the Summer festivals in Europe. But it’s okay we’ll just have to wait to play live a little longer than we prefer.

It definitely affects all of us not being able to play shows. But there’s nothing we can do about it and all other bands are in the same boat as us. We are all hungry to get on the road and kick some ass playing for all the diehard metalheads.

For now we already know to expect, good and old school death metal, dynamic with some fast parts as also some doomy sections. Did you had any plans of what “Sect Of Vile Divinities” should sound like? Were there any ideas that you felt weren’t good enough to fit the album?

John – Yes I guess there’s always a point in the writing process where you to realize what the theme of the album is. We knew we wanted a lot more feeling and have a darker sound on this album than its predecessor. There were two songs the band wrote for the album that just weren’t working. We spent a lot of time trying to see how they fit the big picture. But in the end, we had to make a difficult decision to leave those tracks off to preserve the integrity of the album. And it definitely was the right decision.

I’m going to ask you a difficult question, out of fan curiosity but if you were to place it in a ranking, in Incantation’s own discography, where would you put this one? For me I have to admit is way up there among “Mortal Throne Of Nazarene”.

John – Wow that’s awesome to hear I’m happy you ranked it so high. Honestly it’s always very difficult to rank our albums because they all hold a very special place in my heart and they preserve part of my history and time. It’s natural that we feel very excited about the new album and we are very proud of how much hard work we put into it. “Sect of Vile Divinities” ended up coming out just the way we wanted it to. It’s very rewarding to be able to have your musical expression translate properly onto a recording.

Can we say that this album is a kind of a concept album, with each song representing one evil divinity? What came first, the concept for each song or the music?

Chuck – Not entirely, each song is its own idea. The only thing conceptual is the entities and deities mentioned in the album are assembled in a sort of forgotten temple as a common “sect”. As the cover portrays. All of them sharing the same “vile” nature against opposing religions (or religious ethics) and humanity’s failure.

Each phase musically alters as we listen and edit accordingly, likewise with the lyrical content. We tend to write them independent of one another, till they merge at final stages to what you hear on each album. There are times I can have the whole of an album’s lyrics done before our first song is in its “skeletal” phase. This is a tried and true formula that works best for us all.

I heard something that Sonny is not in the band anymore, can you share with us what happened and do you already have a replacement for him?

John – Yes, before the end of the recording Sonny decided to leave the band. From my perception I think he felt like his musical expression wasn’t being utilized to his fullest potential. It was evident at a certain point during the recording that we were just on different pages. I know for myself I never want to feel like I’m holding anybody back musically. Sonny is an amazingly talented guitar player and I understand that he wants to play and record music that he can utilize his talent to the fullest extent. In other words, he’s way too talented to play with Incantation. He left on good terms and we definitely support him in his future endeavors. We appreciate his hard work he put into the band. And we all became better players from jamming with him.

Yes we do have a new guitar player now his name is Luke Shively, he has been jamming with us live for five years now on and off. He would be filling in on bass when Chuck wasn’t able to tour with us because of work. So we already knew that we can get along with Luke really well. He is an amazingly talented guitar player and really great to be around. We are totally stoked to have him a part of the gang.

This whole phase is completely new to everybody and bands, promoters and labels are trying to adapt any way they can. What do you feel about these different options to do “live” stream shows, do you think it’s a viable option?

John – Well yes it’s strange times indeed. I think live streaming is a good substitute for live shows in this strange situation. But it’s never going to be a replacement for live music. But in a way, watching a band stream has its own charm to it. I know for myself I really look forward to going to a live venue and feeling the power of metal come out of the PA and kick my butt.

On other note, you’ve released the debut album with Beast Of Revelation. How was it? Was it refreshing to make music in a different way and approach like the one in Incantation?

John – Yes the Beast of Revelation project has been a blast to be a part of. I was honored to be asked to do vocals for the band. AJ and Bob have been good friends for a while now so I know it would be something I would enjoy doing. Honestly when I heard the final mix of the album it exceeded my expectations. I really think AJ nailed the production just perfectly. And I’m very pleased about how he mixed in my vocals to complement the music so well. If you are into death doom I advise you to check it out.

Since now bands and musicians were forced to stay at home, was there urge to make new music to pass time? In your case that you had a new album already ready that must have been definitely weird.

John – Well I’m pretty much a homebody when I’m not on tour. So I really enjoy the time at home. In 2019 I move to North Carolina, so it gave me time to settle in.

As for songwriting, it’s very common for me to be extremely inspired to write new music after finishing an album. It’s always kind of been that way for me. It’s kind of like the ideas for songs don’t stop after an album is finished. I really enjoy writing music so I would’ve written a lot of music with or without the pandemic. As a band we all just feel extremely inspired to write.