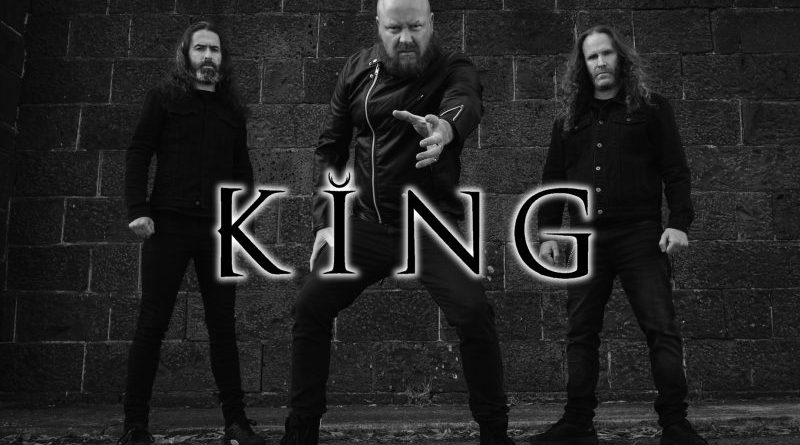 Australia often proves to be a land full of inspiration when it comes to music, be it metal or not. Recently we had the chance to interview one of those bands that may seem small at the distance but more closely are full of creative depth: King. Focused both on the epic and darker side of Nature and Man, 3 years after the release of their debut album, this band presents their most recent adventure: “Coldest of Cold”, an adventure hazardous both to spirit and body. After talking with Dave Hill, the guitarist of this band, we managed to get a quick inside look on the ways the band managed to create such a good piece as well as the their beginnings and how their different backgrounds (both current and past) relate to the their creative project as a band. by Matias Melim

So, to start off this interview, how and when did this band start forming itself?

King first started in 2012/13 . Tony Forde (Vocals) and myself (Guitar) had mainly been involved in grindcore/deathmetal bands for the past 20+ years, including playing in a grindcore band together from 2002 – 2013. We got talking about a new project, something different and more in the blackmetal realms as we were both big fans of the genre.  We got to work on the first few songs, and they came together well so we continued on from there and King was formed. David Haley (drums) joined around a year later, once we had some solid songs down and his drumming style worked perfectly with the songs. We also knew him from the same grindcore/deathmetal scene in Australia.

Where did the name King come from? Does it have some meaning behind it or did you guys assume it to manly due to “aesthetics”?

There is no special meaning behind the name King. Once we began writing music and the songs started to come together, the name King seemed to suit our sound! The music wasn’t pure blackmetal and had the melodic and epic edge with big choruses so King suited the style and represented our sound without locking us into a certain genre.

One quick look-through “The Metal Archives” shows that this band is formed only by veterans of the musical scene. The three of you have been in other bands and are also currently between musical projects; is King a band influenced by these other projects or do you guys find that it is an independent “brand” with its unique characteristics?

We each bring our personal influences to King, which have a long history or grindcore and deathmetal but I wouldn’t say our past bands have any influence on the music of King. It’s a totally different sound to all of our previous bands. It’s a new and challenging experience for me as a musician to write the music of King, a lot more time and effort goes into a King song than with my previous bands, there’s a deeper connection with the music for me too and a much bigger focus on the song arrangement side of things. I think I can say the same for Tony (vocals) too.

Taking into account this somewhat big number of bands in which you are involved both separately and collectively at the moment, is King considered a main project? (After making this question, I noticed how personal and polemical it may be for the band members, that being said feel free to ignore it if you don’t find it adequate and we’ll edit it out afterwards. Otherwise, we’re very curious for an answer!)

For Tony and myself it’s our main project, and has been since the start. David Haley (drums) his main project is the tech death band Psycroptic, who are often extremely busy touring the world,   but his focus returns to King when required during writing, recording or touring. This arrangement has worked well for us so far, the challenge is just planning ahead to lock in everyone’s schedules. We never rehearse together during the writing process or before recording due to everyone’s schedules but this has turned out to be an advantage for us. It keeps the music fresh to our ears and brings on new inspiration during the recording process. Sometimes I’ve found in the past it can have a negative effect when you over rehearse material and get bored or frustrated with it.

What bands would you say inspired you as a band in a whole?

I don’t think this could be summed up very easily. We all are fans of a lot of different metal styles since we were kids and all those influences for each of us is different. They all factor into influencing our own individual playing style, that when brought together creates King’s sound. In an attempt to try and some it up very generally, also on behalf of the other band members – I hope they agree (laughs) I might say some attributes we admire from current bands would be the determination in the musicianship of Satyricon, the uplifting epicness of Moonsorrow and the hooks of In Flames.

Your lyrical themes seem to be always connected with cold desolation and with a sense of prophesized adventure and triumph on an epic scale (in both albums). What are the mains sources of inspiration of your lyricist(s)? In other words, what general theme do you find represents your band?

Yes and I would also say the main themes and inspiration revolve around nature, the cosmos, introspection and also some more personal life experiences and thoughts but all woven into tales of warriors and epic battles in beautiful mountainscapes and subzero temperatures. I know Tony Forde (vocals and main lyricist) always aims to take the listener on a journey of some sort through the lyrics, weather that’s following the aftermath of a dramatic battle and a lone warrior’s journey home or reflecting within oneself on our existence and meaning within the universe.

After hearing (with enthusiasm) to the brutal journey of Coldest of Cold, where did you find the inspiration for this adventure in specific? For me, it reminded of the barbarian adventures of the mind of Robert E. Howard.

Tony Forde (vocals) wrote all the lyrics for the title track and I believe he drew inspiration from his own thoughts on life and death. A story of a warrior contemplating his existence while coming to terms with an imitate death and summoning up the will power to somehow conquer it and live on through his atoms drifting up towards the stars and out into the cold universe.
In that same line, how would you present the lyrical story of this album? I made my own analysis in the album review; however I don’t know if I have misinterpreted it due to my natural preferences on the style. So what better way to correct any possible mistakes than to ask the creators themselves! There’s defiantly some continued themes and stories from the debut album “Reclaim The Darkness” but I would say the overall the lyrics on “Coldest Of Cold” are darker, focusing more on life and death, the meaning of our existence in this cold universe.

Do you see Coldest of Cold as a continuation of the previous album or a completely separate piece?

I think it’s a natural continuation from the first album. We started writing material for “Coldest of Cold” very soon after the release of “Reclaim The Darkness” back in 2016, so you’ll definitely find some similarities in the riffs and song style there. But also as a band we naturally evolve and move forward musically, so there’s some new elements and differences on “Coldest Of Cold” too. I guess the aim when writing the album was to be a good blend of the great parts from “Reclaim the Darkness” combined with new and fresh ideas both musically and lyrically.

I really didn’t know what to expect when the first few singles came out, it’s always hard to know how fans will respond to new music. Some of our new material has elements we haven’t used before, so it could go either way but so far the response to the singles has been great!! We’re very happy with it and extremely excited to finally be able to share our new music with the world.

And to end this interview, I have already seen that you have a scheduled tour with Wolves in The Throne Room over there in Australia starting at the end of November. Are there any plans to present your most recent album with other crowds such as the European and the Americans ones? In case of an affirmative answer, remember about World of Metal and Portugal!

Yes we’re really looking forward to getting out around Australia to promote the new album with Wolves In the Throne Room. We’re definitely very interested to get over the Europe in 2020 hopefully we can get some plans locked in and continue to support “Coldest Of Cold” over there!

Well, thanks again guys for making yourselves available for this interview and on behalf of the World Of Metal team: we wish best of luck with the release of this awesome piece and with your Australian tour. And in the case you don’t appear on non-Australian stages in the near future, raise double the frosty hell with your compatriots for us!

(Laughs) Yes we will, and thanks for taking the time to listen to our new record, cheers!!!