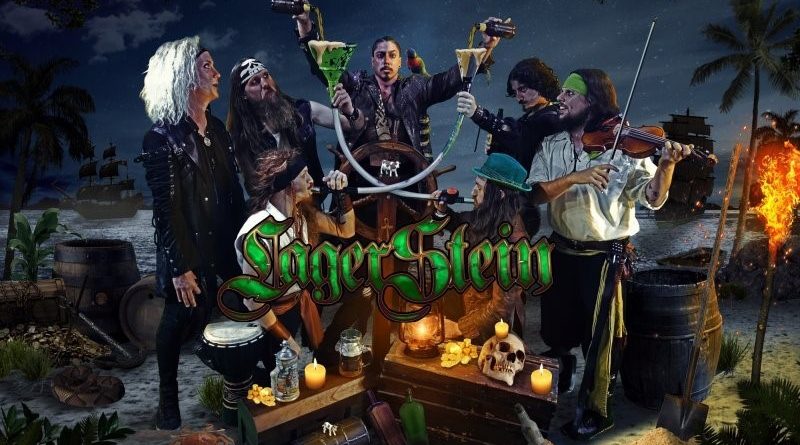 Good ol’ pirates Lagerstein came back to the shores of World Of Metal for more chaos and destruction and we were more than happy to receive them, in all our legendary well-known portuguese hospitality. The Majestic Beast was the one who invoked the law of parlay and it was even better than expected. – By Matias Melim

Hi there, thank you for making yourselves available for this interview and I say that both on behalf of World of Metal as well as on my behalf taking into account that I’ve been your fan for about 3 years, and seriously if it wasn’t for you guys I wouldn’t have finished college with all the alcohol it involved, a more healthy alternative but definitely a more boring one.

Ahoy! Thank you so much, that is incredible! I’m glad we could help make your college a bit more party! (Laughs) This is The Majestic Beast doing the interview.

Moving on to the more formal task and starting at the beginning: For the founding members of the band, how did the idea to start the band come forth? Also, was the pirate gimmick part of the original idea?

It was a sunny day in January 2010 and Neil Rummy Rackers just graduated from high school. I was playing quite frequently with a couple of heavier symphonic death metal bands but always wanted to create a project with my brother. We wanted to do something completely opposite to what my other bands were doing at the time and create the most ultimate party for onstage. We made our first beer bongs (Bongadille and Diesel) and started making some folk metal music. When we began there were only about 2 folk metal bands in Australia at the time and we just wanted to be a party folk metal band. We didn’t really have much direction at first, all we wanted to do was blend Oktoberfest mixed with viking, pirate, glam metal all thrown together. It wasn’t until a year later when our Ultralord joined, we decided we had to pick one genre to focus on. And then we became party pirates and I tell you what, we are born for this!

Being a band that has had some exits and entrances of different musicians, do you consider that Lagerstein is musically influenced by each member’s background (not limited to musical background) or do you believe the reverse, that the band maintains itself despite this flow of musicians, and instead assimilates them? I find this curious, since this new album seems very different when compared to the other two (in a very good way).

From the beginning myself and Mother Junkst have been the core writers of the band. Each album we’ve just learnt so much about song craft and learning what works well and what not so much. We just want to create absolute banger songs and take the listener on the greatest pirate adventure. We are heavily influenced by so much music, anything from classical to The Beatles to extreme black metal and everything in between. We are all just massive lovers of music. With 25/7 we just wanted to make this album next level and have spent the last 3 years writing these songs. I think we must have written around 30 songs and have selected the best 12. We are so pumped with this album and wanted to push the boundaries of going to new places where pirate metal hasn’t been before.

Talking about 25/7, the album to be released next month, what do you guys want it to be remembered by? What was the main motivation behind it?

We wanted to make this album the most party pirate adventure on disc. So the crew can listen, grab a drink with mates and have some fun! That’s what it’s all about. We love life and this adventure we are all on. We thought how can we have more fun in a day? We need a 25 hour day! So how do you get a 25 hour day? You have to sail West! It was really fun to create an album where every song leads you through our 25 hour day.

One thing that I always wondered, and that again shows in “25/7” in almost its entirety, is your capacity to deliver a product that mixes perfectly both the epic sonority and also that party/cheery aura. Is this something that comes natural to the band or is it one more step that you take into consideration and deserves its fair share of work?

The epicness comes from our background and love of symphonic death metal bands. We are just suckers for creating a big wall of sound hence why we use heavy brass, strings and are a 7 piece band. The party comes quite naturally to us, it’s who we are as people. We were always the guys who would rock up to the high school party with beer bong on shoulder, a full esky of beer and a wet sock in the morning. We live to party!

I was surprised when listening to Pina Colada Paradise because it was so different to what I’ve listened by Lagerstein, even when comparing to other more melancholic songs as German Fun Times. However, I think that you could say that about your overall evolution, a more nitid pirate/folk metal in the beginning and  more of a mixture of styles towards the present. How would you classify your music in these parameters? Is the Australian Pirate Metal still valid, or would you like to add some more characteristics to your title?

We’ve just been calling ourselves party pirates as we incorporate so many different styles within our music. Pina Colada Paradise was a really fun to make and also the most difficult song to create on the album. That song went through many evolutions. We always had the reggae verse but then it originally went into like a punkish kinda folk song. We were like the reggae bit just kicks the shit out of the rest of the song so we decided to paint the picture of ultimate paradise. I mean Pina Coladas are the tastiest cocktail in the world. It’s the first time having a guest vocalist on our album too. We were at Studio Fredman in Sweden and in the studio upstairs we met Julia Karolina Pieta, she showed us some of her recordings and we were blown away by her voice, she was the perfect fit for the song and it really complimented the track. It’s our most different track to date but its still very Lagerstein!

After displaying an amazing talent to turn good songs into truly epic music, as Party All The Time and Beer, you decided to turn your heads to your fellow countrymen Men at Work and cover one of the most iconic songs that humankind as ever heard – Down Under. Taking this into account, how much would you say, has your band been influenced by your Australian nationality/pride?

We love our home country and love putting Australian references into our lyrics. But the main reason we decided to do Down Under was because everytime we enter a bar overseas and they find out we are Australian, about 2 songs after our arrival Down Under is always played for us. It’s a great track and it was really fun to do a cover of it!

Since May, you’ve been on the Endless Rum European Tour. How has that been until now? Did you miss the European fans? Do they differ much from those back home?

The shows have been blowing our minds and the reception has been insane. Every show so far people have been cheering for encores even when being one of the first bands on performing on the day. Aaargh Festival in Germany was incredibly special, we closed the Friday night and we were literally not allowed to get offstage, people just kept wanting more. We had 3 encores and all the crew and bands up onstage doing beer bongs and shoeys with us. It was insane!! In Australia we have a really strong fanbase who know our songs inside and out. So its always special playing in front of our home crowd. Sometimes the crowd gets so loud they can’t hear us playing haha. Europe is definitely catching up though and we are gaining lots of fans every day. It’s so exciting to watch it grow over here.

In a non-binding answer, is coming to Portugal still something to be considered in the future?

We want to visit Portugal really bad, we’ve been told it’s party central! Unfortunately we didn’t get a chance to get down to Portugal or Spain on this tour due to it being a really long way for us to drive. We drive ourselves around the continent in a 9 seater van and logistically this time we couldn’t make it work.

To finalize: being one of the most relevant pirate metal bands out there, are there any thoughts you would like to share about this genre, it’s present and/or it’s future?

It’s so exciting the pirate metal community growing. There are new bands coming out every month all creating different flavours of the genre. It’s been really cool to watch the genre grow and also be able to share stages with quite a lot of them throughout Europe and in Aus. Again, I’d like to thank you for this opportunity both as journalist and as fan! Best of luck for your tour and album release, and may future years continue to have pirate metal such as yours in it! Big cheers for the interview, I hope we can drink many beers one day with you! PARTY TIMES AHOY!!