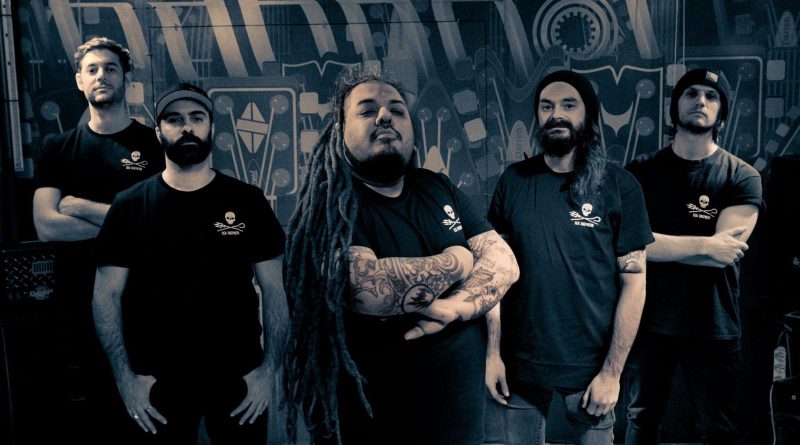 Neither is a good example of how music, good music, is really immortal. Picking on some nu-metal influences and putting it together with hardcore and LOTS of heavy weight metal elements, resulting in a great album. Straight from Italy to this World Of Metal, Neither in their own worlds

Hello guys and welcome to our World Of Metal! Congratulations for “The Abyss”! It seems to me that it is your strongest output yet, combining all your best trademarks. Proud of it?

Hi! Thanks, we are very satisfied with the result obtained, both in terms of sound and graphics. It took a lot of work and time, we had this exact kind of concept in mind and at the end we managed to achieve it.

Your sound is powerful and goes beyond any kind of trend. How would you define it? Metalcore, hardcore?

During the composition, we kept total freedom without thinking of a style or genre. In our opinion the result is a mix, as we tried to go deep into the typical hc sound while preserving our metalcore nature. We also tried to experiment by adding some deathcore parts, something new for us, but always in our style.

I love the album cover! How did you came with this idea?

We love nature and animals, and we like the idea of keeping the band image linked to this theme. Also in the previous album we used a figure of the animal world (fox) and we wanted to keep this symbolism. On this record we wanted to represent the marine depth and what better animal could have represented it than a whale? With the help of our friend and talented graphic “cikas Lab” we were able to create this amazing cover.

I find the cover quite appeals to the concept of the album. If I’m not mistaken, “The Abyss” represents the nautical term as also the human abyss, within each one of us, when we are in the face of darkness. And I think the cover has that kind of duality. When you look it can be the eye of a fish but also it can be the eye of some person. Was this something done on purpose?

Exactly, you understood perfectly the concept we wanted to express. We wanted to metaphorically represent the loneliness of people who, in the darkest hours of their life, sink into an abyss of dark thoughts. As you can feel the deep darkness of the abyss in the eye of a whale, in the human eye, in moments of despair, you can see blackness and darkness.

Still about the concept, it feels that the duality mentioned before can be applied to each song and lyrics and even to the title track, which is instrumental, it seems that there’s something talking to our inner being, besides all the nautical references. Is it intended that each listener can take his our her own interpretation of each song?

The whole album is linked by this thread. In each song we tried to keep a form of duality in meaning. The song “The Abyss” is the heart of all this. It is born as the melodic elaboration of feelings that I experienced in a particular moment of my life and, when the song was finished, we felt was so evocative it didn’t needed lyrics. So for me the song has a special meaning and I am sure that any listener can immerse in the sound and feel his own image and meaning.

The impact “The Abyss” was huge, it’s a great record. And what are the reactions you’ve been getting so far?

Thanks a lot! We are really happy you liked it. So far the reactions have been very positive, the release party was such an exciting, crowded evening, full of friends and we are still excited thinking back to that day. We had been missing from the scene for a while, coming back and finding all that warmth was unique. Currently the album is going very well and feedbacks are excellent. Promotion has just started, we will have live shows during the coming months and we hope to keep this level of response.

One of the aspects that had such a great impact in us was the fact the production is so strong. Where did you to record the album and with whom did you worked with?

The record was recorded at the Raptor Studio in Vicenza by Matteo “Ciube” Tabacco and Davide “Zeno” Zenorini members of Dufresne. It is our reference studio, we have always worked with them and we have always found ourselves at home, they are great friends and professionals. The album is entirely produced by us Neither with a feat with Gabriele Catoni from Let Them Fall. He is a friend, we love his voice and we found it perfect for “Sea Of Silence”. For the release, we have just signed with Indelirium Records and we hope to have a great collaboration with them.

We know you have plans to travel through Italy and Europe, anxious to start these set of shows? How much of the new record will you play on the stages?

Yes, really excited! We are working at some dates throughout Italy and abroad, but we don’t want to reveal too much at the moment. Keep an eye on our social pages because we will reveal more soon and also some surprises… During live promotion we will perform all the track list of “The Abyss” with also some tracks from “Neither” such as “I’m Tired Of Fighting”, “Fuck”, “This Is The Day”. We are also working on the release of two videos and you will see something in the next weeks.

We know you support the Sea Shepherd cause to protect sea wildlife. In a day and age where the human being is the main cause of suffering to all sea wildlife, how much work needs to be done to raise awareness and change our behavior??

There is so much to do, we live in an era in which nature and earth, our home, has been exploited to the point of no return. Unfortunately nowadays consumer culture and blind politics, voted only to profit, has done enormous damage to our ecosystems. Sea Shepherd is a great reality that try to change the situation, showing the world what is happening. There are also other important groups that works to increase awareness, and movements are springing up. We try to spread this important message as we can, supporting their cause and their work as much as possible.