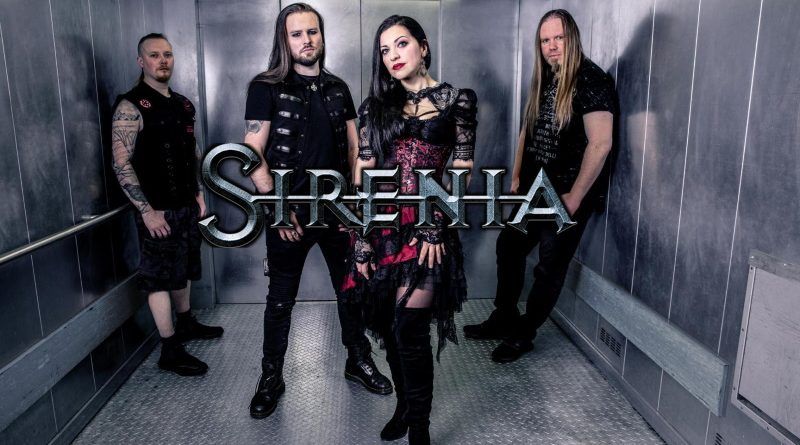 In the year that they complete twenty years in their career, there’s no better way to celebrate than with a new album. “Riddles, Ruins & Revelations” will be released on the 12th February by Napalm Records and World Of Metal took the chance to talk with eternal mastermind Morten Veland. – By Fernando Ferreira // Photo by Richelle ter Heege

Hello Morten and welcome to our World Of Metal. Great to have you here, specially because Sirenia will release soon a new album, “Riddles, Ruins & Revelations”. I would like to start by asking you what are your expections to the reaction of the new album by the fans?

It is a very diverse album, as we aim for every Sirenia album to be. I believe there should be some material on there for all the fans, whether they prefer our old material, our more recent stuff, or whether they want something new and fresh.

Sirenia is constantly evolving without betraying their identity and with “Riddles, Ruins & Revelations”, I still feel the same, despite being more modern with electronic influences. Was this natural, something that the songs were asking for or the inclusion of these elements was something that you do anyway?

Every time that I start writing material for a new album, I tend to spend the first couple of months experimenting and searching for a new direction in which I can take the album. This time I was inspired by a lot of retro keyboard sounds and electronic elements. These are elements that have been with us in the past as well, but we definitely gave them a bigger role this time. I really enjoyed making this album, and that is what it is about for me, trying to make things remain interesting. I need new motivation and inspiration every time, and I need to do new things in order to stay inspired.

This the third album with the same three letters in its title (“Dim Days Of Dolor” and “Arcane Astral Aeons”) I believe that it wasn’t an accident… can you share a light about this fact? Is it a way to mark the Emmanuelle era in the band?

Many people is wondering if there is a certain meaning behind this, whether there is a connection between the albums. But all 3 albums were written individually, without any further connection. I like album titles the cling very well, and that has a deeper meaning behind them, stuff that people needs to think about.

What was the main inspiration for these new songs? Personally it reminded lots of the old eighties songs with big powerful chorus.

I am a big fan of the eighties decade. So much great music came out of this era. I am pretty sure that it has been inspiring me for many years, at least to some extent. “R.R.R.” is probably the album that is most inspired by the eighties so to speak.

And speaking about eighties feel, I was quite surprised with the “Voyage Voyage“ originally released by Desireless. This is a song that always got on my nerves because the apathic delivery on the verses and your version really makes Emmanuelle shine, making the chorus even greater than it already was. How did you had the idea for this cover?

I have been a fan of the song since it was released back in 1986. It became a huge hit in Norway and all over Europe. I remember hearing it on the radio for the first time when I was 8 or 9 years old. I immidiately fell in love with it due to the melancholic feel there is to the song. I think this goes for a lot of the songs coming out of the eighties, a lot of minor based songs. The song stayed with me, and I actually have been playing it a lot on the tour bus in the last years. I suggested to the band that we should do a cover of it at some point. In March 2020 we were supposed to start recording the new album, but the recordings were postponed until August due to the covid 19 pandemic. I all of sudden had a lot of extra time on my hands, so I began working on the ‘Voyage voyage’ cover. In the end we were so pleased with the result that we decided to include it as a bonus track on the album.

Symphonic metal isn’t new anymore, do you feel sometimes, and specially when writing new songs, the pressure for not repeating yourself?

I do not feel it as a pressure, it is more something that is in my nature as a composer, a necessity. I always try to renew myself with every album. Some fans love that and others have problems coping with it. We are all different.

How big was the impact of the covid-19 pandemic in the recording of the new album? Was it complicated?

Yes, it complicated things quite a lot. Especially the travel restrictions were hard to deal with, they were unpredictable and changed a lot during last year. We as a band are spread  all over Europe, so that made it even harder. As a result I ended up doing a bit more of the stuff on my own for this album. In the end I am happy with the way it turned out. Our album sounds fresh and modern to my ears, and quite different to any other band out there ay the moment.

Live music seems to be, still, just a dream in a horizon. What are your expections? When you expect to bring these new songs to the stages?

My hopes for 2021 are not that high, to be honest. In terms of live shows we hope that we will be able to get back on stage by the end of the year. Hopefully sooner, but that does not seem so realistic as of now.

Since all this started, it feels it was on another life, it feels so much happened that it’s surreal. Music is one of our safety rescues, preventing that we go insane but it feels that more than ever that the music is facing some kind of extinction, with bands, technicians, promoters, venues becoming more and more despair. Do you feel that there’s a way out of this, a way to readapt and evolve?

The pandemics have been absolutely devastating for the music industry. I wonder what is left when the pandemics are over. I try to take one week at the time and spend as much time as I can in the studio. Hopefully the vaccination programs will be a success, so we all get get back to living our lives again, and not just exist, as we do now.