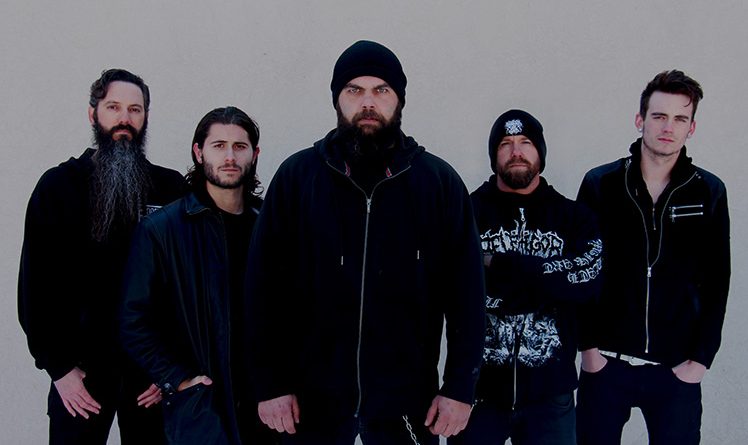 Skinned is one of the precious treasures the U.S. death metal scene has kept since 1995 and now they’re back with the excelent “Shadow Syndicate”, one of the great releases of the brutal death metal genre in 2018. World Of Metal reached out to Travis Weickum, guitar player and also vocals from death metal masters Skinned. By Sandra Santos.

Hello and welcome to the World Of Metal.  The last album Skinned recorded was 3 years ago (“Create Malevolence”). The time you took to release “Shadow Syndicate” is related to the changes of the members of the band, namely bassist (2017), drummer and guitarist (2018)?

Greeting! Yes, that is some what correct, some of the time it took was actually writing the album and touring.

How were the recording process went this time? Smooth? And how do you see and feel it now that it’s finally done?

This time we recorded with Dave Otero in Denver, and yes it went smoothly and we are very happy with how it turned out. It was really nice being able to just create and play for me this time instead of working on the production side of the recording this time.

What’s the feedback you’ve been getting from this new album? What are the reactions you’ve been collecting?

So far we’ve had great feedback and it seams like people like different aspects of the album. which is great!

We can see that there have been changes in the type of art used on the last releases, less identifyable with the brutal death metal you play and more sophisticated and less obvious. Was that your goal?

Yes in a way. We wanted something new, dark and fitting for the theme of the album. We knew right away once we saw the art that it was perfect for what we wanted, just had to tweek it a bit to put our flavor on it.

What does represent the cover of “Shadow Syndicate”? Who is this shadow syndicate? It seems is kind of related with religion…

It’s about conspiracy theories, aliens and alien abductions, unsolved mysteries, and secret societies. The name and the art relate to the elite secret societies pulling the strings and causing death from behind the curtain. It’s your first release by Xenokorp, your new label. How’s it going so far?

So far they have been great! Very into helping and caring about the bands on their roster!

The music video for the song “Wings of Virulence” was shot on the dark volcanic shores of Iceland. Was the choice intentional or a coincidence because you were performing at the Reykjavic Metal Festival?

It just so happened that everything fell into place for us to be able to do it there.  Paul McGuire or video guy who also filmed “We are the End” video just happen to be going there for some other work and Our friends in Severed from Iceland made it all possible because they let us use their drums and helped us get around to get it done.  We flew in our friend Simon from Italy to shoot his part at the end of the song. it all worked out great… not easy.. but great! (Laughs)

You recently toured Eastern Europe. How did it went? Well? How did the new songs received by the public?

It went well! We’ve never been to the Balkan countries before so we didn’t know what to expect but response was good and people seemed to really like the new material!

The fact you’ve played for 13 days in a row in different cities and countries, with a different time zone than yours, had any influence on your performance?

No, we arrived a couple days early and was able to adjust pretty quickly. It always seems like returning home is the worst as far as getting re adjusted to the timezone again.

How about the culture of death metal fans: male/female ratio, the age of the audience or the etiquette in the mosh pit. Have you noticed changes over the years and does it change depending on which country you play in?

Not really, it all seems pretty much the same everywhere we’ve been. Its usually a good mix of ages and male/female ratios.

Thank you so much for this interview. Greetings from Portugal!

Thank you for your support! And, that you to the readers taking the time to read up on us and for following WORLD OF METAL! Cheers!