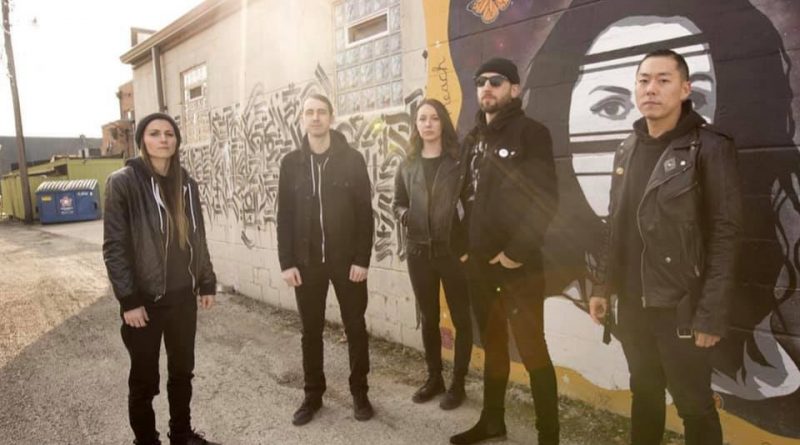 The honor and pleasure of doing this job is getting to know bands that you didn’t knew before. Bands that can surprise us by presenting a breath of fresh air with their music. And in that aspect, U.S.’s The End Of The Ocean conquers. Mixing post-rock with metal ambiences and instrumental music, “-aire” is an absolute must have in any music lover audio library. As always, World Of Metal wants to bring you the best, here you have it, The End Of The Ocean. – Fernando Ferreira

Hello guys and welcome to our World Of Metal! I’m stoked to be talking to you about “-aire”, a great album, and I’m not the only one to think that. Proud of what you’ve been able to achieve with this one?

Absolutely! This record has been a long time coming and we’re super happy with how it turned out and the feedback that it’s been receiving.

“-aire” took seven years to be released and it is somewhat a departure of what you’ve done before that leves me to two questions that may or may not be connected. The change in sound was what caused the long time in releasing it? And did you felt stuck creatively after the previous album?

The main culprit for the long delay was simply time and distance – Trish lives 3.5 hours away in Michigan so practicing isn’t as simple as everyone just having some random free time and meeting up on a whim. The change is sound was organic and just happened on it’s own. I feel like the record at it’s core still maintains our style pretty well but there is definitely quite a bit of branching out that we did too – we simply wrote songs that we enjoy and think sound solid. -aire is also our first album with Trish even though she joined the band like 6-7 years ago so it was awesome writing with her finally.

What were the primal influences you took to make “-aire” a different take on The End Of The Ocean’s music?

I think it’s safe to say that most of us at our core have a solid sense of anger/rebellion brewing which in turn gives us a solid sense of freedom to truly write for ourselves with zero intention of specifically aiming to cater to any certain sound/style. On the total flip side of that though we are super light hearted and don’t take ourselves too seriously – I think that vibe shines through pretty obviously in “jubilant”. Feelings of nostalgia, melancholy, and hopefulness are also sprinkled throughout the record.

Recording with Mike Watts and the crew at Vudu Studio was a blast! Mike and Frank really picked up on the sound we were going for right away – monstrous heaviness but also dynamic and gentle melodies to counteract those parts. Contrast is crucial and they did an amazing job capturing that. A big change we made on the fly in the studio was tracking a lot of baritone guitar to back up the heavier chord-laden parts of almost the entire record. That was something we initially only wrote one song around so having to track an additional 8 songs of guitar with zero preparation on my end was stressful at first but more than worth it in the end.

Knowing that there is a difference between this new material and your previous work, what are the reactions you’ve gathered so far from your fans?

The reception has been super positive so far. We were prepared for some fans feeling disappointed due to the different direction in sound but luckily people seem to be digging it overall.

“-aire” feels like that kind of music that you can relate to. It seems to fit perfectly as an soundtrack our troubles and challenges that we face from day to day. Which it’s not easy for an instrumental band to achieve. Does the music serves as an escape and exorcism? Don’t you feel the need to have lyrics to make that exorcism grow deeper? (Not that I’m complaining about it, because I love instrumental music, just curious)

Absolutely – especially live, the songs are beyond cathartic and serve as a huge release for us. One of the things we shoot for is to leave the songs/parts open ended so people can interpret them however they want – I think not having lyrics makes that a lot easier. We want people to tie their own experiences and feelings into the music rather than absorbing only ours – that way the music feels more relatable and personal.

Are you anxious to hit the road and show the new music to your fans? Is there already any plans to come to Europe?

Most definitely! We knocked out one small run this year with our friends Tides of Man which was a blast and we’d love to do more. Plans for the rest of the year are loosely in the works with nothing confirmed at the moment – stay tuned and we’ll likely be announcing something at some point in the near future.

Post-rock is viewed by some people to be a dead end creatively but you’re the perfect example to prove that otherwise. What do you think of the scene, not only locally but generally nowadays?

As a whole I think the genre definitely seems to be expanding and gaining a little bit of steam – I’ve definitely noticed that over the past 9 years we’ve been doing this. Creatively I think it’s total freedom. Sound wise there’s so much you can do under the post rock/post metal/instrumental/whatever the hell you want to call it genre – it’s not confined to standard verse/chorus/verse/song structuring and without vocals it’s a fun challenge trying to figure out how to convey emotion just via your instrument. The unspoken “rules” a lot of critics and fans seem to subscribe to really don’t make sense to me though – a lot of reviews for post rock stuff seem to be either “this isn’t anything new at all and it’s too bland” or “this is different and too far off the beaten path” – it makes absolutely zero sense to me.

What do you feel that it is yet to be done by The End Of The Ocean as an objective?
I’m not sure – I honestly never saw what started out as a little bedroom project getting nearly this much steam behind it so we’re just taking it one step at a time and being beyond grateful for everything we’ve been lucky enough to do so far.