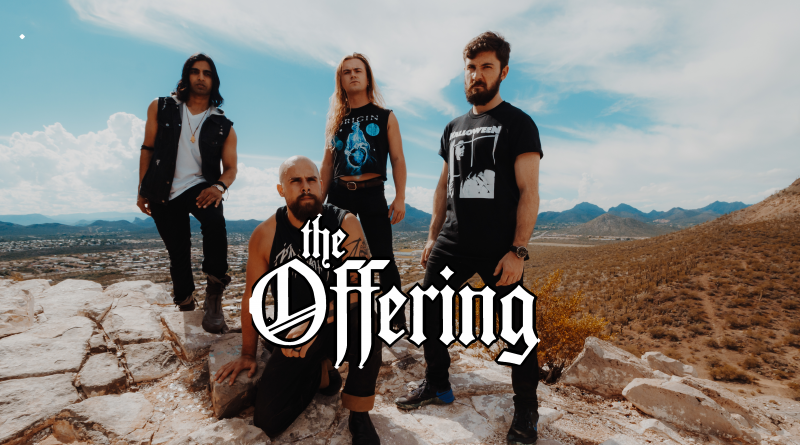 The Offering blasted through everyone’s ears in past August, with their unique approach to metal (from the more extreme to the more traditional) on their debut album “Home”. After such an impact, World Of Metal was bound to approach the band and talk with Nish (guitars) and Steve (drums). By Fernando Ferreira

Hello guys and welcome to our World Of Metal. Your new album is ready to be released in the 2nd of August, by Century Media Records. Exciting times you’re all living I imagine.

Nish – Yeah, absolutely exciting.  I’ve never been in a situation with a band where there’s so much going on that I have to plan months in advance in regards to social media postings, tour scheduling, advertisements, videos, partnerships, interviews etc.  Hearing the great reception and reviews from magazines that have received the advanced copy is especially pleasing.  There’s so much that goes on behind the scenes of releasing a record like this, it’s a humbling experience.

Steve – Same. I’ve been part of a few releases at this point in life, but nothing with quite as much hype behind it. I can tell people are excited to hear the new material, and we’re just as excited to show it off!

Before talking about “Home”, how did you reach to Century Media Records?

Nish – We actually didn’t reach out to them ourselves.  Kelly Shaefer from Atheist is a great supporter & friend of our project and did us a huge favor in putting us contact with the A&R department at Century Media.  Our relationship with our label staff has really blossomed since then, and I’m really honored that they are letting us release and record music the way we want to.  They’re doing their best and we love them for it.  Us having interviews like this is a privilege.

There’s definitely an evolution from the self titled EP to this album, since you reach many more colors, moods and ambiences in these sets of songs. That was the plan all along, that the debut album should bring more to the table?

Steve – For sure! I mean there’s no way we would’ve known what the full album would sound like back then, but I think we’re always looking to evolve. I’ve always respected bands that switch it up every album, as opposed to sitting in the comfort zone.

What amazes me more in “Home” is the way it sounds modern but it doesn’t stick to a genre that it’s popular. We can see that has metalcore influences on some aspects, but also thrash, prog or even traditional heavy metal. And that might feel that you are trying to reach everywhere, but what I feel is that you were able to set an identity of your own. Do you feel that too?

Nish – I think so.  I was constantly encouraging everyone to think for themselves when it came to their parts.  In songwriting this time around, I didn’t even care so much about whether new listeners, my bandmates, or the label would like it.  I just cared about writing the album I’ve always wanted to make since I was a kid.  It just so happens that, after three years of us being a band and developing our chemistry, we had come to realize that we had the same goal.  There was so much authenticity in it that it was liberating.  It forced us to be the best version of ourselves instead of chasing a fantasy, and I think that was the real secret to making “Home” so unique.

Yet on the wide range of styles and sounds… if you had to, what would you say that were the main influences for this album? Might not be directly but that you feel that was important to achieve “Home”.

Nish – It’s hard to narrow the whole band to a few influences.  We each have such different choices that it’s hard for us to pick one band to listen to during tours.  Luckily, I share a lot of common ground with each guy in the band, so I always try to cater the writing to each person’s strengths.  The wide range is made possible because everyone in the band speaks the language of music so fluently that they take any idea on the table and run with it.  No music is off limits for us, but we do prioritize a sense of emotion which forms the backbone in “Home”.

You’ve recorded in the Carriage House Studios and it was mixed by Fredrik Nordström on his Fredman Studios. Who produced it? Were you guys that did it yourselves?

Steve – Nish did it. Nish will probably never bring it up but he basically worked himself to death over the album. Everything from tracking, to helping each person in the band record, and bounce ideas off of. It’s crazy how much work goes under the title of producer. We’re really lucky to have someone who can handle all of that in the band. It’s MUCH easier to work with, and I think it makes a big difference in the sound.

You’ve been a fierce force on stages and I think that after “Home” being out there that it will bring more opportunities. What strikes me most is the way you play with the most diverse type bands ever. And that leaves me with curiosity… what would be the most perfect band, in your opinion, to go on tour?

Steve – For me? Dream Theater. or Periphery. I’m a Prog-nerd at heart. I’d be so stoked to see them play every night, and I feel we could be a good fit. Plus, their fans would definitely appreciate our music.

Talking about touring, any plans in coming to Europe?

Nish – We’re actually doing this interview on tour in Budapest!  We’re playing here and a couple dates in Germany next, including Wacken.  Europe has been nothing but great to us since we got here, so we absolutely expect to be back here before you know it.

It’s common opinion that the second album is always more difficult to do well than a debut. Being your debut “Home” this huge juggernaut, I guess it leaves you self-assured about the future, right?

Steve – (Laughs) Possibly? I mean yeah there’s definitely going to be some expectations going into the next one. I’m fairly confident we’ll deliver, but I’m mostly interested in following our creative voice. I think bands do their best work when the external world isn’t part of the equation; when they just do their own thing. At the end of the day, I want to make music I want to hear. What people think of it is a side effect, not something that drives creativity.