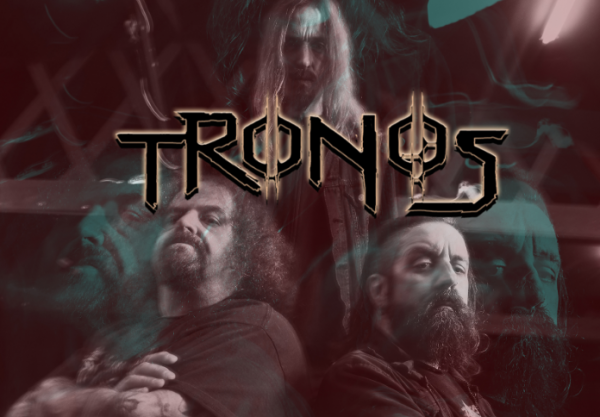 This interview was a real rollercoaster to happen, but all the gods of metal smiled and conceded us the chance to talk with legendary Shane Embury (from Napalm Death, Lock Up, Brujeria, among numerous other entities) about his latest endeavor, Tronos. – By Fernando Ferreira / Photo Gobinder Jhitta

Hello Shane and welcome to our World Of Metal! It’s a great honor for us to be able to talk with you about your newes musical endeavor: Tronos. So I guess, let’s start by the beginning. How did turn up the idea for Tronos? Was it something you’ve wanted to do with Russel for a long time?

Me and Russ have been friends for over 20 years and toured together and recorded together a lot – there were many conversations about our similar influences and we often talked about mixing ultimate heaviness with blissful ambience, so I guess that was the very beginning of the concept that eventually became TRONOS.  It was always an evolving project, we talked through the ideas so many times that when we finally tested it out it all just fell into place.

And also the name Tronos, how did it came up?

We were searching for a name for a long time and I came upon the word which is Spanish for thrones, in the songs we often talk about the idea of unseen gods and governments ruling over us from their high thrones so it seemed to fit perfectly with the whole concept.

Being so notable to participate not only in one of the biggest and most notorious extreme metal band in the world like Napalm Death but also in many other projects and bands like Lock Up and Brujeria, what is that Tronos can offer to get you excited about it? Besides working with all the great names we’re goint to talk about ahead?

I would say for me and for Russ as well it’s the chance to truly express the many different influences we have and also lyrically to delve into tales of our lives and experiences as we both believe they are connected.  It’s a very free and motivating project.

Like I’ve said, you had a real showcase of talent for “Celestial Mechanics”, starting with Dirk, for the drums. How did he joined the project?

I met Dirk sometime ago when he was in Soilwerk and we got on from the very start he is always enthusiastic which I like and be added a lot to the songs in my opinion they really started to grow and take form once he recorded the drums.

“Snake” is also a great add to the mix as also Erica Nockalls. Were they chosen because they fit perfectly on the music (which they do) or were they also someone who you wanted to work for a long time?

I have loved VoiVOD forever and when we toured together I played Snake some of the demos and he liked it and agreed to participate, which for me was amazing, he totally gets the project, and Erica too, they both seemed to instantly understand what we were trying to achieve.

This time you’re on the guitar while for the bass you had three heavy weight guests. Billy Gould, Troy Sanders and Dan Lilker. How was it to work with them for this record?

Well I have known all those guys for some time and they added their own touch which is what i had hoped for a lot of this was done via the internet and They were given free reign to experiment, and they all added some extra magic to the album, for which we are eternally grateful.

Tronos music defies categorization. In a time and age, where all is tagged ready to be consumed, how would you label Tronos?

Experimental and ethereal journeys through the sonic landscapes of emotional trials (laughs)!!

The album is being released by Century Media. Was it your first choice, did you had offers from other labels?

There were a couple but C.M. seemed to be the best choice for the record.  We’ve had a long and successful relationship with them with other bands and projects so it just seemed obvious.

I know that because of the nature of this project and all your commitments, that it will be difficult to go on tour but that you are eager to do some special shows. Would you prefer to do some shows on clubs or would you do festivals also?

I would not want to tour but play special one off shows and also this should be different from usual live experiences as the songs can be rearranged so it becomes unexpected.

“Celestial Mechanics” has a deep and strong concept that I think that you have somewhat touched previously in albums like “B.I.B.L.E.”. And there is so much we don’t know about space, about life and death itself, about the human potential… my question is, aren’t we becoming arrogant in our achievements as we walk to a dehumanizing society that we don’t realize how small we all are in the great plan of things?

We are less than grains of sand but we are mighty powerful in our own ways, despite things looking ultimately bleak for us its still possible to stay positive.  Drive and determination without greed and with respect for all others along the path are key to change and to moving forward. We talk a lot about the realities of leaving our planet, both in the obvious physical sense or in an out of body journey to the source, back to pure energy, to truly escape, we reflect on our lives up to now and how we envision the rest of our journey, the immediate life ahead of us and far beyond.  With age I think you start to get a clearer glimpse of the things ahead, you just have to keep open eyes and open mind to see it.