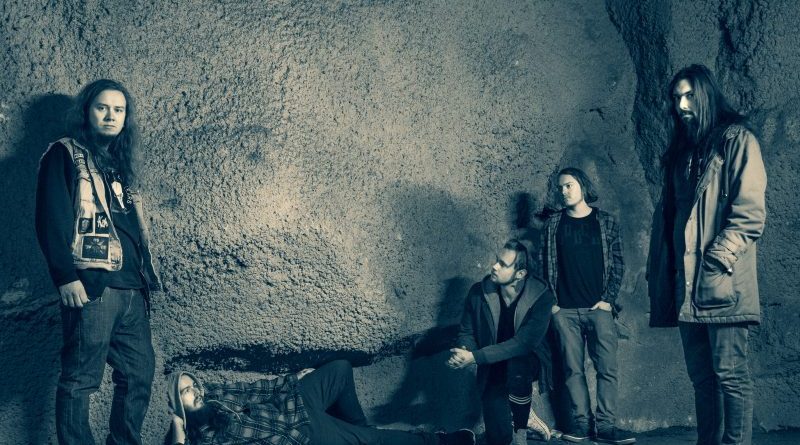 Heavy music has many forms to manifest itself. More than ever, labels loose their utility and a band like Underwing helped that by releasing music like the one contained in the norwegian band’s latest EP, “Spirals”. Fusing different sonic fields that go from stoner, alternative to progressive landscapes, this is a band that shows how rich is heavy music nowadays. World Of Metal got together with almost all the members in the band (Enyeto Kotori, Thomas Myhren, Jesper Murphy and Magnus Christiansen) for an interesting talk that we show below. – By Fernando Ferreira / Photo by Dan Kristiansen

Hello guys and welcome to our World Of Metal. “Spirals” is your latest release and brings forward your own kind of alternative progressive heavy sound. How has been the reaction to it so far?

Enyeto – Hey, thanks for having us! We’ve been playing all the songs that turned into “Spirals” live for a long time, so it’s great to finally share them with the rest of the world! The reaction has been overwhelming really. Reviews from all over the world, local press, interviewers and fans all seem to dig it, contributing to our continuous love for what we do!

Thomas – The reaction towards “Spirals” has been really uplifting! We’ve seen reviews and comments from all over the world in a lot of different languages. What’s been really cool is that a lot of people can hear our influences through our music, while also appreciating the Underwing-flavour we bring to the alt-prog heavy sound.

Magnus – It has been overwhelmingly fantastic! Since we’ve been touring a lot this summer, we’ve gotten a lot of feedback “directly”, if you want, from all the wonderful people attending our concerts!

Jesper – There’s been so much good feedback it’s unbelievable. I think the most common negative feedback has been «it should have been longer»!

Agreed! We know that right now you’re on a tour in your own country. Any perspectives for reach to other country besides your own?

Thomas – We really want to travel to as many countries as possible and spread our music to the world. But there are financial limitations to being an independent band.

Magnus – We’ve got plans, but it takes a lot of time (and money!) to route a tour and especially abroad – All in due time.

Jesper – It’s definitely something we’ve talked about and want to do. We know we have followers all over, but there hasn’t been a good opportunity yet.

Enyeto – I would love to tour outside Norway, and I am pretty sure we will after a few more pieces fall into place. Meanwhile, we focus on winning over the Norwegian audience.

“Kaela Upsweet” was a great release and was extremely well received in your country. Did it set any pressure for “Spirals”?

Thomas – It didn’t really set any pressure for “Spirals”, but we wanted “Spirals” to feel like a evolution of what we did on “Kaela Upsweep”. We wanted it to sound bigger, better, fatter and more experimental, and in that regard I think we succeded.

Magnus – I didn’t feel any pressure, we’re making music mostly for ourselves and we’re not aiming to please anyone – that kinda eliminates the whole “pressure” thing. It’s always a little nerve-wrecking to read reviews, but most have been good so far so I haven’t really thought about it.

Jesper – I don’t think there was that much pressure as far as quality is concerned, as we were all confident that we’ve taken a step up. I feel like there was more pressure in terms of time, people just wanted the new stuff to be out! Including ourselves, if I’m honest.

Enyeto – Personally I don’t think it did. Some of the songs on “Spirals” were written even before the ones on “Kaela Upsweep”, and others closely after the release. We also played them live, mixing them into the set giving off the impression that all these songs were connected. So when we finally released “Spirals”, we knew most of our fans would feel that very connection.

“Spirals” show us a exploding and emerging band, ready to conquer the world. Is it the right moment to release your debut album?

Magnus – We are currently writing and preparing the initiation of what will become our debut-album, so THIS is not the moment to release it, not THIS one either – All in due time.
Jesper – This is a question that keeps popping up. We have a very clear concept of what we want to do with it, but we’re not rushing the material. You never get a second chance at a debut album, so we want to make sure that when we get there it’s as good as we know it can be.

Enyeto – Is there ever a right moment unless you create that moment yourself? Should we wait around for someone to open the doors for us before we come marching in? I believe that we have to open up that door ourself.. kick it in rather. It all comes down to if we, as a band, are ready for it to be the right moment or not.

Not only your sound rocks has there’s a sense behind the lyrics. Can we say that there’s a concept the unites all the songs on “Spirals”?

Enyeto – The concept revolves around the spiral of life. Spirals are one of the oldest symbols we know of. They symbolize the slow reveal of things that are hidden. It can mean growth and evolution. They could represent people coming back to the same point in their life, but with new and better kinds of understanding. The symbol of the spiral can push the viewer to be flexible and have trust when things change. The ancient spiral would represent the way the universe would evolve. It would also symbolize female energy, fertility, and womb. As well as constant change. All of this is reflected in the songs, where each songs has it’s corresponding element attached to it.

You’ve been conquering Norway thanks to a lot of hard work and lots of concerts. What do you prefer, the stages or the preparation and recording for a new release?

Thomas – I really love the creative aspect of working in the studio, the process of putting all the individual pieces of our sound together into a song is really exciting. But what I love the most is standing on the stage and feeling the adrenaline of playing songs I really love to a dedicated audience.

Magnus – I like playing shows the most, because it’s so intense you know? That raw energy from the crowd and the other guys in the band, the sudden realization that WE’RE the ones in charge for them shouting with excitement. It’s fucking crazy and I’m scared and excited at the same time while doing it. The studio is cool, but I prefer the whole experience with playing live, chatting with fans, eating with the band backstage and just the whole “gig-mentality”.

Jesper – I’ve always loved being on stage, I feel more at home there than almost anywhere else on earth, so that’s my favourite. At the same time there’s something magical avout seeing you vision take shape in the studio, finding all the missing pieces that can only be done while recording. I’ve found that, at least in Underwing, a song is never done being made until we finish recording it.

In that sense, there’s always a sense of live, organic music on your songs, something that I dare to say are not so usual in modern music. It couldn’t be any other way, right?

Enyeto – I’ve always categorized us as a live-band. We just work better that way I guess. There’s something about the energy on stage compared to the dull studio vibes you know? It just brings out the best of us when we can feed of the audience!

If you’ve got the chance, what would be a dream slot in a tour for you? What would the bands you loved to tour with?

Thomas – I would’ve loved to tour with bands like Tool, Gojira, Alice in Chains and Mastodon. Because those bands have influenced a lot of aspects in our music.

Magnus – Holy shit, where do I start? I’d love to be a part of something like “Warped Tour” in the US..I think it’s no longer around, sadly. But I’m sure there are other concepts like that around. Just touring with other up and coming bands would be sick. I’ll also mention that having a support slot on a tour with for example TOOL or Gojira would be sick.

Jesper – How many pages can I fill on this question? Tool, Motorpsycho, Kvelertak, Gojira, Opeth, Alice in Chains, Queens of the Stone Age, System of a Down and many many more.