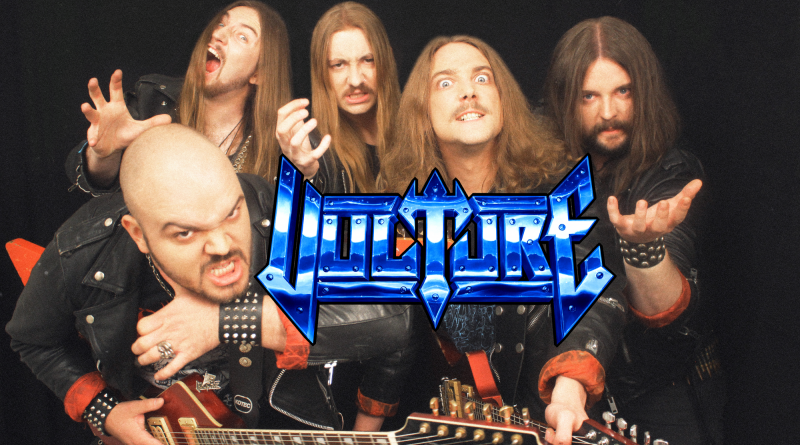 There’s no doubt that the traditional metal is alive and well, more than ever but Vulture is one of the bands that really sets the standard high! After a great debut album in “The Guillotine”, Vulture is back with a sophomore album that can set on fire any one who truly loves speed metal. “Ghastly Waves & Battered Graves” was the main subject on our talk with L. Steeler, frontman of the german band. – By Fernando Ferreira / Photo by V. Star

Hello Steeler and welcome to our World Of Metal! Let’s start by saying that “Ghastly Waves & Battered Graves” is a hell of an album! I’m sure that it will bring your name to more and more heavy metal fans. For many it will be a new name, so for those that might not know how you, tell us how did Vulture were born?

Thank you for having us! The fire was sparked in early 2015 while we had the vision of grabbing classic Speed and Thrash Metal by it’s very roots and tried to comprehend what made fans of Judas Priest, Iron Maiden and several NWOBHM bands go the next step to create what was later labeled Speed and Thrash Metal. We played in several bands together before, so we already knew each other as friends and in terms of music. Soon after we started developing ideas which later became our first demo “Victim to the Blade”. High Roller Records offered us to re-release this demo as an EP and one year later we released our first full-length called “The Guillotine”.

“The Guillotine” was your first album, released by High Roller Records. How did you came to the attention of the mighty Metal Blade Records and what it means to you to belong to their roster?

That’s a pretty unspectacular story I’m afraid (laughs). It was shortly after the release of “The Guillotine” when we were approached by Metal Blade and were offered a multiple album contract. Since it has always been a huge dream for us to sign with this legendary label we were totally stoked! After a few negotiations the deal was sealed. We feel very welcomed and in good hands, both blades are sharp and ready to kill.

After the debut, did you had an objective for the new album? Felt any additional pressure because the reaction “The Guillotine” had?

We heavily discussed the way we want to sound like after “The Guillotine”. We came to terms, that we should start allowing more mid tempo parts and also giving our riffs more time to unfold in general. We also really dig the melodic aspects we introduced with our first album, so we worked those out more as well. Personally I felt more pressured with “The Guillotine”, because people still didn’t really know what to expect from us and “Victim to the Blade” hit in like a bomb before.

Tell us about the production of the album, where did you recorded and with whom? The final result you had present was obviously have that organic vintage feel, right?

The album was recorded once again at Hellforge Studios by our good friend Marco Brinkmann. We’re more than satisfied with our cooperation. He really knows what we want to sound like and is always able to set the right direction for a recording. Marshall amps, pounding roto-toms, deadly delay on vocals – we’re indeed pretty dedicated to that 80s Metal sound.

Also, the cover seems to throw us back to the glory days of heavy metal. Had a clear idea of what the cover should be? Is a clear illustration of the title track, right?

The cover artwork was painted by Velio Josto, with whom we’re collaborating since day one. His style of oil-painting in the vein of old horror movie artworks fits perfectly to us. We wanted this cover to be the perfect mood-setter of what’s about to be spinned on the turntable. So yeah, it’s indeed literally based on the title track.

Reactionwise, how has been the reception to “Ghastly Waves & Battered Graves”? Do you feel you’re reaching an wider audience?

We’re happy and pleased by every feedback we get, either it’s positive or negative. Especially hearing people’s response after playing the new songs live and possibly even achieving new fans as a result feels fantastic. Metal Blade definitely took us to the next level when it comes to publicity.

We know that like many heavy metal bands, your activities in the band are part-time. Do you have, as an objective, to reach the point when you can focus on the band 100%?

We’re all more or less busy with full-time jobs and other duties. Nevertheless we put all our efforts, passion and free time together and it worked out pretty well until now. But who knows how the future will look like. (laughs)

Even so, how about touring, what do you have planned for promoting live “Ghastly Waves & Battered Graves” and where you expect to go this time?

We’re definitely looking forward to join forces with mighty RAM in September touring throughout Germany and bordering countries to promote our new album. We just joined the roster of Dragon Productions and hope to play as many shows and festivals as possible in 2020 around Europe and beyond.

Heavy metal is growing strong in the underground. Being part of the scene, do you agree this is the best moment for the genre in years? What must change so that the scene can grow even more and stronger?

Definitely. Especially in Germany there are more and more small festivals and gigs raised up and organized by Heavy Metal fans every year and you literally feel that the scene is getting stronger than ever. A lot of new young bands came up in the last couple of years to play traditional Heavy Metal in particular. If it will continue like that I don’t see any changes to be necessary.