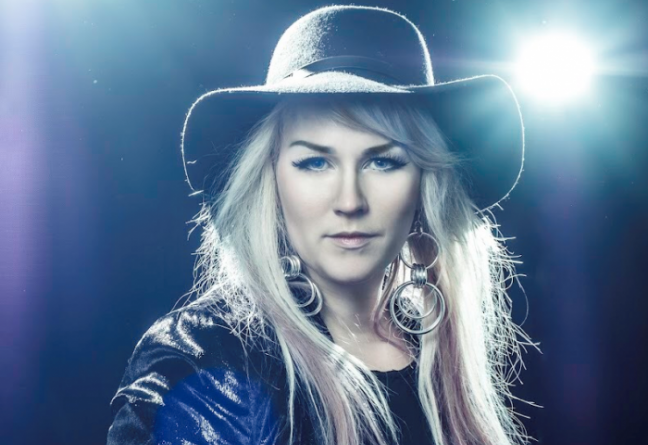 WOM Profile will focus today on the great finish singer Noora Louhimo know as her work with Battle Beast and also Mute Swans. We’ve talked about singing technics, about idols and about his own vocal coaching endeavour Sing Like A Beast. We talked about music, as you can check it out below. – By Carlos Ferraz / Photo by Robert Frankó

You have a very “Joplinesque” style of vocals(in my opinion) which I of course love as metal purist but can you give a bit of a breakdown of your vocal technique and how you “found” your voice?

Long story – I’ve developed my voice since I was a little kid. I always loved to imitate my idols such as Whitney Houston, Shania Twain, Celine Dion, Michael Jackson and Tina Turner in my early years. Later on my favorite bands became AC/DC, Led Zeppelin, Queen and lots of great rock bands. I am a  huge fan of blues (Bessie Smith, Howling Wolf etc.) , jazz (Ella Fitzgerald, Louis Armstrong etc.), soul (Aretha Franklin, James Brown etc.)  In my twenties I found my first band ”Admiral Octopus” from a local bluesbar in my hometown and back then I was introduced to Janis Joplin’s music and voice – I was blown away. Her voice and charisma made a huge impact on me and I wanted to do what she did. So that was when I developed my raspy sound by crunching my voice to the limits for about a year, just to get the right kind of sound in my voice. Back then I didn’t know the right way to do it economally but nowadays I know and teach it to others. I started listening heavy metal music when I was about 15 years old, my big brother, a singer as well, introduced me Iron Maiden, Dio, Dream Theater, etc. But back then, I didn’t think I would be able to be a heavy metal singer. After Admiral Octopus broke up I started doing a lot of different jobs as a singer – Acoustic gigs, backing vocals, demosessions, guest vocals in different bands and got in the ”circles” in my hometown by the help of a musician friend of mine.

What was your very first audition like when you put yourself out there as a new vocalist?

The Story continues – After couple of years multitasking as a singer I took part in a singing competition ”Wanna be a rock n roll star” in a local bar and won it by singing Janis Joplin’s version of ”Piece of my heart”. This song is very important to me, because everytime I’ve performed it, something great happens in my career. I like to think that if there are guardian angels, Janis is mine (Laughs). By winning the competition there was custom made song for me, picked by me, it is called ”Relax”, written by J. Riitaluoma. That song became my first single ever. You can find it in YouTube.

Looking back over your releases and music you have put out… which is where you see yourself at your best OR do you feel you keep getting better with time?

I’m at my best when I can do what I want (laughs). I love to be able to sing any kind of genre. There is still a lot to learn and will to develop my singing but that’s the charm in this, you are never ready. To be serious, I’m at my best on stage, I think.

I drink mint tea and Green matcha…amongst other things…what are your go to treatments for keeping those chords moist and safe?

Sleeeeep and ginger-lemon tea and water. And more sleep.

With the advent of set vocal techniques there seems to be so many vocalists that sound the same… NOT in your case (laughs) but what are your thoughts as a coach when you see people just copying techniques rather than finding their voices… I know its complicated answer but just try to simplify?

In my opinion you can’t copy anyone but you can try imitate your idols and it is important part of finding your own voice. I could talk about this issue for hours but I leave it for my future Sing like a beast-seminars (my vocal coaching concept). Just like any other musician – singers listen and want to learn the things their idols do. Every person resonate differently anyways so you don’t have to worry about sounding like someone else.

Lyrically who is the main force for writing the lyrics? Are you a poet… or how do you get inspired lyrics wise?

In Battle Beast I’ve done little for now lyric wise, but still have the poet inside willing to do more lyrics for the band. Most of the songs for now has done Janne & Joona Björkroth (keyboardist & guitarist) and Eero Sipilä (bassist). I’m planning on being more part of the songwriting in the next album. I’m also working on my first soloalbum at the moment, with that I’m going bact to my musical roots and open my soul also lyric wise.

I grew up with many female rock icons…whom were great artists (and still are) and that wave was great both for showing there are no differences in the sexes but whom were your very early inspirations? (mine were all the 70’s female rockers like Joan Jett, Pat Benatar, Heart, etc)

Do you have any favourite vocalists out there?

What are your plans for the next 6 months… touring?

Battle Beast is touring in USA, Canada and Europe. Songwriting for the 6th album and for my soloalbum. Doing some sologigs in Finland ans spending time with my boyfriend, cats, family and friends.

Any plans to play in Portugal or the islands? or other Portuguese language countries?

Hopefully soon again we will come to Portugal and we haven’t toured in South America yet, so that would be in the bucket list for sure.

What are your favourite Nordic bands at present outside of the big brands? Anything up and coming you like?

What is your one big tip for any aspiring vocalists?

Keep doing what you love and never give up! Get a vocal coach and find all the knowledge you can get for your singing from internet, your idols and different literature. Thank you for the interview and all you fans out there remember to follow @battlebeastband and @nooralouhimoofficial and if interested in my vocal coaching @singlikeabeast.nooralouhimo in Instagram. You will find Battle Beast tours and merchandize from battlebeast.fi