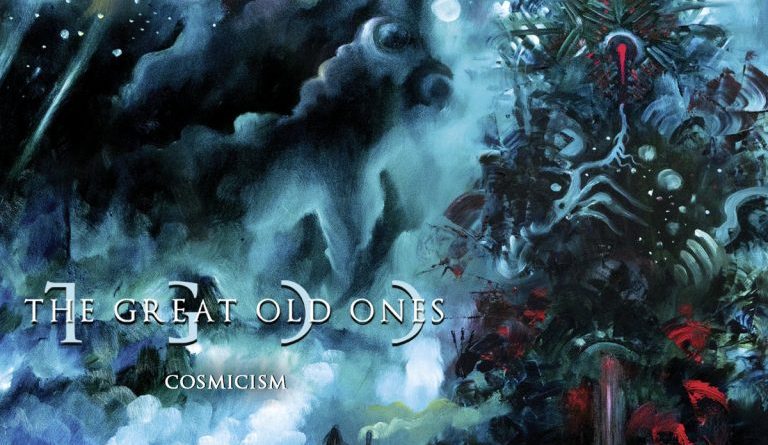 The Great Old Ones are a French black metal band dedicated to the propagation of cosmic themes once advanced by the legendary American writer H.P. Lovecraft and by his literary descendants. For those that don’t know, Lovecraft is/was the writer that created the “cosmic horror” genre that associates itself both with humanity’s insignificance on the existential plan of the Universe as well as with the existence of alien beings represented as evilly neutral gods – The Cthulhu Mythos (the name of the band itself derives from a more restrict group of these entities). With many releases since the year of their formation, The Great Old Ones now present their most recent project (and 4th album), Cosmicism.

There is a noticeable growth of the band since their (also good) last album, “EOD”. In this 8-tracked album, the band, once again, distances itself from the conventional roots of black metal themes (demonology and overall gore) and ventures in the fields of scientific horror and unreligious evil with tracks dedicated to the individual promotion of several of the entities I mention previously (“Yog-Sothoth” and “Nyarlathotep”, for example). As a follower of Lovecraftian fiction, I must say that it would be very hard to make a better dedication to his memory, in the way that both the lyrics and the environment that this band creates are a true embodiment of the horrors once described by the American Genius.

Instrumental wise, the band achieves the great feat of combining both the “heavy destruction” that one would expect of a black metal band and also the ambient that comes from contemplating the depths of existential horror alongside monstrous beings (some might even call this fusion of genres as post-black metal). Regarding the lyrics, you must be on the look at out as this album is riddled with very interesting works of fiction that really deserve the seal of approval by any Lovecraft fan, and who knows, maybe this one will be a case of new readers of Lovecraft because of the “depressive enjoyment” that they’ll find in this album. Overall, there are many different rhythms and sounds in the album and you actually feel different personalities in every track, as if they would represent different traits of each of these monstrous deities, so you’ll never feel bored over the course of the full album. By being a Lovecraft fanboy, I tend to be more critical about works that are based on him, because everybody has a different interpretation, however this is a vision (and audition) that truly seems to align with H.P. Lovecraft’s own perspectives, both growing the black metal universe and the “cosmic horror” field.